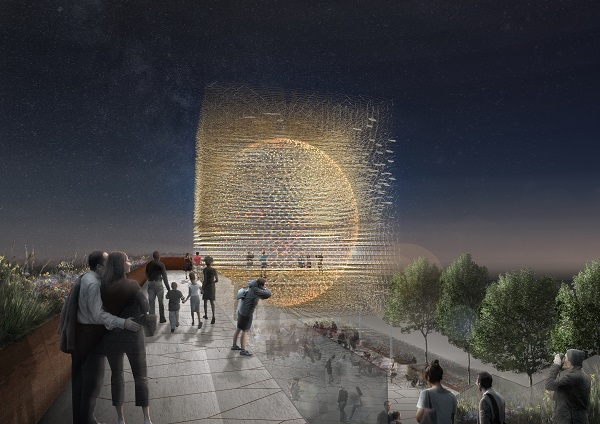 [quote]The design of the Pavilion includes some innovative structural solutions which allied with the focal attraction of the ‘Hive’ will delight the discerning visitor.” — Bob White, Chairman of Rise MC[/quote]

London, UK — A structure inspired by the unique role of the honeybee will represent the UK on the world stage at the Milan Expo in 2015.

At a ceremony in Rome on Sunday May 18, Prince Harry announced that Nottingham based artist Wolfgang Buttress had won the competition to design the UK Pavilion for the next Universal Expo. Prince Harry was taking part in the unveiling during an official visit to Italy in support of the British Government.

British companies Stage One and RISE have been awarded the £6 million contract to build the winning design, bringing together their creative construction and construction management capabilities. Together the winners represent Nottingham, York and London, with the contracts bringing new jobs to the 3 regions.

“Success in international markets is at the heart of the government’s long-term plan to build a stronger, more competitive economy.

“The UK’s participation in the Milan Expo will promote the UK’s world leading expertise in the creative, life sciences, agri-tech, and food and drink sectors to our top trade and investment partners.

“Through the UK Pavilion, we will reach millions of visitors and build on the reputation of the UK established at the 2010 Shanghai Expo and the London 2012 Olympic Games.”

Winning artist Wolfgang Buttress opened his first studio in Nottingham after graduating in 1987 and now employs 7 people. Over the last 2 years he has won numerous national and international awards, including the International Structural Steel Award for projects under £2 million in 2013. Earlier this year he received the Kajima Gold Award in Japan for his work ‘Space’.

“I’m happy and honoured that I have been selected for this prestigious commission. My wish is for visitors to engage with the UK Pavilion as a whole and for the hive to be recognised as a barometer for the health of the earth; drawing parallels between a hive and human society.

“I’m very excited to have this opportunity to work with such a great team, it’s an amazing challenge and one we will rise to together.”

Once the UK Pavilion is built, visitors will walk through a fruit orchard and enter a natural wildflower meadow. As they near the centre of the meadow, the focal point of the structure will come into view: a golden orb made of fine steel lattice based on the design of a honeycomb. The ‘Hive’ will pulsate and buzz with the noise of a real bee colony.

The UK Pavilion at the last Universal Expo in Shanghai 2010, designed by Thomas Heatherwick, attracted international acclaim and won gold for best design. In the duration of the 6 month Expo more than 8 million people went inside the ‘Seed Cathedral’, making it the UK’s most visited tourist attraction during that time.

“We are very excited to be involved in the UK Pavilion at Milan Expo. It enables us to sustain our particular interest in temporary structures, and allows us to continue our collaboration with Stage One on these project types.”

“We’re delighted to have been selected to construct the UK Pavilion at the Milan Expo. This is a significant project for Stage One and reflects our increasingly strong relationship with architects and designers. It’s a strong validation of our collaborative approach and our ability to deliver creative construction projects successfully.”

SPECIAL THANKS TO JAMES OGUL, EXPO CONSULTANT FOR IPM, FOR BRINGING THIS TO OUR ATTENTION. READ HIS NEWEST FEATURE FOR INPARK, “EXPO EXPLANATION,” HERE

Joe Kleimanhttp://wwww.themedreality.com
Raised in San Diego on theme parks, zoos, and IMAX films, InPark's Senior Correspondent Joe Kleiman would expand his childhood loves into two decades as a projectionist and theater director within the giant screen industry. In addition to his work in commercial and museum operations, Joe has volunteered his time to animal husbandry at leading facilities in California and Texas and has played a leading management role for a number of performing arts companies. Joe previously served as News Editor and has remained a contributing author to InPark Magazine since 2011. HIs writing has also appeared in Sound & Communications, LF Examiner, Jim Hill Media, The Planetarian, Behind the Thrills, and MiceChat His blog, ThemedReality.com takes an unconventional look at the attractions industry. Follow on twitter @ThemesRenewed Joe lives in Sacramento, California with his wife, dog, and a ghost.
Share
Facebook
Twitter
Linkedin
Email
Print
WhatsApp
Pinterest
ReddIt
Tumblr
Previous articleTom Hyland to Oversee Development Initiatives at USS Hornet Museum
Next articleVIDEO: Knott’s Berry Farm Enhances Classic Calico Mine Ride and Camp Snoopy