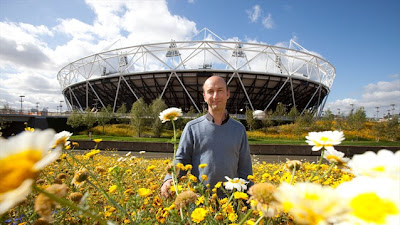 London, England (May 13, 2012) /PRWEB/ — After two years of trials and research, the UK’s largest ever man-made wildflower meadows were sown this week to flower gold around the Olympic Stadium in 77 days’ time.

The riverbank meadows of bee-friendly cornflowers, marigolds, Californian poppies and prairie flowers have been especially designed to flower late by international wildflower expert Professor Nigel Dunnett from the University of Sheffield. They will bloom gold just in time for the Olympic Games Opening Ceremony.

The sowing of the last of more than ten football fields’ worth of nectar-rich wildflower meadows marks the final preparations of the gardens, lawns, woodlands and wetlands that will provide the colourful setting for the Games and become a new park for people and wildlife for generations to come.

The bulk of the planting of the 4,000 trees, 300,000 wetland plants, 15,000 square metres of lawns and more than 150,000 perennial plants and bushes in the Olympic Park and Village was completed in the autumn by the Olympic Delivery Authority. Throughout the winter and spring the dedicated team of specialist gardeners and horticulturists have been battling the elements to ensure that the Park reaches its colourful peak this summer. This has included wrapping trees through winter and cutting back thousands of early-flowering plants so that they reach their best in July.

Across the UK experts and novices are getting together with friends, families and neighbours to ‘Garden for the Games’ and bring the excitement of the London 2012 Olympic and Paralympic Games to their area. Thousands have already signed up to be Local Leaders, pupils at Garnetbank Primary School in Glasgow have planted a wildflower meadow in their school playground and residents on Poplar, Tower Hamlets are brightening up their estate with wildflowers this summer. People can find out how to sow theur own wildflower meadow a thttp://www.london2012.com/localleaders

Seb Coe, Chair of the London 2012 Organising Committee, said: ‘After completing our successful series of London Prepares test events we are preparing the Olympic Park to host millions of spectators this summer. Alongside fitting out the venues, installing hundreds of temporary buildings and a range of facilities for spectators and the workforce we are putting the finishing touches on the gardens, lawns and meadows that will provide the colourful setting for the Games.

‘The wildflower meadows timed to flower around the Stadium in July are just one example of the painstakingly detailed and innovative work of the team of experts that have created the Olympic Park that will be enjoyed by spectators during the Games and for generations to come.’

Professor Nigel Dunnett, University of Sheffield, said: ‘After years of preparation and two practice runs we have sown the final meadows that will run like a ribbon of gold around the Olympic Stadium. In just a few weeks visitors to the Olympic Park and TV viewers will see areas of flat mud transformed into waist-high wildflower meadows buzzing with bees and butterflies. London 2012 is a great opportunity to get out and Garden for the Games by sowing your own wildflower meadow. With a bag of seed from your local garden centre you and your neighbours can quickly and cheaply brighten up your area and give your local wildlife a boost.’

Sarah Raven, presenter of recent BBC2 documentary ‘Bees, butterflies and blooms’ and author of ‘Wild Flowers’, said: ’There’s no better way to get almost instant colour and nectar into your garden than sowing an annual meadow mix – and with all this rain, it could not be a better time. Give the area a quick rake and then just scatter the seeds into any bare bit of ground in the sunshine. Within weeks the Olympic Park and potentially your garden will be ablaze with abundant colour as well as butterflies and bees, with all the food being provided. Do your own bit and join this brilliant initiative.’

Dennis Hone, Chief Executive of the Olympic Delivery Authority, said: ‘As we head towards the Games, the Olympic Park is really starting to take shape. In the space of just a few years, a predominantly neglected industrial area has been completely transformed as we cleaned and reshaped the land before planting thousands of trees and plants. The wildflower meadows are a timely reminder at just how close to the Games we are getting and their colourful depth and design is a tribute to the UK’s horticultural expertise.’

More than 10 hectares of annual and perennial meadows have been created in the Olympic Park, designed and sown to flower during the Olympic and Paralympic Games.

The annual meadows around the Olympic Stadium are a vivid combination of tickseed, cornflower, corn marigold, star of the veldt from South Africa, Californian poppy and plains coreopsis, which moves from yellow and blue in July to gold in August.

The meadows, which are sown on an annual basis, have been trialled during the last two years to perfect the team’s extensively researched technique of irrigation, late sowing and cutting back that will ensure the flowers peak for the Opening Ceremony in 2012.

A combination of shorter and taller perennial meadows, which require only a single seeding, were sown two years ago across the Olympic Park to allow plenty of time for them to establish before the Games. Many of these seeds were frozen to trick them into thinking they had over-wintered to quicken germination and ensure they flower in time.

The meadows have been designed to be nectar- and pollen-rich, diverse, and with a long flowering season to encourage a range of bees, butterflies, birds, moths and other insects. Specific plants and flower species have been selected to encourage particular wildlife – for example, the marsh fritillary butterfly needs devil’s bit scabious for its caterpillars and burnet moths congregate around knapweed flowers.

The meadows are being sown in specially designed low-nutrient soil, with a high sand content, to ensure a diverse mix of flowers and to discourage weeds.

After the Games the meadows will gradually incorporate a range of grasses, naturally and through oversowing, so they become self-sustaining and support particular butterfly larvae such as meadow brown.

Joe Kleimanhttp://wwww.themedreality.com
Raised in San Diego on theme parks, zoos, and IMAX films, InPark's Senior Correspondent Joe Kleiman would expand his childhood loves into two decades as a projectionist and theater director within the giant screen industry. In addition to his work in commercial and museum operations, Joe has volunteered his time to animal husbandry at leading facilities in California and Texas and has played a leading management role for a number of performing arts companies. Joe previously served as News Editor and has remained a contributing author to InPark Magazine since 2011. HIs writing has also appeared in Sound & Communications, LF Examiner, Jim Hill Media, The Planetarian, Behind the Thrills, and MiceChat His blog, ThemedReality.com takes an unconventional look at the attractions industry. Follow on twitter @ThemesRenewed Joe lives in Sacramento, California with his wife, dog, and a ghost.
Share
Facebook
Twitter
Linkedin
Email
Print
WhatsApp
Pinterest
ReddIt
Tumblr
Previous article
Small Museum in Novato Offers Bay Area Children New Way to Experience Space
Next article
Dark Knight’s Tumbler and Bat-Pod on National Tour Co-Sponsored by IMAX