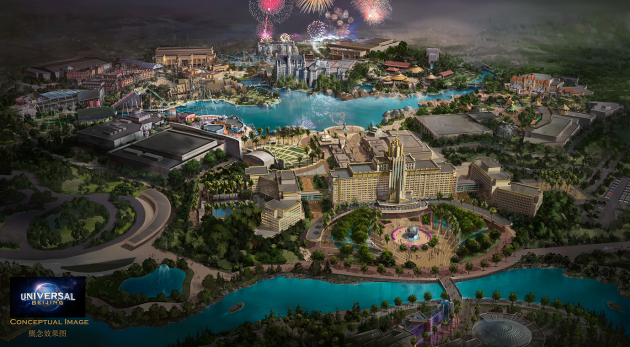 UPDATED 10/15 8:00 am PDT: Comcast press release has been added to the end of this report.

“The long-rumored park will be among the company’s largest and include the same kind of movie-themed attractions featured at Universal parks in Los Angeles, Orlando, Japan and Singapore. It will include attractions specifically created for China and plans also call for a Universal CityWalk retail-dining-and-entertainment complex as well as a ‘first-ever’ Universal-themed resort hotel.

“The park is to be located in an eastern suburb called Tongzhou. Additional phases could see the complex expand to 1,000 acres.

“The park will be jointly owned by Beijing Shouhuan, which is a consortium of four Chinese state-owned companies, and Universal Parks & Resorts.

“Universal Parks & Resorts, a division of NBC Universal, signed an agreement to develop the Beijing park in December of last year, the state-run Beijing News said, and the National Development and Reform Commission, which approves such projects, signed off on the plans last month.

“Tom Williams, chairman and chief executive of Universal Parks & Resorts, said the Beijing park would showcase some of the best themed attractions to be found anywhere. ‘We will work together [with Shouhuan] to create experiences based on China’s best-loved stories and centuries-long rich cultural heritage,’ he added.

“Asked specifically what ‘Chinese elements’ the park would include, Williams refused to offer specifics but said the company had already conducted ‘extensive research’ on this matter and said the park would ‘pay proper respect and homage to Beijing’ and Chinese culture overall.

” . . . Universal does not currently have direct investments in the Universal-branded parks in Japan and Singapore. But it will invest in two joint ventures being established to build and operate the Beijing park.

Development of a world-class Universal theme park in Beijing has been approved by the Chinese central government. The theme park will include all-new attractions designed especially for it as well as some of Universal’s most popular themed entertainment experiences from around the world.

The overall investment in the Universal Beijing theme park will be more than 20 billion RMB. It will be jointly owned by Beijing Shouhuan Cultural Tourism Investment Co., Ltd. (BSH Investment), a consortium of four state-owned companies, and Universal Parks & Resorts, a business unit of Comcast NBCUniversal.

The Universal Beijing theme park and support facilities will occupy a 120-hectare (approximately 300-acre) site located northwest of the intersection of the Beijing-Harbin Expressway and the East Sixth Ring Road in Tongzhou District, Beijing. The theme park will be accompanied by a Universal CityWalk entertainment complex featuring multiple retail, dining and entertainment opportunities, and a first-ever Universal-themed resort hotel, collectively forming the core components of the resort. Additional phases are planned, with the resort eventually encompassing 400 hectares (approximately 1,000 acres).

“Chinese people love the movies and exciting entertainment, and we are proud to introduce China’s first Universal theme park and CityWalk, as well as the first Universal-branded hotel anywhere in the world,” said Duan Qiang, Chairman of Beijing Tourism Group and BSH Investment.

“Universal Beijing will showcase blockbuster movie themes and present entertaining family shows that will highlight the very best of popular culture. It will be a tourism crown jewel, not only for Beijing but for all of China, bringing extraordinary entertainment experiences to the Chinese people and to our guests from around the world. In bringing Universal to China, we will also share the best of China with the world,” Duan added.

“Universal Beijing will create a higher level of economic growth, understanding and cultural exchange between our two countries. Together, we will create a unique experience that spotlights hugely popular Western entertainment concepts as well as China’s rich cultural legacy. This will be an opportunity to build relationships with the Chinese people on a direct and personal level,” said Tom Williams, Chairman and Chief Executive Officer of Universal Parks & Resorts.

“We are excited to be working with our partners at Beijing Tourism Group and at BSH Investment, under the leadership of Chairman Duan, and we are thankful for the strong support of the Chinese central and Beijing municipal governments,” Williams added.

Approved by the Beijing Municipal Government, Beijing Shouhuan Cultural Tourism Investment Company, Ltd. (BSH Investment) was founded for the purpose of supporting the Universal Beijing theme park and resort in its investment, development, operation and management. BSH Investment was established in November 2013 with an initial registered capital of 3.3 billion RMB.

Under the guideline to “drive the development of an industry and a region with a project,” BSH Investment and Universal Parks & Resorts will jointly invest, develop, construct and operate the Universal Beijing theme park with world-class design, technology, creativity and environmental protection. BSH Investment will use this project as a good opportunity to grow across various tourism industries, including resort hotels, retail, entertainment, exhibitions, sports and leisure, as well as the emerging industries of movie and TV production, performing arts and creative design. BSH Investment will build the top-notch Beijing International Tourism Resort with scientific planning and integrated development.

BSH Investment will make full use of the diversified brands, affluent capital, abundant resources and large networks of its shareholders and seize the opportunity of cooperating with Universal Parks & Resorts to build one of the best theme parks in the world and a renowned tourist destination in China and throughout the world. BSH Investment will make continuous effort to improve its competitiveness, innovation, operation and management capabilities and to grow its role in the cultural tourism industry. BSH Investment will also create competitive advantages in brand identity, management capability, intellectual property usage, and talent development. Based in Beijing and reaching out to the rest of China, BSH Investment is evolving into a top company in cultural tourism investment in China with distinct industry advantages and operational characteristics, excellent business performance, strong core competitiveness and sustainability through brand development and specialized management expertise.

Universal Parks & Resorts, a unit of Comcast NBCUniversal, offers guests around the globe today’s most relevant and popular entertainment experiences. With three-time Academy Award winner Steven Spielberg as creative consultant, its theme parks are known for creating immersive experiences for guests with some of the world’s most thrilling and technologically advanced film- and television-based attractions. Comcast NBCUniversal is a global media and technology company that owns and operates a valuable portfolio of news, sports and entertainment networks; Universal Pictures, a premier motion picture company; significant television production operations; a leading television stations group; and world- renowned theme parks.

Joe Kleimanhttp://wwww.themedreality.com
Raised in San Diego on theme parks, zoos, and IMAX films, InPark's Senior Correspondent Joe Kleiman would expand his childhood loves into two decades as a projectionist and theater director within the giant screen industry. In addition to his work in commercial and museum operations, Joe has volunteered his time to animal husbandry at leading facilities in California and Texas and has played a leading management role for a number of performing arts companies. Joe previously served as News Editor and has remained a contributing author to InPark Magazine since 2011. HIs writing has also appeared in Sound & Communications, LF Examiner, Jim Hill Media, The Planetarian, Behind the Thrills, and MiceChat His blog, ThemedReality.com takes an unconventional look at the attractions industry. Follow on twitter @ThemesRenewed Joe lives in Sacramento, California with his wife, dog, and a ghost.
Share
Facebook
Twitter
Linkedin
Email
Print
WhatsApp
Pinterest
ReddIt
Tumblr
Previous articleParques Reunidos Adds Two to Movie Park Portfolio With Dubai Contract
Next articleICONPATH celebrates 7th anniversary with new website