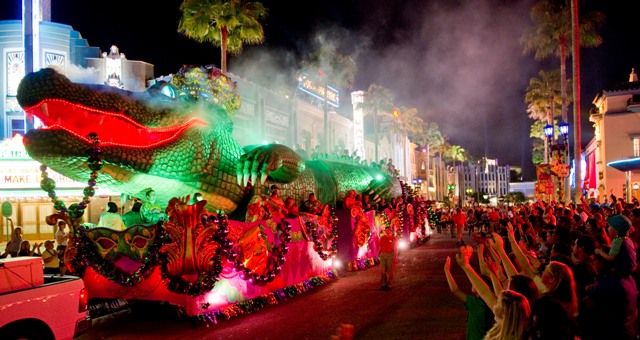 Orlando, FL, USA (Jan. 7, 2013) /PRNewswire/ — Universal Orlando Resort’s Mardi Gras 2013 is combining a stellar lineup of high-energy performances featuring some of the most sought-after names in music with the exciting spirit of the famed “N’awlins” celebration.

This year’s talent lineup features an incredible variety of music, ranging from Americana rock to soulful R&B to upbeat pop to Latin rhythms. Guests can return night after night to hear their favorite performers, including internationally-renowned rapper Pitbull – whose number-one single, “Give Me Everything,” was named “Top Radio Song” in the 2012 Billboard Music Awards; 2012 People’s Choice Award-winner Demi Lovato for “Favorite Pop Artist;” season 11 winner of “American Idol,” Phillip Phillips whose hit song, “Home,” was certified double-platinum; chart-topping country duo Montgomery Gentry , with top hits like “If You Ever Stop Loving Me” and “Back When I Knew It All;” teen heartthrob Austin Mahone ; and alternative rock band Matchbox Twenty, whose latest studio album, “North,” debuted at number one on the Billboard Hot 100. For the complete line-up, see below.

Before enjoying the live concerts, guests can dance along with dozens of energetic street performers and collect beads by the handful as the Mardi Gras parade winds through Universal Studios.  This year’s parade celebrates “Colorful Cultures Around the World,” featuring all-new float additions inspired by the Mexican Day of the Dead, Chinese New Year and Elegance of India. The parade’s elaborate, hand-crafted floats are built by Blaine Kern Artists – the same company that designs floats for the Mardi Gras parade in New Orleans.

The celebration continues at Universal Orlando’s very own French Quarter Courtyard. Partygoers can enjoy the soulful sounds of authentic New Orleans bands that travel straight from The Big Easy to perform Blues, Jazz and Zydeco music. And the irresistible smells of authentic Cajun cuisine will fill the French Quarter as guests taste an array of delicious New Orleans fare, including jambalaya, gumbo, beignets and more.

The excitement of Universal Orlando’s Mardi Gras is included with admission to Universal Studios. For more information, visit www.universalorlando.com/mardigras.

About Universal Orlando Resort
There are many ways to enjoy your Orlando vacation, but there is only one place where vacation becomes adventure:  Universal Orlando Resort. It is a unique destination featuring two theme parks, three magnificently themed on-site hotels and a nighttime entertainment complex. It’s the only Orlandodestination where you are not just entertained – you become part of the most exhilarating entertainment ever created. You can soar above Hogwarts with Harry Potter, swing above the streets with Spider-Man, be transformed into a banana-loving minion in the hilarious and heartwarming Despicable Me Minion Mayhem ride and help Shrek save Princess Fiona in Shrek 4-D.

Joe Kleimanhttp://www.themedreality.com
Raised in San Diego on theme parks, zoos, and IMAX films, Joe Kleiman would expand his childhood loves into two decades as a projectionist and theater director within the giant screen industry. In addition to his work in commercial and museum operations, Joe has volunteered his time to animal husbandry at leading facilities in California and Texas and has played a leading management role for a number of performing arts companies. Joe has been News Editor and contributing author to InPark Magazine since 2011. HIs writing has also appeared in Sound & Communications, LF Examiner, Jim Hill Media, and MiceChat. His blog, ThemedReality.com takes an unconventional look at the attractions industry. Follow on twitter @themedreality Joe lives in Sacramento, California with his fiancé, two dogs, and a ghost.
Share
Facebook
Twitter
Linkedin
Email
Print
WhatsApp
Pinterest
ReddIt
Tumblr
Previous articleinfinite diversity: Jeremy Railton and EDC
Next articleIssue #45 Editor’s Comments