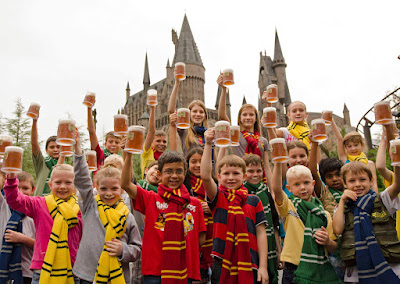 One thousand guests were given complimentary Butterbeers to mark the moment, with many of them sporting “Butterbeer mustaches.”

Since first being served to guests in The Wizarding World of Harry Potter in June 2010, Butterbeer has become one of the most anticipated and popular guest experiences at Universal Orlando Resort. Since the grand opening, Universal has added a fourth Butterbeer serving location within The Wizarding World of Harry Potter to accommodate the high demand by guests.

Butterbeer appears as a favorite drink in the Harry Potter books and films, and Universal’s creative and culinary teams set out to create the beverage as yet another authentic experience within The Wizarding World of Harry Potter.

The recipe for the non-alcoholic drink is a closely held secret – but the taste is reminiscent of shortbread and butterscotch and the beverage is served cold or frozen.

“We created an authentic taste experience for our guests to complement all of the other immersive experiences The Wizarding World of Harry Potter would offer them,” said Ric Florell, senior vice president of resort revenue operations and the executive who oversaw the development of Butterbeer. “We knew we had created something that tasted great and would be popular – but we have been surprised by just how popular.”

Universal Orlando Resort
There are many ways to enjoy your Orlando vacation, but there is only one place where vacation becomes adventure: Universal Orlando Resort. It is a unique destination featuring two theme parks, three magnificently themed on-site hotels and a nighttime entertainment complex. It’s the only Orlandodestination where you are not just entertained – you become part of the most exhilarating entertainment ever created. You can soar above Hogwarts with Harry Potter, swing above the streets with Spider-Man, be transformed into a banana-loving minion in the hilarious and heartwarming Despicable Me Minion Mayhem ride and help Shrek save Princess Fiona in Shrek 4-D.

About Harry Potter
Harry Potter continues to be a global phenomenon. Each of the seven books by author J.K. Rowling has broken sales records, with the series to date having sold approximately 450 million copies worldwide and translated into more than 70 languages. The Harry Potter films, produced by Warner Bros. Pictures, have grossed more than $7.7 billion to date worldwide at the box office, making Harry Potter the largest-grossing film franchise in history.

Joe Kleimanhttp://wwww.themedreality.com
Raised in San Diego on theme parks, zoos, and IMAX films, InPark's Senior Correspondent Joe Kleiman would expand his childhood loves into two decades as a projectionist and theater director within the giant screen industry. In addition to his work in commercial and museum operations, Joe has volunteered his time to animal husbandry at leading facilities in California and Texas and has played a leading management role for a number of performing arts companies. Joe previously served as News Editor and has remained a contributing author to InPark Magazine since 2011. HIs writing has also appeared in Sound & Communications, LF Examiner, Jim Hill Media, The Planetarian, Behind the Thrills, and MiceChat His blog, ThemedReality.com takes an unconventional look at the attractions industry. Follow on twitter @ThemesRenewed Joe lives in Sacramento, California with his wife, dog, and a ghost.
Share
Facebook
Twitter
Linkedin
Email
Print
WhatsApp
Pinterest
ReddIt
Tumblr
Previous articleImagineer Roger Broggie Jr. Passes Away
Next articleResources For Helping Children Cope with Tragedy