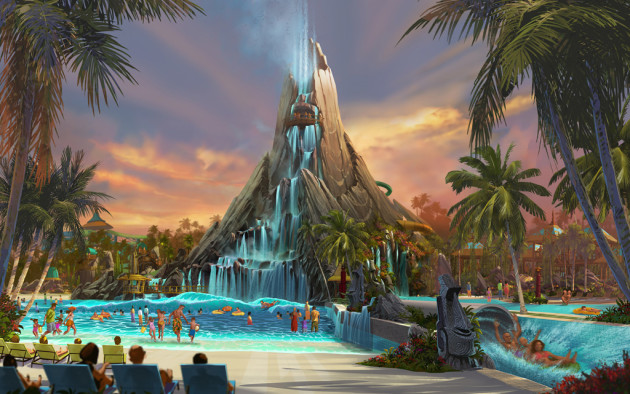 Universal’s Volcano Bay will be a place for the entire family. It will be a whole new generation of experience that reimagines what it means to be a water park.

Imagine a place that offers radically innovative, thrilling attractions, peaceful moments of relaxation and an inspired guest experience that will forever change the perception of water theme parks. It will be set in a highly themed, completely immersive environment inspired by postcard-perfect tropical islands. And it will be the kind of special place that only the Universal team – the same team that has changed the face of Universal Orlando Resort in recent years – can envision and create.

Universal’s Volcano Bay will be located within Universal Orlando Resort, just south of the Cabana Bay Beach Resort. Work is already underway and more details will be released in the future.

Universal’s Volcano Bay is the next in a series of boldly creative experiences that have opened and will continue to open at Universal Orlando. It began with The Wizarding World of Harry Potter – Hogsmeade in 2010 and quickly moved to Despicable Me Minion Mayhem, Springfield, hometown to America’s favorite animated family, The Simpsons, The Wizarding World of Harry Potter – Diagon Alley, eight new venues at Universal CityWalk, the breathtaking Cabana Bay Beach Resort and more. It will include Skull Island: Reign of Kong and Loews Sapphire Falls Resort in 2016.

Joe Kleimanhttp://wwww.themedreality.com
Raised in San Diego on theme parks, zoos, and IMAX films, InPark's Senior Correspondent Joe Kleiman would expand his childhood loves into two decades as a projectionist and theater director within the giant screen industry. In addition to his work in commercial and museum operations, Joe has volunteered his time to animal husbandry at leading facilities in California and Texas and has played a leading management role for a number of performing arts companies. Joe previously served as News Editor and has remained a contributing author to InPark Magazine since 2011. HIs writing has also appeared in Sound & Communications, LF Examiner, Jim Hill Media, The Planetarian, Behind the Thrills, and MiceChat His blog, ThemedReality.com takes an unconventional look at the attractions industry. Follow on twitter @ThemesRenewed Joe lives in Sacramento, California with his wife, dog, and a ghost.
Share
Facebook
Twitter
Linkedin
Email
Print
WhatsApp
Pinterest
ReddIt
Tumblr
Previous articleOne System to Run it All
Next articleAsia Parks Snapshot