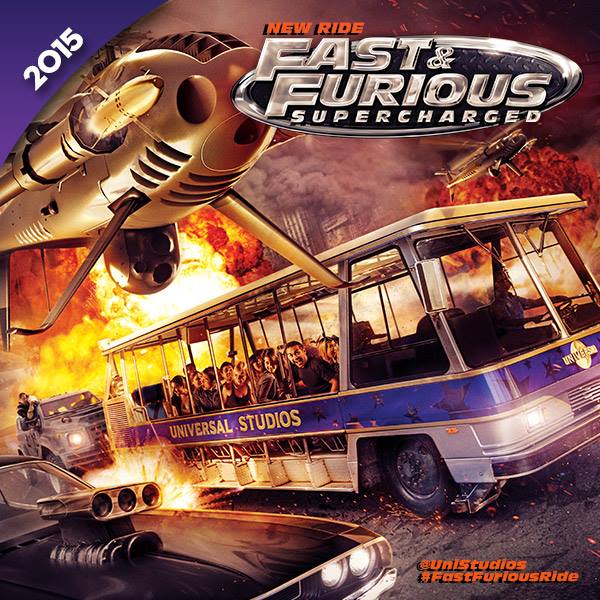 Universal City, CA, USA (April 9, 2014) — With its newest additions, Despicable Me: Minion Mayhem and Super Silly Funland launching this weekend and construction continuing on the Wizarding World of Harry Potter, Universal Studios Hollywood is using a combination of social media and The New York Times to tease a new attraction for 2015, centered around the park’s famous Studio Tram tour.  Brooks Barnes reports for the Times:

“The park, which will soon celebrate its 50th anniversary, said that it would also expand its Simpsons ride to include an entire themed village, scheduled to open next year.

“Also coming next year, the company said on Tuesday, will be Fast & Furious — Supercharged, a hybrid movie and thrill ride in which occupants of Universal’s famed back-lot trams will be encircled by 400-foot-long movie screens. ‘We’re going to make it feel like those trams are being pulled through the streets at speeds of over 100 miles per hour,’ said Chick Russell, an executive producer for Universal Creative.”

Universal City, CA, USA (April 9, 2014) — Reaffirming its position as the #1 tourist destination in Los Angeles with one of the most progressive and exciting theme park experiences anywhere, Universal Studios Hollywood is making an unprecedented five-year investment in revolutionary new thrill rides and expansive themed environments that will radically alter the familiar footprint and landscape of The Entertainment Capital of L.A.

This monumental transformation, the most significant undertaking in the theme park’s storied 50 year history, will have substantial impacts across all facets of L.A.’s economic spectrum from job creation to tourism. Representing the single largest investment ever made, this sweeping makeover began in 2012 with the introduction of the award-winning mega-attraction, “Transformers: The Ride—3D” and will culminate in 2016 with the much-anticipated Los Angeles debut of “The Wizarding World of Harry Potter.”

From its humble beginnings 50 years ago, Universal Studios Hollywood has remained true to its roots of immersing guests in the awe-inspiring world of movie-making magic, providing remarkable access to movie sets on a real working studio lot. Its once celebrated “Glamour Trams” have evolved to become the now world-famous Studio Tour and a hallmark attraction, bringing millions of guests onto areas of an authentic movie and television studio typically restricted to authorized movie production personnel and into that elusive world motivated by three compelling words: lights, camera, action.

The evolution of breakthrough, next-generation thrill rides has continued to revolutionize the theme park renowned for its innovative collaborations with top Hollywood filmmakers and the greatest creative minds in entertainment – Steven Spielberg, Peter Jackson, Michael Bay, Chris Meledandri – whose credibility contribute immensely to a ride’s authenticity.

Working in collaboration with Universal Creative, the visionary design and development division of Universal Parks & Resorts, Universal Studios Hollywood has crafted an ambitious blueprint for the future of the theme park detailing its expansive redesign and mega-attraction introductions.

“Transformers: The Ride—3D” set the stage for this epic transformation in 2012 and raised the bar for immersive, technologically advanced entertainment offered at Universal Studios Hollywood or elsewhere. Working in partnership with award-winning filmmaker Michael Bay and the technical luminaries at Industrial Light & Magic, the ride infused an adrenalized multi-level ride-track and visceral special effects with one of the most elaborate flight simulation ride systems ever created. Housed within a newly built 60,000 square foot structure, the ride utilized the highest, most sophisticated resolution of 3D-HD technology available to virtually launch guests into the dynamic, action-packed robotic world of the Transformers.

In summer 2013, the interior focal point of the theme park profoundly changed with the installation of Universal Plaza, a visually aesthetic 37,000 square foot art deco styled piazza. This impressive and versatile polygon-shaped entertainment venue sits at the heart of the theme park as a welcoming open air courtyard, architecturally reminiscent of classic Hollywood glamour. Featuring a soaring 70 foot tall tower emblazoned with the word Universal, the venue is large in scope, yet provides a warm and inviting environment to host an array of special events and entertainment.

On April 12, 2014, “Despicable Me Minion Mayhem” and “Super Silly Fun Land” will open at Universal Studios Hollywood. Based on Universal Pictures and Illumination Entertainment’s Academy Award® and Golden Globe Award-nominated film franchise, and created in collaboration with Chris Meledandri, founder and CEO of Illumination Entertainment, “Despicable Me Minion Mayhem” will resonate with the same endearing qualities and characters that catapulted the franchise to international blockbuster fame.

The footprint for “Despicable Me Minion Mayhem” and “Super Silly Fun Land,” however, will serve as a crucial turning point for the theme park, as the adventure represents its first foray into fully expansive themed environments aimed at immersing visitors from the moment they enter the space. From experiencing Gru’s neighborhood to Miss Hattie’s Home for Girls and the imaginative seaside carnival, this all-encompassing approach is a decisive departure from the park’s more commonly used vignette ride exteriors to create holistic experiences and transport guests to that imaginary place.

2015 will be a momentous year for the theme park with two spectacular attractions debuting as part of the 50th anniversary. “Springfield” an immersive land surrounding “The Simpsons Ride” will open in Spring 2015 and in Summer 2015, “Fast & Furious—Supercharged,” based on the blockbuster film series, will be introduced as the grand finale to the celebrated Studio Tour.

The former layout of the park will become unrecognizable when “Springfield” hometown of America’s favorite family, The Simpsons, breathes new life to the sprawling and vibrant space surrounding “The Simpsons Ride.” “Springfield” will capture the spirit of the town and engage visitors and fans of the show in the intensely absorbing and colorful world made famous throughout the series’ 25 seasons.

“Springfield” is being designed to make guests feel as if they are being propelled through their television sets into the accurately depicted city, complete with signature eateries from Krusty Burger to Luigi’s Pizza and Phineas Q. Butterfat’s 5600 Flavors Ice Cream Parlor to iconic watering holes like Moe’s Tavern and Duff’s Brewery.

“Fast & Furious—Supercharged” will be a pulse-pounding, adrenaline-fueled finale to the world-famous Studio Tour. This technologically advanced thrill ride, will catapult guests into the high-stakes underground world of fast cars where they’ll join the cast in a harrowing escapade. The ride will be situated within a newly constructed 50,000 square foot building on the legendary backlot and will reunite stars from the Fast & Furious series in a groundbreaking mega-attraction, conceived as a new installment to the dynamic film series that can only be experienced at The Entertainment Capital of L.A.

2016 will be a magical year for Universal Studios Hollywood as the theme park’s epic transformation becomes fully realized with the highly-anticipated arrival of “The Wizarding World of Harry Potter.”

Inspired by the magical world created by J.K. Rowling and brought to life in the Warner Bros. films, “The Wizarding World of Harry Potter” at Universal Studios Hollywood will be a fully immersive land designed for the entire family that brings the Harry Potter fiction and films to life with impeccable detail and authenticity. Similar to the dynamic Universal Orlando Resort themed land that opened in 2010, the Hollywood experience will be faithful to the visual landscape of the fiction and films, including Hogwarts castle that will serve as the iconic focal point of the impressively themed environment. “The Wizarding World of Harry Potter” is a collaboration between J.K. Rowling, Warner Bros. Entertainment and Universal Parks and Resorts.

This evolution of Universal Studios Hollywood will also include the addition of two newly constructed parking structures that, combined, will accommodate thousands of additional vehicles. Construction on the second parking structure will be completed in late 2015.

Joe Kleimanhttp://wwww.themedreality.com
Raised in San Diego on theme parks, zoos, and IMAX films, Joe Kleiman would expand his childhood loves into two decades as a projectionist and theater director within the giant screen industry. In addition to his work in commercial and museum operations, Joe has volunteered his time to animal husbandry at leading facilities in California and Texas and has played a leading management role for a number of performing arts companies. Joe has been News Editor and contributing author to InPark Magazine since 2011. HIs writing has also appeared in Sound & Communications, LF Examiner, Jim Hill Media, and MiceChat. His blog, ThemedReality.com takes an unconventional look at the attractions industry. Follow on twitter @ThemesRenewed Joe lives in Sacramento, California with his fiancé, two dogs, and a ghost.
Share
Facebook
Twitter
Linkedin
Email
Print
WhatsApp
Pinterest
ReddIt
Tumblr
Previous articleKings Dominion Turns Back the Clock For 40 Years of Family Fun
Next articleNickelodeon Characters to Populate New Themed Area at Sunway Lagoon