US Takes Initial Steps to Participate in Astana EXPO 2017 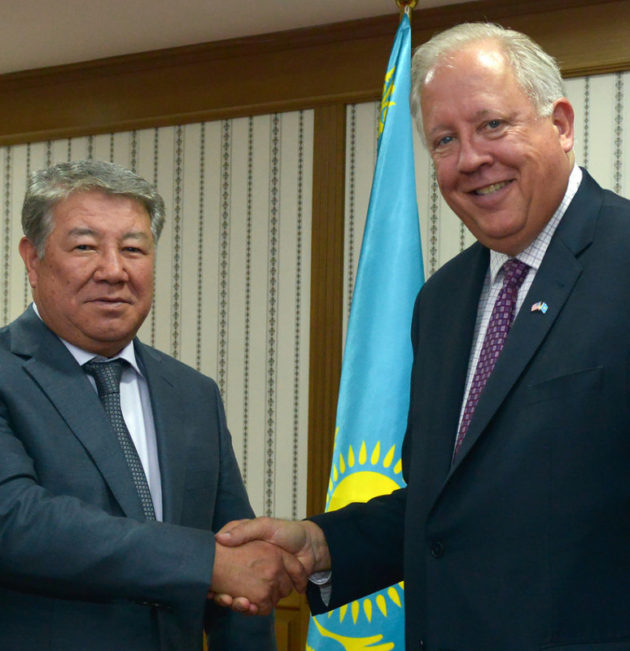 Astana, Kazakhstan (October 27, 2016) — Thomas Alfred Shannon, the United States Under Secretary of State for Political Affairs, has confirmed the country’s intent to participate in the international specialized exhibition EXPO 2017 Future Energy to be held in Astana during a visit by the U.S. delegation.

“I arrived in Astana last night. This is my first official visit, and I think our message is clear: we will participate in EXPO 2017. I have just had a chance to see the pavilion intended for the US – an excellent building and great pavilion,” said Thomas Alfred Shannon during his meeting with Akhmetzhan Yessimov, the Chairman of the Board of the National Company Astana EXPO 2017.

The Under Secretary of State noted that EXPO 2017 is an important element of building relations with Kazakhstan. According to him, the exhibition provides the Republic with an excellent opportunity to present itself as a global player, including in the energy sphere.

In his turn, Akhmetzhan Yessimov stressed the importance of the American participation in the exhibition. “I have visited the US twice this year. I know how much work is being done in terms of renewable sources of energy. The US is the leader in fostering new technologies and state-of-the-art scientific developments,” he said.

At the end of the meeting, the Under Secretary of State said they would promptly settle all procedural matters related to the country’s participation in EXPO 2017.

The Exhibition Organizer’s office also hosted a meeting between Akhmetzhan Yessimov and William Courtney, the President of the US-Kazakhstan Business Association.

Akhmetzhan Yessimov briefed on the work carried out on the preparation for EXPO and said that beginning October 31, the international participants will start receiving pavilions and apartments for the members of their delegations. Later on, work will start on filling the content of the pavilions.

“In April, I was in Washington within the delegation of the President of Kazakhstan, and there we had a meeting with the business community of the United States, who expressed interest for participating in our Exhibition. Among the EXPO 2017 partners and sponsors, we have large companies such as Cisco, General Electric, Chevron and others. I invite the US-Kazakhstan Business Association to participate in the EXPO too,” said Akhmetzhan Yessimov.

“We will be happy to cooperate with you. Our pavilion will consist of private companies that are members of our Association. We believe that this will be a very interesting and unique opportunity for the US businessmen, and we are looking forward to the Exhibition with the theme “the Future Energy,” said William Courtney.

During the meeting, there was a presentation of the large American clean power company AES, which expressed its willingness to contribute to the development of the EXPO 2017.

Joe Kleimanhttp://wwww.themedreality.com
Raised in San Diego on theme parks, zoos, and IMAX films, Joe Kleiman would expand his childhood loves into two decades as a projectionist and theater director within the giant screen industry. In addition to his work in commercial and museum operations, Joe has volunteered his time to animal husbandry at leading facilities in California and Texas and has played a leading management role for a number of performing arts companies. Joe has been News Editor and contributing author to InPark Magazine since 2011. HIs writing has also appeared in Sound & Communications, LF Examiner, Jim Hill Media, and MiceChat. His blog, ThemedReality.com takes an unconventional look at the attractions industry. Follow on twitter @ThemesRenewed Joe lives in Sacramento, California with his fiancé, two dogs, and a ghost.
Share
Facebook
Twitter
Linkedin
Email
Print
WhatsApp
Pinterest
ReddIt
Tumblr
Previous articleGuy Harvey to Share Conservation Work and Meet Guests at SeaWorld Orlando
Next articleJBA Consulting Engineers Acquired by NV5 Global