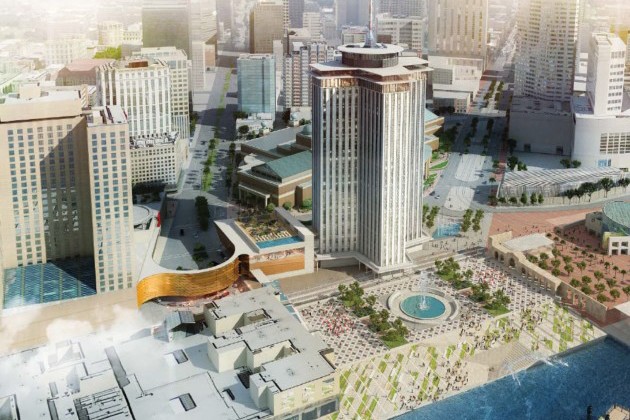 New Orleans, LA, USA (March 10, 2015) — US Thrill Rides announced today that it executed a development agreement with Two Canal Street Investors Inc, currently a finalist in the RFP process to re-development the iconic World Trade Center building at the foot of Canal Street in New Orleans. The Company stated that in the event that Two Canal Street Investors is selected by the New Orleans Building Corporation to re-develop the WTC building the two entities will join together to build the largest observation attraction in the Southern Gulf Region. Two Canal Street Investors’ five-star plans for redeveloping the legendary Edward Durell Stone signature skyline structure include construction
of the Tricentennial Tower for a dramatic and memorable family entertainment experience.

The proposed 320-foot-tall structure planned for the New Orleans downtown riverfront area, to
be named the New Orleans Tricentennial Tower, will feature a tower-twisting double-helix
gondola viewing experience as well as a sky-high restaurant and observation deck. The intended
height and downtown Riverfront location at the foot of Canal Street will provide breathtaking 2
360-degree views of the city’s French Quarter, Commercial Business District, Mississippi River
and greater New Orleans area. The Tower will be ADA compliant and built to withstand
Category 5 hurricane wind velocity. Perez, APC of New Orleans, Angela O’Byrne and Pio
Lyons are the local architects of record. 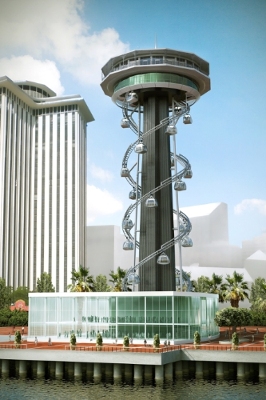 The New Orleans Tricentennial Tower would be designed to create an iconic experience for
visitors, much like the Seattle’s Space Needle or England’s London Eye, both of which have
been highly successful tourist-destination attractions for decades.

“The Seattle Space Needle hosts well over one million visitors per year,” said Michael Kitchen,
president of US Thrill Rides. “US Thrill Rides, Two Canal Street Investors and our additional
investor partners believe that a New Orleans’s Tricentennial Tower on the Riverfront would
quickly become one of the city’s most popular visitor attractions.”

Kitchen says the Aquarium of the Americas, situated next to the World Trade Center Building
and the proposed site for the Tower, already draws in excess of 1.5 million annual visitors. He
predicts that his Tower could help the City of New Orleans reach its overall goal of 15 million
annual visitors.

In addition to the gondola experience and the restaurant level, the group also plans a multimillion
dollar “New Orleans 360 Interactive Experience, in association with the “Louisiana
Maritime Museum,” to be located on a 300-foot high observation-deck level. Visitors will be
presented with a cutting edge, virtual reality tour experience that guides them through the history
of New Orleans.

“The concept would create a very high quality, 360 degree panoramic viewing experience, a
thoroughly immersive journey through New Orleans’ history from the city’s 1718 founding
through its 300th birthday celebration in 2018,” explained Kitchen.

US Thrill Rides, with its 25-year history of creating highly successful and iconic attractions for
theme parks and tourist destinations around the world, is very bullish about the success of the
New Orleans location. “We are enormously excited about bringing this anticipated project to the
community,” says Michael Kitchen. “New Orleans is a city that we have long set our sights on
for a tower attraction.”

Kitchen says that the Tricentennial Tower has been on the drawing board for quite some time,
and is now one step closer to becoming a reality for the City of New Orleans. Most importantly,
he looks forward to meeting with Councilmembers LaToya Cantrell and Nadine Ramsey, as well
as the other members of the City Council, Mayor Landrieu and his Economic Development team,
and the appropriate authorities at the Regional Transit Authority and the Port of New Orleans.
Kitchen believes that the observation attraction will further bolster redevelopment in the area,
drive more tourist visitors to the Mississippi Riverfront and ultimately create community jobs
and tax dollars.

The development team will complete the Tower construction in time for a grand opening during
the City of New Orleans Tricentennial celebration festivities scheduled for 2018. 3

US Thrill Rides is based in Orlando, Florida and is one of the world’s leading attraction
design/build companies, with extensive experience in developing and manufacturing amusement
attractions around the globe

Joe Kleimanhttp://wwww.themedreality.com
Raised in San Diego on theme parks, zoos, and IMAX films, InPark's Senior Correspondent Joe Kleiman would expand his childhood loves into two decades as a projectionist and theater director within the giant screen industry. In addition to his work in commercial and museum operations, Joe has volunteered his time to animal husbandry at leading facilities in California and Texas and has played a leading management role for a number of performing arts companies. Joe previously served as News Editor and has remained a contributing author to InPark Magazine since 2011. HIs writing has also appeared in Sound & Communications, LF Examiner, Jim Hill Media, The Planetarian, Behind the Thrills, and MiceChat His blog, ThemedReality.com takes an unconventional look at the attractions industry. Follow on twitter @ThemesRenewed Joe lives in Sacramento, California with his wife, dog, and a ghost.
Share
Facebook
Twitter
Linkedin
Email
Print
WhatsApp
Pinterest
ReddIt
Tumblr
Previous articleNew Exhibit at WonderLab to Link Science with Literacy
Next articleSheikh Mohammed Announces “Museum of the Future” for Dubai