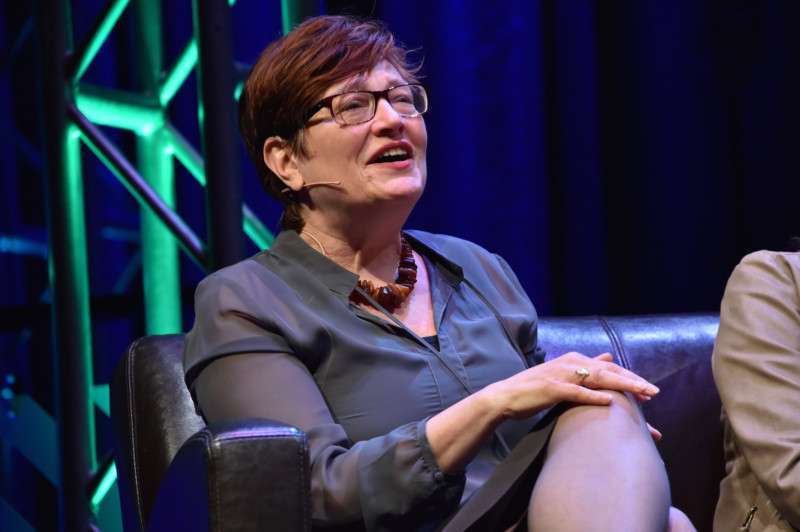 The United States Institute for Theatre Technology (USITT) has announced that Wendall K. Harrington, the “godmother of modern projection design” and head of the MFA program in Projection Design at the Yale School of Drama, will be delivering the keynote speech at the USITT 2018 Conference & Stage Expo.

Harrington’s career has embraced diverse disciplines including theatre, publishing and multi-image/video design, and production. She is well known for her work in Projection design and has been the recipient of numerous theatrical awards, including the Drama Desk Award, the Outer Critics Circle Award, the American Theatre Wing Award, the TCI Award for Technical Achievement, the Obie Award for Sustained Excellence of Projections, and was a USITT Distinguished Achievement Award winner in 2015.

Harrington is stepping in for Joseph Haj, artistic director of the Guthrie Theater in Minneapolis, who was previously scheduled to deliver the keynote address at the 2018 USITT Conference. As the Guthrie continues to focus attention internally on issues specific to workplace culture, Haj remains deeply committed to and engaged in internal dialogue and actions, and his schedule has changed in support of that ongoing priority.

The United States Institute for Theatre Technology (USITT), is a national non-profit association for the live entertainment production industry. It provides hands-on learning, mentorship, and networking opportunities for emerging and working professionals in the backstage arts. Its Annual Conference and Stage Expo is the only complete production event in North America, featuring over 250 training sessions and 280 exhibitors of the latest tools and resources for creating live entertainment. More information is available at usitt.org.

Joe Kleimanhttp://wwww.themedreality.com
Raised in San Diego on theme parks, zoos, and IMAX films, InPark's Senior Correspondent Joe Kleiman would expand his childhood loves into two decades as a projectionist and theater director within the giant screen industry. In addition to his work in commercial and museum operations, Joe has volunteered his time to animal husbandry at leading facilities in California and Texas and has played a leading management role for a number of performing arts companies. Joe previously served as News Editor and has remained a contributing author to InPark Magazine since 2011. HIs writing has also appeared in Sound & Communications, LF Examiner, Jim Hill Media, The Planetarian, Behind the Thrills, and MiceChat His blog, ThemedReality.com takes an unconventional look at the attractions industry. Follow on twitter @ThemesRenewed Joe lives in Sacramento, California with his wife, dog, and a ghost.
Share
Facebook
Twitter
Linkedin
Email
Print
WhatsApp
Pinterest
ReddIt
Tumblr
Previous articleWarner Bros World Abu Dhabi Guests Set to Fly Over the Rooftops of Gotham with Batman
Next articleDisney Investing Two Billion Euro in Expansion of Disneyland Paris Resort