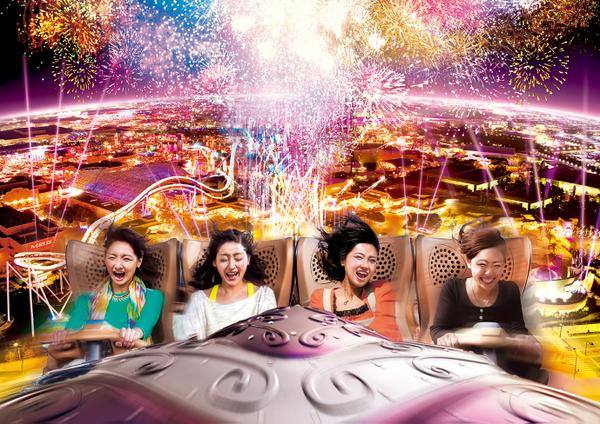 “Glenn Gumpel, CEO of the company behind Universal Studios Japan (USJ), the US movie theme park in Osaka, held a press conference in Osaka City on March 18. Gumpel announced plans to build a theme park in Okinawa. Gumpel described the scale of the development; ‘although it will be smaller than Tokyo Disney Land or USJ Osaka, it will still be big.’ Gumpel did not mention any specific information on location or opening time. However, people involved indicate the company is looking into the possible use of state-owned land around the Ocean Expo Park in Motobu. The plan will also consider the area around the Neo Park Okinawa in Nago City, which has been previously targeted.

“Gumpel said, ‘This park will not be featuring movies or TV shows. It will be something to fit into Okinawa.’ Regarding the development plan of the new park, Gumpel further stated, ‘We want to grow our business outside of Osaka as well.’  According to those involved, the new facilities will take advantage of the nature of Okinawa.

“However, they also said the plan is still in its initial phase and it is not guaranteed whether the plan will be implemented or not. A spokesperson for the USJ further explained, ‘CEO Gumpel announced the development with a disclaimer that we have not guaranteed that the company will execute the plan or not.'”

Joe Kleimanhttp://wwww.themedreality.com
Raised in San Diego on theme parks, zoos, and IMAX films, InPark's Senior Correspondent Joe Kleiman would expand his childhood loves into two decades as a projectionist and theater director within the giant screen industry. In addition to his work in commercial and museum operations, Joe has volunteered his time to animal husbandry at leading facilities in California and Texas and has played a leading management role for a number of performing arts companies. Joe previously served as News Editor and has remained a contributing author to InPark Magazine since 2011. HIs writing has also appeared in Sound & Communications, LF Examiner, Jim Hill Media, The Planetarian, Behind the Thrills, and MiceChat His blog, ThemedReality.com takes an unconventional look at the attractions industry. Follow on twitter @ThemesRenewed Joe lives in Sacramento, California with his wife, dog, and a ghost.
Share
Facebook
Twitter
Linkedin
Email
Print
WhatsApp
Pinterest
ReddIt
Tumblr
Previous articleIssue 56: Museums 2015
Next articleSmithsonian Releases Statement on Donor Controversy