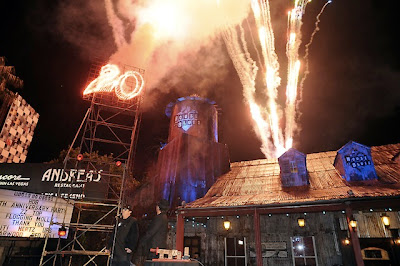 Studio City, CA, USA — Utopia Entertainment created a spectacle on Tuesday December 4, 2012 at the House of Blues on the Sunset Strip for their 20th Anniversary Celebration. Utopia produced a pre-show for the event that included a grand entrance for the Blues Brothers, Elwood and Zeke Blues, played in character by Dan Aykroyd and Jim Belushi. The event was to commemorate 20 years of being an iconic live music venue and included performances by the Blues Brothers, Deer Tick, Flogging Molly, and Rock and Roll hall of famers and legendary rock band ZZ Top.

Utopia Entertainment sent Elwood and Zeke Blues in their classic “Blues Mobile” down Sunset Boulevard with a full police motorcade and news helicopter to help guide them. The Brothers were on a “mission from God” to flip the switch that would kick off the evening’s festivities. Once they arrived at the venue, the duo took the stage and after Aykroyd spoke a few words, Belushi pulled the switch and a pyrotechnic

spectacular began including a ten-foot-tall “20” that was set ablaze raised 40 feet above street level and 20 comets that exploded off of the iconic water tower, one for each year the venue has been in business. This was the largest 90-second fireworks display ever seen on the Sunset Strip. As the pyrotechnics ended, a huge boom sounded and streamers filled the front of the venue. This prompted the beginning of a night of music,  food, and celebration.

“We were thrilled to be invited back to the House of Blues to continue to create spectacular elements for them. Having been a Blues Brothers fan since their first appearance back in the ‘70s, this was truly an honor and a great deal of fun,” said Norm Kahn, Utopia Entertainment CEO.

Joe Kleimanhttp://wwww.themedreality.com
Raised in San Diego on theme parks, zoos, and IMAX films, InPark's Senior Correspondent Joe Kleiman would expand his childhood loves into two decades as a projectionist and theater director within the giant screen industry. In addition to his work in commercial and museum operations, Joe has volunteered his time to animal husbandry at leading facilities in California and Texas and has played a leading management role for a number of performing arts companies. Joe previously served as News Editor and has remained a contributing author to InPark Magazine since 2011. HIs writing has also appeared in Sound & Communications, LF Examiner, Jim Hill Media, The Planetarian, Behind the Thrills, and MiceChat His blog, ThemedReality.com takes an unconventional look at the attractions industry. Follow on twitter @ThemesRenewed Joe lives in Sacramento, California with his wife, dog, and a ghost.
Share
Facebook
Twitter
Linkedin
Email
Print
WhatsApp
Pinterest
ReddIt
Tumblr
Previous articleGSCA Announces 2013 Officers and Committee Chairs
Next articleMoscow City Government Approves Construction of Universal Studios Moscow