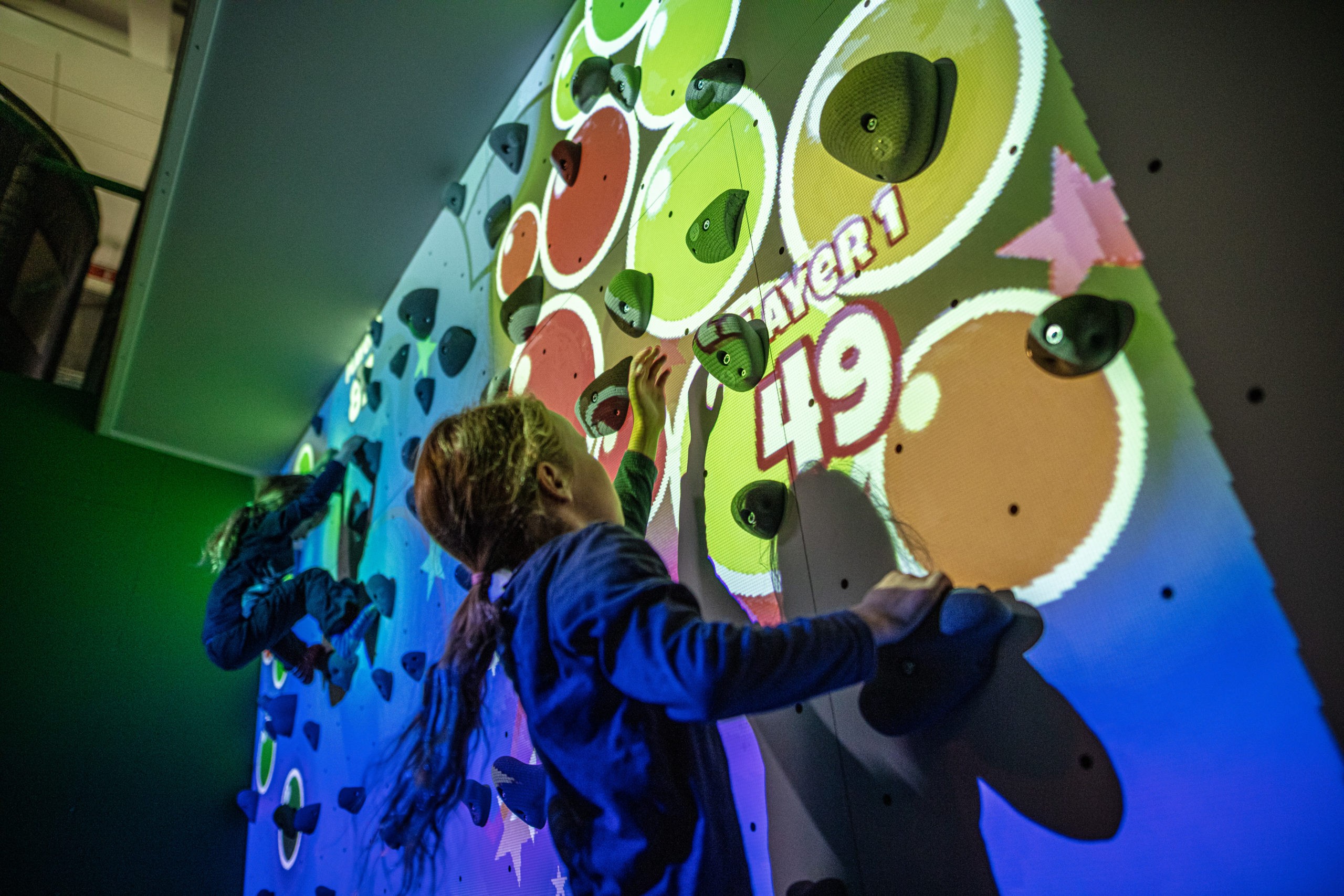 Finnish company Valo Motion has introduced a brand new augmented reality based climbing game. Hullaballoon is a group game and can be played anywhere between 1 to 4 people. The game world is projected around the climbers by using Valo Motion’s award winning augmented climbing wall – ValoClimb®. The game is about having fun, climbing and popping more balloons than the other players before the time runs out. The game also includes a special birthday mode, where a customizable birthday greeting pops up at the end of the game to surprise everybody.

“Since birthday parties are a big part of our customers’ business, we wanted to make sure that our customers can offer memorable and unique experiences to their visitors. The birthday mode is a short festive and party-themed version of the normal game mode, which our customers can enable for special occasions, ” says Antti Sandberg, the lead developer of the game.

Valo Motion game developers wanted to make something the players could start playing and enjoying instantly without having to read instructions or spend time figuring out how the game works. In fact, the game utilizes new technology that allows more precise tracking of player’s movement and poses. This improvement to Valo Motion’s proprietary body tracking software (ValoVision) makes the game easier to play. This also means that the game recognizes each player and keeps score of their individual points as well as the group points.

Another important goal was to keep the game simple, fun and exciting round after round. This is one of the reasons why the game developers included special balloons that give the players exceptional abilities. These special balloons vary from game to game, making each round unique and surprising.

Much like all the various games on the ValoClimb game platform, Hullaballoon focuses on accessibility, simplicity, and creating joyful interactions. While the game encourages players to practice climbing and rewards more active climbers, the game is also designed to be enjoyable for beginners. For example, the game is designed so that the tempo adapts in real-time to how the player is playing. Also, the players can customize the size of the game area, making it smaller or larger depending on the player’s needs.

Finally, the game has been designed so that there is no need to unnecessarily limit the number of simultaneous players. Valo Motion recommends anywhere between 1 to 4 people. However, smaller kids should have adult supervision when climbing.

When playing in groups, the players can join and leave the game at any point. Players can compete with each other for who pops the most balloons, or work together to beat the highscores. This way more climbers can enjoy the game at the same time since the waiting time is significantly reduced. At the end of each game, the players can share their gameplay video and highscores online and on social media directly from the touchscreen that comes with each ValoClimb unit. This tool was added to ValoClimb in order to give the location owners the opportunity to gain additional visibility for their location.

Joe Kleimanhttp://wwww.themedreality.com
Raised in San Diego on theme parks, zoos, and IMAX films, InPark's Senior Correspondent Joe Kleiman would expand his childhood loves into two decades as a projectionist and theater director within the giant screen industry. In addition to his work in commercial and museum operations, Joe has volunteered his time to animal husbandry at leading facilities in California and Texas and has played a leading management role for a number of performing arts companies. Joe previously served as News Editor and has remained a contributing author to InPark Magazine since 2011. HIs writing has also appeared in Sound & Communications, LF Examiner, Jim Hill Media, The Planetarian, Behind the Thrills, and MiceChat His blog, ThemedReality.com takes an unconventional look at the attractions industry. Follow on twitter @ThemesRenewed Joe lives in Sacramento, California with his wife, dog, and a ghost.
Share
Facebook
Twitter
Linkedin
Email
Print
WhatsApp
Pinterest
ReddIt
Tumblr
Previous articleChristie introduces the Griffyn all-in-one 4K RGB pure laser projector
Next articlePanasonic announces new projection and media products for live events and entertainment