VIDEO: Behind the Scenes on the Hogwart’s Express and First Look at Universal’s Goblins 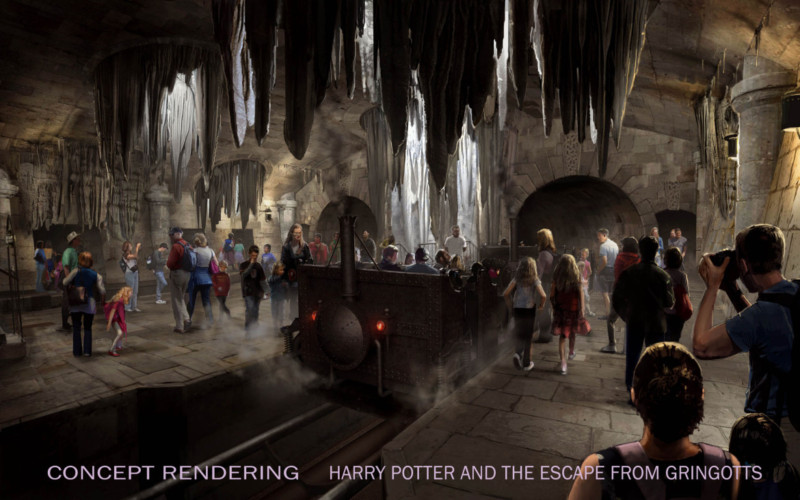 Orlando, FL, USA — After arriving at King’s Cross Station at Universal Studios Florida aboard the Hogwarts Express, guests will pass through London and the iconic brick wall archway from the films into The Wizarding World of Harry Potter – Diagon Alley – a bustling, wizarding hub within a Muggle city.  There will be shops, dining experiences, and a new ride called Harry Potter and the Escape from Gringotts – a multi-sensory, multi-dimensional journey that will take theme park attractions to a new level,which will place riders in the middle of an incredible adventure as they navigate their way through the perils of the Gringotts vaults.

The Hogwarts Express will feature two different experiences whether you’re traveling from London to Hogsmeade or vice versa.

Here’s a first look at the goblins that will be featured in Harry Potter and the Escape from Gringotts — the groundbreaking marquee attraction that will be opening this summer in The Wizarding World of Harry Potter — Diagon Alley.

Joe Kleimanhttp://wwww.themedreality.com
Raised in San Diego on theme parks, zoos, and IMAX films, InPark's Senior Correspondent Joe Kleiman would expand his childhood loves into two decades as a projectionist and theater director within the giant screen industry. In addition to his work in commercial and museum operations, Joe has volunteered his time to animal husbandry at leading facilities in California and Texas and has played a leading management role for a number of performing arts companies. Joe previously served as News Editor and has remained a contributing author to InPark Magazine since 2011. HIs writing has also appeared in Sound & Communications, LF Examiner, Jim Hill Media, The Planetarian, Behind the Thrills, and MiceChat His blog, ThemedReality.com takes an unconventional look at the attractions industry. Follow on twitter @ThemesRenewed Joe lives in Sacramento, California with his wife, dog, and a ghost.
Share
Facebook
Twitter
Linkedin
Email
Print
WhatsApp
Pinterest
ReddIt
Tumblr
Previous articleSpongebob and Friends Spend Summer at Tusenfryd
Next articleChance Rides’ First SkyQuest Provides Unprecedented Aerial Viewing at Indianapolis Zoo