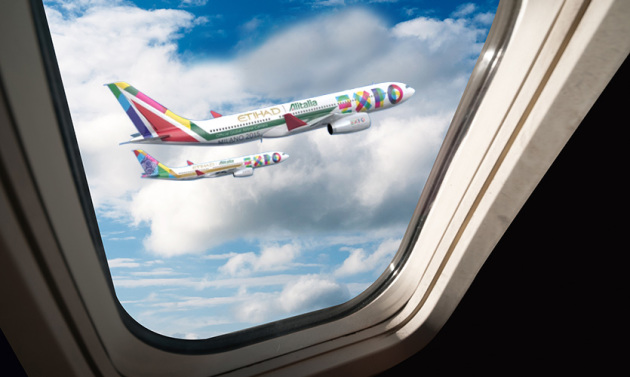 Milan, Italy (October 21, 2014) — Each Monday, the Expo Milano 2015 management flies a drone over the site to collect footage showcasing the rapid rate of construction.  Here is the latest, shot 10/20/14:

Expo Milano 2015 is taking to the skies in other ways as well.  Alitalia, the main Italian carrier, and Etihad Airways, the national airline of the United Arab Emirates, have unveiled two special aircraft  with the design of Expo Milano 2015, starting  their co-sponsorship of the global event.  Expo 2015, which will be held in Milan from May 1 to October 31, 2015 is expected to attract approximately 20 million visitors, a third of which will reach the city by plane. Alitalia and Etihad Airways organized two simultaneous events: one at the airport of Milan’s Malpensa and another one in Abu Dhabi, during which the two A330-200 were revealed to guests present and to the thousands of people from all over the world who followed the presentation online. 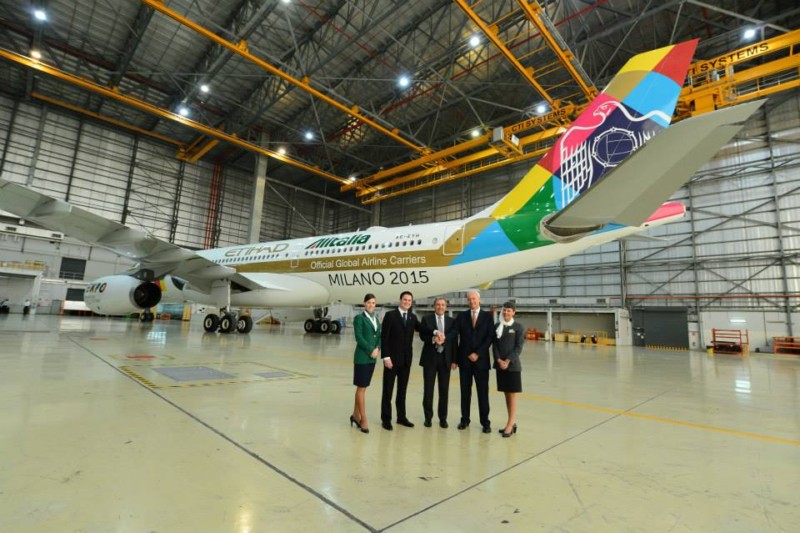 At Expo 2015, the presence of Alitalia and Etihad Airways will be relevant: in the west  zone of the Exhibition Site there will be a lounge with an interactive social hub that will allow guests to enjoy the activities available both in Milan and in the rest of the world.  Giuseppe Sala, Commissioner of the Government of Italy for Expo Milano 2015 and CEO of Expo 2015 S.p.A, said: “We are very pleased with the communication initiative of  Alitalia and Etihad that will accompany Expo Milano 2015 to its opening. The design of the Alitalia Airbus and the Etihad colored logo of the Universal Exposition emphasize the uniqueness and extraordinary event that we are organizing. Starting today we have, then, one more tool to tell the world what will happen in Italy from May 1 to October 31, 2015.  North and South America, Africa, Asia: the main destinations of this plane that coincide with the international tourist markets of greatest interest to us. We expect 12 million Italian visitors and around 8-9 million foreign visitors. Seven million of them will reach the Universal Exposition by plane. We are confident that, through this and the other initiatives that will be fielded in the coming months, the partnership with Alitalia-Etihad Airways will be a fundamental support to achieving this goal. ” 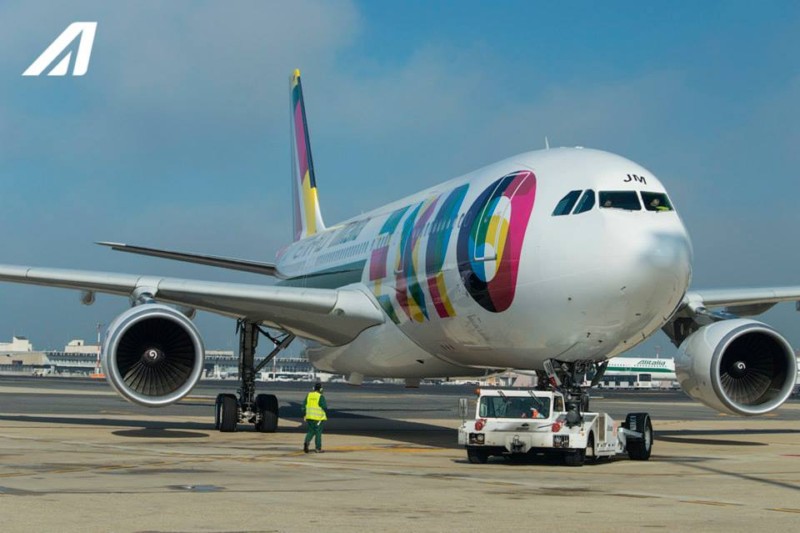 “This adventure has been started in the best way possible,” said Pietro Modiano, President of SEA “Malpensa airport is a hub and will soon be made more efficient. Alitalia and Etihad together are betting on the Italian airport system and this encourages us.”

The Alitalia A330-200 and the Etihad Airways A330-200, both with a special design, flew for the first time today, between Rome and Abu Dhabi. James Hogan, President and Chief Executive Officer of Etihad Airways, said: “I am honored to launch the collaboration with Alitalia for Expo 2015 in Milan and Abu Dhabi. For us, this partnership is a great investment opportunity in Italy. From today we bring into the world not only the message of Expo Milano 2015 but also its brand. “During Expo 2015, the frequency of flights to and from Milan will be increased thanks to the new daily flights to Milan Malpensa from Abu Dhabi and Shanghai that will be introduced in the coming months by Alitalia, after the approval of the European authorities, in addition to the increase in number of other domestic and international flights. These flights will connect to flights from Etihad Airways for the Middle East and for its markets in the  Indian Subcontinent, South East Asia and Africa.

Gabriele Del Torchio, CEO of Alitalia, said: “We are very happy to be here today in Milan to present with Etihad Airways our joint communication campaign for Expo 2015 and to unveil the new design that Alitalia has dedicated the Event of 2015. The logo of Expo embodies a set of values and a vision that are the same as Alitalia: the pursuit of excellence, style and elegance typical of Made in Italy, the renowned cuisine, fashion, design and the arts which are a fundamental part of our country and that we at Alitalia will strive to show the world by virtue of our role as Official Global Airline Carrier of the event. Our commitment to showcase the best of Italy in the world, while always keeping  a keen eye on sustainability, these are values and fundamental themes of Expo 2015:  it is for this reason that in painting the new Expo design on the Airbus A330 of Alitalia, we have adopted the most modern technical solutions and we used the best technology and the most environmentally friendly paints with the goal of environmental protection as an essential guide for  our actions.”

Joe Kleimanhttp://wwww.themedreality.com
Raised in San Diego on theme parks, zoos, and IMAX films, Joe Kleiman would expand his childhood loves into two decades as a projectionist and theater director within the giant screen industry. In addition to his work in commercial and museum operations, Joe has volunteered his time to animal husbandry at leading facilities in California and Texas and has played a leading management role for a number of performing arts companies. Joe has been News Editor and contributing author to InPark Magazine since 2011. HIs writing has also appeared in Sound & Communications, LF Examiner, Jim Hill Media, and MiceChat. His blog, ThemedReality.com takes an unconventional look at the attractions industry. Follow on twitter @ThemesRenewed Joe lives in Sacramento, California with his fiancé, two dogs, and a ghost.
Share
Facebook
Twitter
Linkedin
Email
Print
WhatsApp
Pinterest
ReddIt
Tumblr
Previous articleJackson Hole Wildlife Film Festival Announces Theme for 2015 – Elephants: Saving Ivory
Next articleMatt Dawson of Forrec discusses museum design in terms of Storytelling, Architecture, Technology and Experience

Qiddiya awards contract of US$1 billion evaluation to construct Six Flags location, the first outside of the North America