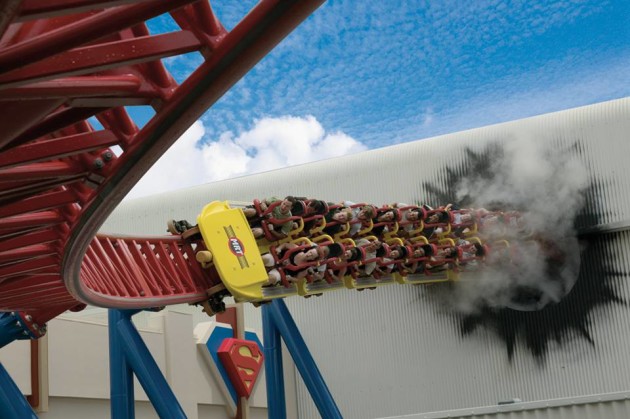 Sydney, Australia (March 23, 2015) — After more than two years of strategic planning and negotiations, Village Roadshow Limited (VRL) is pleased to announce that its wholly-owned subsidiary, Village Roadshow Holdings Pty Ltd, has signed an agreement to establish a funds management business with CITIC Trust Co. Ltd (CITIC). Funds raised will be for the purpose of investing in theme parks, entertainment facilities and related real estate development throughout Asia with a particular focus on China.

CITIC, a subsidiary of CITIC Group, a State Owned Enterprise, is one of China’s largest finance conglomerates and has a strong record in China in the development, establishment, management and fundraising of investment funds in which Chinese and international investors are able to participate.

The signing of this important agreement represents a major new business horizon for Village Roadshow. Entering into a long term funds management business with CITIC will be complementary to, and will leverage the advantages of, Village Roadshow’s unique theme park opportunities in the region.

CITIC and Village Roadshow will establish the first fund of approximately US$500 million, to be denominated in Renminbi, later in 2015, followed by the creation of multiple future funds over the ensuing years, as the extraordinary breadth of major theme park and associated commercial real estate opportunities come to fruition in Asia. The funds management company for this and future funds will be owned 51% by CITIC and 49% by a Village Roadshow subsidiary.

Village Roadshow along with CITIC will commit to invest up to 5% in the initial US$500 million fund. The initial commitment of up to US$25 million each will be contributed as projects advance over the next two to three years. As part of CITIC’s agreed role in this arrangement, it will be responsible for raising the balance of required investment into this fund. Village Roadshow expects to generate fees through its equity ownership in the fund manager, whilst Village Roadshow Theme Parks will benefit through a minimum 60% ownership of the management company responsible for design/construction/operating contracts for the theme parks initiated by the fund.

Since the signing of a strategic alliance and key term sheet between CITIC and Village Roadshow in early 2014, a number of exciting potential development opportunities have been identified including one in Chengdu, a CITIC initiated opportunity which not only has an established sizeable population and market, but is already a world famous tourist destination as the home of China’s much loved pandas. Other exciting opportunities include Southern China as well as Johor Bahru in Malaysia, and South Korea.

Village Roadshow’s Co-Executive Chairman and Co-CEO, Mr. Robert Kirby said “The signing of this joint venture between CITIC and Village Roadshow marks a major milestone in the progression of Village Roadshow’s strategic theme park expansion into China and South East Asia, and further solidifies our strong trusted partnership with CITIC. With this major building block in place we are in a position to progress our expansion plans with even greater certainty, control and confidence, aided by access to impressive development sites and the vast experience that CITIC brings to this partnership. We look forward to working closely with CITIC and are extremely excited about bringing our China and Asia Master Plan to reality”.

Village Roadshow’s Co-Executive Chairman and Co-CEO, Mr. Graham Burke said “Village Roadshow has expertise that is both unique and proven in designing, building, operating and promoting theme parks. These highly sought after skills combined with CITIC’s vast experience in property development and fundraising, places us extremely well for success in the execution of our growth strategy”.

Joe Kleimanhttp://wwww.themedreality.com
Raised in San Diego on theme parks, zoos, and IMAX films, InPark's Senior Correspondent Joe Kleiman would expand his childhood loves into two decades as a projectionist and theater director within the giant screen industry. In addition to his work in commercial and museum operations, Joe has volunteered his time to animal husbandry at leading facilities in California and Texas and has played a leading management role for a number of performing arts companies. Joe previously served as News Editor and has remained a contributing author to InPark Magazine since 2011. HIs writing has also appeared in Sound & Communications, LF Examiner, Jim Hill Media, The Planetarian, Behind the Thrills, and MiceChat His blog, ThemedReality.com takes an unconventional look at the attractions industry. Follow on twitter @ThemesRenewed Joe lives in Sacramento, California with his wife, dog, and a ghost.
Share
Facebook
Twitter
Linkedin
Email
Print
WhatsApp
Pinterest
ReddIt
Tumblr
Previous articleTES Partners with Britain’s Leading Museums and Institutions to Expand Art Education
Next articleTivoli Readies for 2015 Season With New Entertainment, Dining, and Gardens