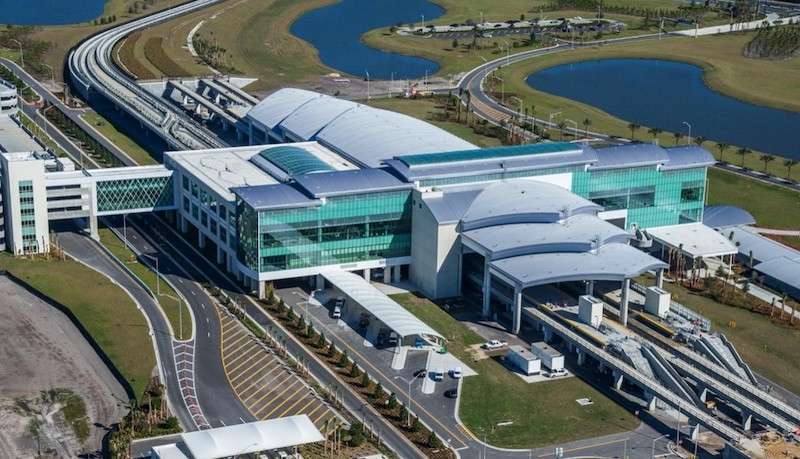 It has been 150 years since the ‘golden spike’ ceremony in 1869 that marked the joining of the Central Pacific Railroad from the West with the Union Pacific Railroad in the East and the completion of the United States’ first transcontinental, coast-to-coast railroad line. Today, Virgin Trains announced the introduction of the ‘red spike era’ and the company’s commitment to reinventing passenger rail service in America by providing fast, efficient, hospitality-driven transportation that connects dynamic, complementary cities and congested corridors that are too close to fly and too long to drive.

Virgin Trains is developing 170 miles of new track into the completed state-of-the-art intermodal facility located in the new South Terminal at the Orlando International Airport (MCO) as part of the company’s Phase 2 expansion into Central Florida. The massive infrastructure project has begun and encompasses four zones including the area of the Orlando International Airport and the Virgin Trains Maintenance Facility. This monumental endeavor, which will use 225 million pounds of American steel, will include the laying of 490,000 ties and transporting 2.35 million tons of granite and limestone by 20,000 railcars. Additionally, approximately two million spikes and bolts will be hammered and put in place over the next 36 months.

“This is a historic milestone on the path to reinvent passenger rail in America and clearly demonstrates the leadership role that the private sector can play in revitalizing our nation’s infrastructure,” said Virgin Trains Chairman and co-founder of Fortress Investment Group Wes Edens. “Virgin Trains service between Orlando and Miami will launch an American passenger rail renaissance. We expect that this will be the first of many passenger lines in the U.S. that follow this model for connecting city pairs that are too close to fly and too far to drive.”

Virgin Trains’ strategic expansion into Orlando, the nation’s most visited city, comes as travel to the Sunshine State is at an all-time high. Orlando International Airport welcomed a record-breaking 47 million passengers last year and according to Visit Florida, over 126 million out-of-state visitors traveled to Florida in 2018. With service to Orlando expected to begin in 2022, Virgin Trains projects over six million annual riders in Florida and $6.4 billion in direct economic impact to Florida. The project between South and Central Florida will generate more than 10,000 jobs and over $650 million in federal, state and local tax revenue over an eight year period.

“Officially launching construction to Orlando marks a huge milestone for Virgin Trains and the realization of our vision to reinvent passenger rail in America,” said Virgin Trains President Patrick Goddard. “Connecting Orlando and Miami, two of our nation’s greatest cities, will provide tremendous economic and environmental benefits that will be an asset to Florida for generations.”

Expansion between Orlando and South Florida represents a total private investment of $4 billion. In September 2018, Virgin Trains additionally announced that it will construct and operate a new service connecting Las Vegas and Southern California.

In November 2018, Brightline announced a strategic partnership and trademark licensing agreement with the Virgin Group, one of the world’s most recognizable brands in travel and hospitality. Executing a phased approach to the rebrand to Virgin Trains in 2019, in April the company unveiled Virgin MiamiCentral as the first element to feature
the new Virgin branding.

Joe Kleimanhttp://wwww.themedreality.com
Raised in San Diego on theme parks, zoos, and IMAX films, Joe Kleiman would expand his childhood loves into two decades as a projectionist and theater director within the giant screen industry. In addition to his work in commercial and museum operations, Joe has volunteered his time to animal husbandry at leading facilities in California and Texas and has played a leading management role for a number of performing arts companies. Joe has been News Editor and contributing author to InPark Magazine since 2011. HIs writing has also appeared in Sound & Communications, LF Examiner, Jim Hill Media, and MiceChat. His blog, ThemedReality.com takes an unconventional look at the attractions industry. Follow on twitter @ThemesRenewed Joe lives in Sacramento, California with his fiancé, two dogs, and a ghost.
Share
Facebook
Twitter
Linkedin
Email
Print
WhatsApp
Pinterest
ReddIt
Tumblr
Previous articleMeet Lionsgate Entertainment World’s new general manager: Selena Magill
Next articleNew AVIXA report predicts global professional AV industry will grow to $325 billion in five years