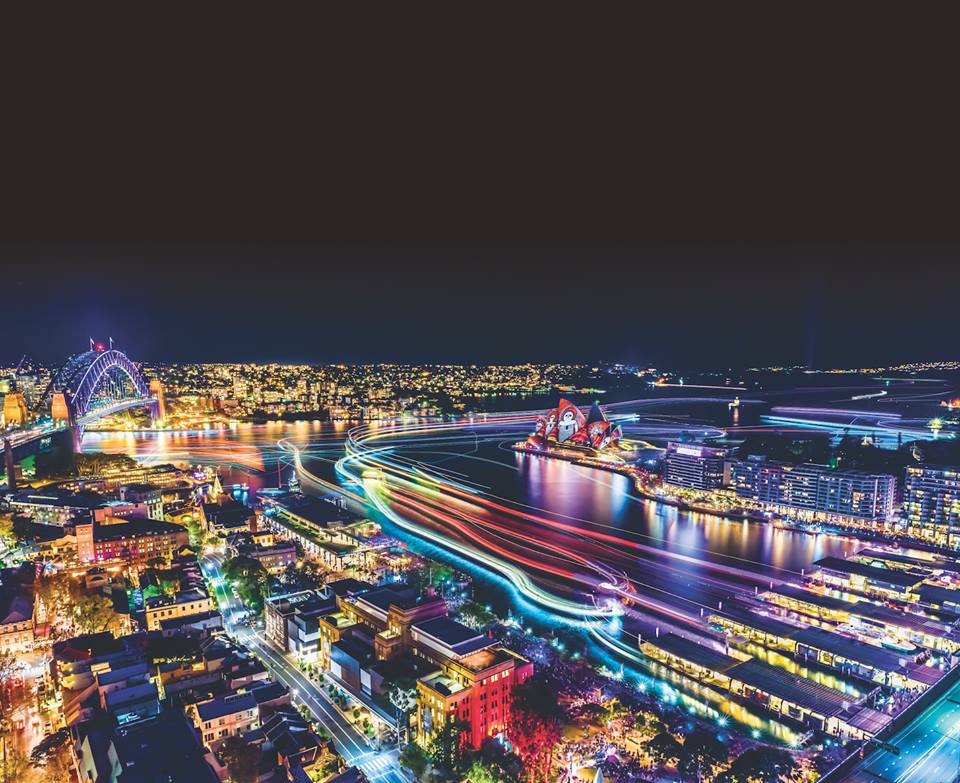 The world’s largest festival of light, music, and ideas, Vivid Sydney returns with its biggest edition yet in 2017, with a new precinct at Barangaroo, an expanded light walk through the Royal Botanic Garden Sydney, and imaginary creatures that will transform the Sails of the Sydney Opera House.

Over 23 nights from Friday May 26 to Saturday June 17, Vivid Light will transform the cityscape into a creative canvas, take over Sydney stages with Vivid Music’s biggest program to date, and provide a global forum for creative conversations at Vivid Ideas.  Once again, Technical Production Company will handle the event’s extensive projection mapping and interactive technologies.

For the first time, Vivid Sydney’s vibrant kaleidoscope will stream into a new precinct at Barangaroo, with a trail of installations winding through intimate laneways, past waterfront vistas and into a foodie paradise. Visitors will be immersed in A Day in the Light, an outdoor theater of light and sound that lets them become part of the artwork, and treated to optical illusions at Trapdoor, which tells the stories of Barangaroo’s past.

The festival’s bright lights will return to the Royal Botanic Garden Sydney with an expanded trail that will take visitors through the heart of the beautiful harborside oasis. Here, Birds of Lumos, inspired by the rare Rowi species of the New Zealand kiwi, will come to life as they glow and pulse with color. The nostalgic Dipping Birds, giant 2.5 meter illuminated sculptures, will change color as they dip back and forth into a pond, and quirky installation You lookin’ at me? will turn heads as big glaring eyes follow passers-by. A pop-up landmark celebrating Harbour City, Sydneyland, will provide a beautiful and iconic photo backdrop for visitors and locals.

At the heart of the Vivid Sydney light walk, the Sails of the World-Heritage listed Sydney Opera House will be bought to life by a series of imaginary creatures curated and designed by acclaimed cinematographer, editor, and graphic designer Ash Bolland. Audio Creatures will show creatures interacting with the environment, morphing and moving between each other across the iconic Sails.

The City’s icons will once again be transformed, including the facade of the Museum of Contemporary Art Australia with Organic Vibrations, a collaboration between Australian artist Julia Gorman and the Paris-based creative and artistic collective, Danny Rose. Interactive lighting display Dreamscape will let visitors put their own colourful mark on the city’s skyline from Circular Quay along the Cahill Expressway to the Sydney Harbour Bridge.

Destination NSW Chief Executive Officer and Executive Producer of Vivid Sydney, Sandra Chipchase said, “In 2016, a record-breaking 2.31 million visitors came to Vivid Sydney, which is testament to the festival’s impressive line-up, continued innovation and growth over the past nine years.

“Vivid Sydney in 2017 will impress with a robust program across Vivid Light, Music and Ideas, so now is the time for visitors to start planning their trip so they can be inspired visually, creatively and musically at Vivid Sydney.”

The buildings, shopping malls, streets and laneways of Chatswood CBD will be reinvented as a retro-futuristic smart city called Future City, Smart City with ingenious installations and light sculptures inspired by the ‘Steampunk’ design aesthetic of 19th century steam-powered machinery.

Lights for the Wild at Taronga Zoo, will return featuring giant animal light sculptures that wowed visitors when they made their debut last year. A few new characters and surprises will join the 2016 favorites, including a swarm of buzzing bees, and a giant interactive Port Jackson shark.

Martin Place will be home to Sydney’s most popular food and beverage purveyors, alongside grand, interactive light installations. Highlights include a new version of the multi-award winning 3D mapped projection Urban Tree 2.0, and Deep Forest, an urban jungle for feasting featuring an open flame fire-pit with barbecue treats from Porteno and some of NSW’s best fire chefs.

Twenty-eight  tonnes of water will be thrown into the air every minute, whilst lasers, flame jets, music and fireworks combine in a celebration of the power of creativity and innovation at Darling Harbour. Magicians of the Mist water theater will be a spectacular display of technology and art defining the digital era.

The beat of the Vivid Music program is stronger than ever with over 250 events in this year’s line-up. Highlights include an Australian exclusive performance by electronic pop duo Goldfrapp and the return of Curve Ball — a large-scale live music and art event created by Fuzzy Music, both at Carriageworks.

City Recital Hall breaks from its classical roots with an incredible program — Metamorphosis — serving up everything from jazz and dance anthems, to multi-sensory masterpieces. Sydney based indie rock band Dappled Cities will launch their new album IIIII (pronounced five), Grammy award-winning jazz singer Dianne Reeves will take to the stage in a special one off performance, and Paul Mac will host a Sound Bubble Sound Party.

In a Vivid Music first, Vivid Sydney has partnered with the City of Sydney to deliver a program across a multitude of city venues. Showcasing grassroots and emerging local music talent, highlights will include a new roof top festival from Cake Wines, Pie in the Sky, and a showcase of Women in Electronic Music at Oxford Art Factory.

Kings Cross returns with an exciting line-up of performance music, art, ‘Avant Cabaret’, and cutting-edge, independent and immersive theater with a bohemian flavor, part of the Vivid KX program.

The Vivid Ideas program will continue to challenge and inspire with more than 200 events exploring the changing face of the creative industries. Iconic American artist Shepard Fairey, who blurs the boundaries of art and design, headlines the Vivid Ideas line-up. His body of work includes his Barack Obama HOPE campaign, the OBEY GIANT art project, and this year’s ubiquitous ‘We The People’ initiative.

In a Vivid Sydney exclusive, Fairey will share his do-it-yourself approach, career highlights and how he managed to turn his creativity into an authentic voice about street culture. He will also create a large scale public mural live on a wall in Sydney’s CBD, and some of his most famous works to date will be part of a pop-up exhibition at the Darling Quarter.

Throughout the city, a series of conferences will connect start-ups, emerging talent, practitioners and entrepreneurs with world-class creators and thought-leaders. Highlights include The Sunrise, which connects start-ups with successful founders; Semi Permanent, returning with a series of interactive, immersive experiences featuring leaders from Getty Images, NIKE, Google and more; and family-favorite, Robowars, where some of the country’s best engineers and robotic experts put their self-built robots to battle.

Joe Kleimanhttp://wwww.themedreality.com
Raised in San Diego on theme parks, zoos, and IMAX films, Joe Kleiman would expand his childhood loves into two decades as a projectionist and theater director within the giant screen industry. In addition to his work in commercial and museum operations, Joe has volunteered his time to animal husbandry at leading facilities in California and Texas and has played a leading management role for a number of performing arts companies. Joe has been News Editor and contributing author to InPark Magazine since 2011. HIs writing has also appeared in Sound & Communications, LF Examiner, Jim Hill Media, and MiceChat. His blog, ThemedReality.com takes an unconventional look at the attractions industry. Follow on twitter @ThemesRenewed Joe lives in Sacramento, California with his fiancé, two dogs, and a ghost.
Share
Facebook
Twitter
Linkedin
Email
Print
WhatsApp
Pinterest
ReddIt
Tumblr
Previous articleKing Abdullah Economic City, Dubai Opera, IMG Worlds and more to discuss theme parks and attractions development in the Middle East
Next articleTop Industry Professionals Tour Southern California Attractions and Learn Best Practices During IAAPA Leadership Conference