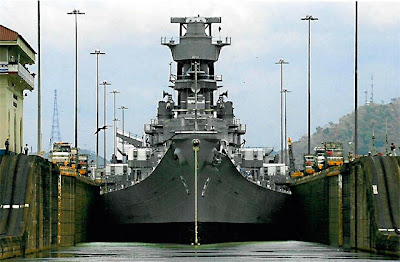 Los Angeles, CA, USA (June 18, 2012) /PRNewswire-USNewswire/ — The USS IOWA battleship made its final voyage to its new home in the Port of Los Angeles last week and Wargaming America has been hard at work creating virtual battle scenarios for future USS IOWA visitors to enjoy. The battleship is set to become a museum this July, and Wargaming is bringing its history to life by creating a bridge experience and an aerial combat game that will live on the ship and showcase its firepower and aerial defenders in action.

In the ship’s below-deck digital theater, Wargaming America will offer a virtual video experience from the bridge recreating the ship’s role in supporting the American landings at Okinawa, Japan, in 1945. Visitors will see the ship’s impressive turrets as its 16-inch guns rotate and fire at their targets.

In addition, Wargaming is developing a game room on board the ship that will put visitors in Grumman F6F Hellcat warplanes to defend the USS IOWA from attack by Japanese Zeros. There will be 15 stations to defend from.

The USS IOWA is the only ship in her class to serve in the Atlantic and Pacific oceans during World War II. She served through the Korean War and Cold War and was decommissioned in 1990. She’s known as the Battleship of Presidents because her many notable visitors include Franklin D. Roosevelt, Ronald Reagan and George H.W. Bush. The ship was officially donated by the U.S. Navy to the Pacific Battleship Center on September 6, 2011, and will open as an interactive naval museum in the Port of Los Angeles in San Pedro in July.

“The USS Iowa is such an important piece of U.S. Naval history and we’re extremely proud to be able to sponsor it,” said Jeremy Monroe, General Manager, Wargaming America. “One of our core tenets as a battle-focused gaming company is military history and preservation, so it means a lot to us to be able to provide a virtual view of the USS IOWA in its past glory for its many upcoming visitors.”

The USS IOWA departed from Terminal 3 at the Port of Richmond on Saturday, May 26th, and passed under the Golden Gate Bridge for the last time. This marked the beginning of a four-day tow to the Port ofLos Angeles, where the battleship underwent routine hull cleaning offshore before moving to the Outer Harbor. On June 9th, the historic ship traveled down the main channel to its permanent home at Berth 87 in the Port of Los Angeles in San Pedro, Calif. There, the ship will host a reunion of USS IOWA veteransJuly 2nd through the 6th, and then celebrate its public grand opening on July 7th.

Wargaming America, the North American publisher and service center of the award-winning global videogame developer and publisher, is committed to working with U.S. causes and organizations that preserve and educate on military history. In addition to its partnership with the USS IOWA, the company has worked with the Military Vehicle Technology Foundation in Portola, Calif., and The National WWII Museum in New Orleans, La., on military history and education initiatives.

About Pacific Battleship Center and USS IOWA
The Pacific Battleship Center, a nonprofit organization established in 2009, has been awarded ownership of the USS IOWA by the U.S. Navy for display as an interactive naval museum at Port of Los Angeles Berth 87. The IOWA, which served in World War II, the Korean War and the Cold War, is 14 stories high, 887 feet long and displaces more than 45,000 tons. The museum, opening to the public on July 7, 2012, highlights the contributions of this battleship and its crew at critical moments in American history.

About Wargaming.net
Wargaming.net® is an award-winning online game developer and publisher and one of the leaders in the free-to-play MMO market. Focused on creating free-to-play, global, team-based battles, the company is creating a wargaming universe its flagship armored World of Tanks, the flight combat World of Warplanes(one of the most anticipated MMOs for 2012), and the naval World of Battleships scheduled for release in 2013. For more information, please visit: www.wargaming.net

Joe Kleimanhttp://wwww.themedreality.com
Raised in San Diego on theme parks, zoos, and IMAX films, Joe Kleiman would expand his childhood loves into two decades as a projectionist and theater director within the giant screen industry. In addition to his work in commercial and museum operations, Joe has volunteered his time to animal husbandry at leading facilities in California and Texas and has played a leading management role for a number of performing arts companies. Joe has been News Editor and contributing author to InPark Magazine since 2011. HIs writing has also appeared in Sound & Communications, LF Examiner, Jim Hill Media, and MiceChat. His blog, ThemedReality.com takes an unconventional look at the attractions industry. Follow on twitter @ThemesRenewed Joe lives in Sacramento, California with his fiancé, two dogs, and a ghost.
Share
Facebook
Twitter
Linkedin
Email
Print
WhatsApp
Pinterest
ReddIt
Tumblr
Previous articleScience Museum of Virginia Awarded Telly Award for Question Power Campaign
Next articleHighest Elevation Roller Coaster in US Opens In Colorado