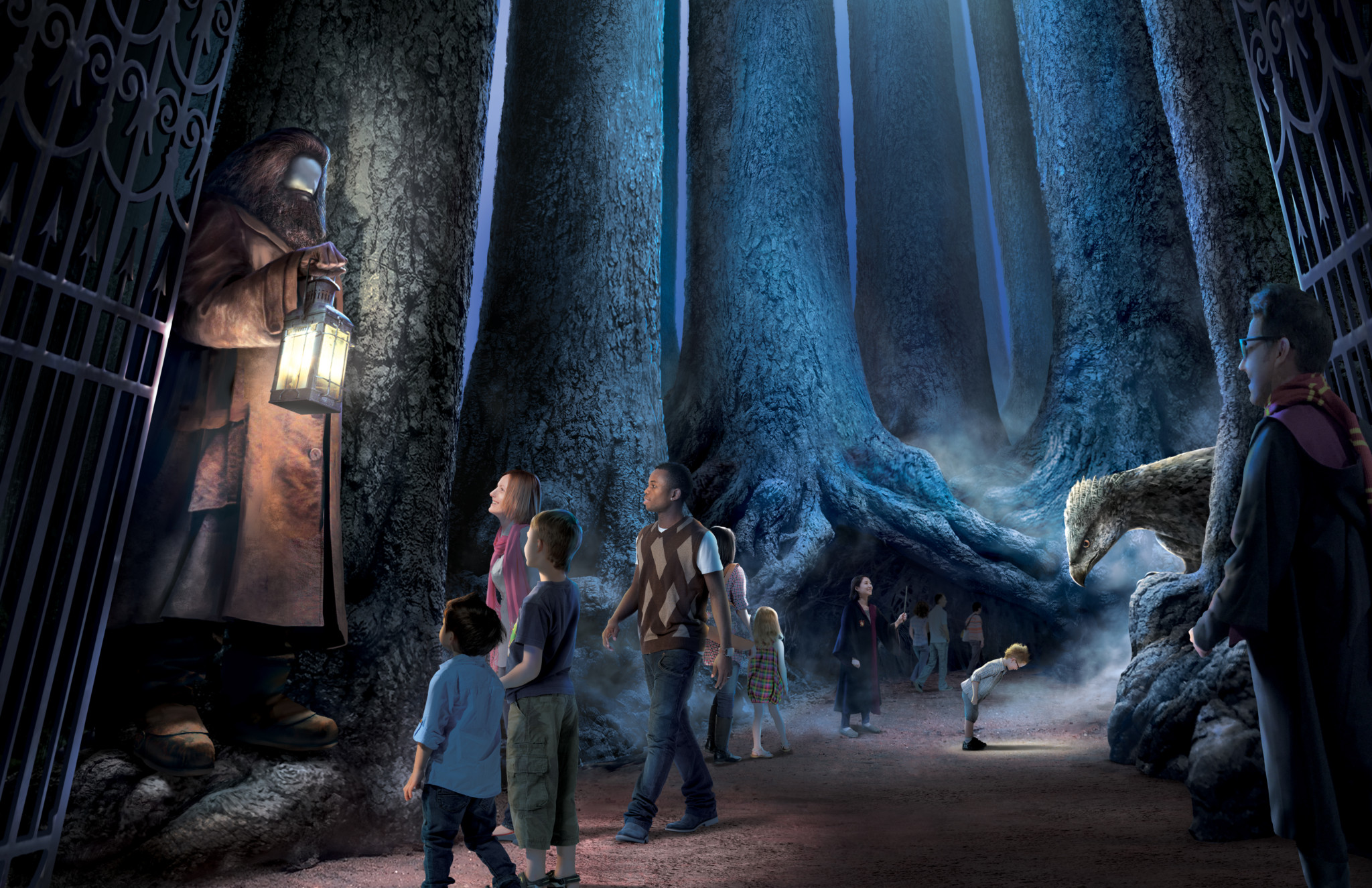 Warner Bros Studios Tour London has announced a permanent expansion on 31st March, we will unveil dedicated to the Forbidden Forest.

It may be strictly off-limits to Hogwarts students, but for the first time this March, guests are invited to defy Professor Dumbledore’s orders and follow the footsteps of Harry, Ron and Hermione deep into the grounds of the Forbidden Forest.

Home to an abundance of creatures, the Forbidden Forest offers shelter and protection to Hippogriffs and Acromantula among many others. It is also well known to beloved half-giant Hagrid in his role as Care of Magical Creatures professor. One of Rubeus Hagrid’s original costumes will be on display, lantern in hand, to welcome guests through the Hogwarts Gates deep into the forest. Filled with 19 trees each with a diameter of over 12 feet, guests will walk beneath the giant entwined roots on their journey and will even be able to control the weather using the same techniques created by filmmakers.

Among the imposing trees, guests will encounter a full size model of Buckbeak, which is new to the tour, and have the opportunity to bow to the majestic creature.  They will see up close the incredible detail and craftsmanship that went into creating the magnificent Hippogriff. Each feather had to be individually inserted and glued by the Creature Effects team who were busy adding feathers right up until the final moment Buckbeak was needed on set for Harry Potter and the Prisoner of Azkaban.

As guests venture deeper into the depths of the forest, you will come face-to-face with Aragog, the Acromantula. Emerging from his dark lair, the enormous spider will appear before you along with spiderlings from his family.  Created by Nick Dudman, Creature and Make-Up Effects Designer, with help from Production Designer Stuart Craig, Aragog had a leg span of over 18 feet and was even able to crawl out of a hole and deliver dialogue in Harry Potter and the Chamber of Secrets.

Joe Kleimanhttp://wwww.themedreality.com
Raised in San Diego on theme parks, zoos, and IMAX films, InPark's Senior Correspondent Joe Kleiman would expand his childhood loves into two decades as a projectionist and theater director within the giant screen industry. In addition to his work in commercial and museum operations, Joe has volunteered his time to animal husbandry at leading facilities in California and Texas and has played a leading management role for a number of performing arts companies. Joe previously served as News Editor and has remained a contributing author to InPark Magazine since 2011. HIs writing has also appeared in Sound & Communications, LF Examiner, Jim Hill Media, The Planetarian, Behind the Thrills, and MiceChat His blog, ThemedReality.com takes an unconventional look at the attractions industry. Follow on twitter @ThemesRenewed Joe lives in Sacramento, California with his wife, dog, and a ghost.
Share
Facebook
Twitter
Linkedin
Email
Print
WhatsApp
Pinterest
ReddIt
Tumblr
Previous articleThe Five Spot Puts a Biscuit in the Basket: InPark’s Joe Kleiman Talks Hockey and Fan Events with BaAM’s Gary Myers
Next articleE&S Installs 8K Full Dome Systems In Two Adler Theaters