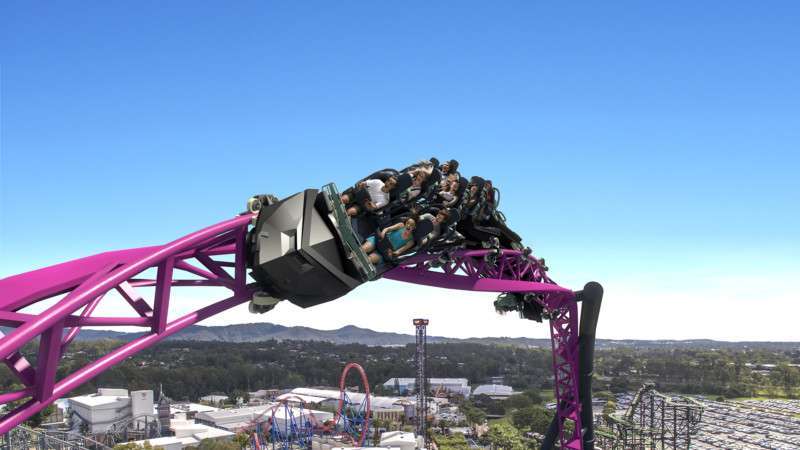 Warner Bros. Movie World has today announced the Southern Hemisphere’s biggest ever attraction will be coming to the iconic Gold Coast theme park this October.

DC Rivals HyperCoaster is a game-changer for Australian theme parks, and is the longesst, fastest and highest HyperCoaster in the Southern Hemisphere which is set to change the theme park’s landscape like nothing ever before.

Village Roadshow Theme Parks Chief Executive Officer, Clark Kirby said DC Rivals HyperCoaster will be a worldclass ride featuring an array of thrills guests can enjoy as a family and will be themed around the hugely popular DC Universe featuring some of the most epic battles and rivalries between iconic DC Super Heroes and Super-Villains.

“Reaching speeds of up to 115km/h, guests will be taken on an exhilarating journey as they experience 4.3G forces and a series of twists and turns along the 1.4km track, almost double the length of any other ride on the Gold Coast,” he said.

“The DC Rivals HyperCoaster will also feature a world-first train design giving selected riders the opportunity to ride backwards as they take on one of the world’s first non-inverted loops.

“Announcements such as these reinforce Movie World’s continued commitment to providing world-class experiences and cement the parks’ position as one of Australia’s premiere tourist destinations.”

Joe Kleimanhttp://wwww.themedreality.com
Raised in San Diego on theme parks, zoos, and IMAX films, InPark's Senior Correspondent Joe Kleiman would expand his childhood loves into two decades as a projectionist and theater director within the giant screen industry. In addition to his work in commercial and museum operations, Joe has volunteered his time to animal husbandry at leading facilities in California and Texas and has played a leading management role for a number of performing arts companies. Joe previously served as News Editor and has remained a contributing author to InPark Magazine since 2011. HIs writing has also appeared in Sound & Communications, LF Examiner, Jim Hill Media, The Planetarian, Behind the Thrills, and MiceChat His blog, ThemedReality.com takes an unconventional look at the attractions industry. Follow on twitter @ThemesRenewed Joe lives in Sacramento, California with his wife, dog, and a ghost.
Share
Facebook
Twitter
Linkedin
Email
Print
WhatsApp
Pinterest
ReddIt
Tumblr
Previous articleCall for Speakers for Immersed 2017 at Ontario Science Centre
Next articleDreamWorks Animation Attraction Headlines 2017/2018 Offerings at Universal Studios Hollywood