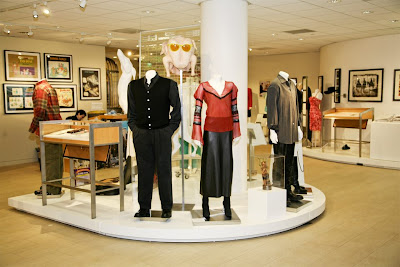 Burbank, CA, USA /PRWEB/ —  Warner Bros. Television Group is teaming with the Paley Center for Media to take TV out of the box, inviting all to peer inside with the new interactive, multimedia museum exhibit Television: Out of the Box at the Paley Center for Media’s Los Angeles location in Beverly Hills, California. Celebrating nearly 60 years of iconic programming, Television: Out of the Box will feature props, costumes, original animation art, patent filings and much more from over 60 series ranging from Alice to The West Wing. The exhibit will run for the next three years and will be refreshed from time to time as items become available for display.

With Television: Out of the Box, Paley visitors will get an inside look at the creation and execution of some of the most memorable and successful programs in the history of the medium, from the founding of Warner Bros. Television in 1955 and its earliest beginnings with series such as ABC’s Cheyenne, Maverick and 77 Sunset Strip to iconic programs from the 1970s and ’80s, such as CBS’s Dallas and The Waltons, and ABC’s legendary Roots. The exhibit — which features an accessible layout and interactive displays throughout — continues on with NBC’s Emmy® winners ER, The West Wing and Friends, CBS’s Murphy Brown and through to the present day with current series including CBS’s The Big Bang Theory and Two and a Half Men, TNT’s The Closer and The CW’s The Vampire Diaries, providing a behind-the-scenes look at some of the most memorable programming in the television industry. The exhibit will include props, sets from Friends and Seinfeld, clips, artifacts and interactive elements such as a walk-in animation cel where visitors can interact with their favorite animated characters.

This exhibit represents the first time a major studio has teamed with the Paley Center to provide an interactive experience for television viewers. The Paley Center for Media, founded in New York in 1975 and established in Beverly Hills in 1996, is home to one of the world’s foremost publically accessible media archives, housing over 150,000 programs spanning the history of television, radio and new media. Throughout the year, the center illuminates the holdings preserved within its archive by hosting exclusive panel conversations and Q&A sessions with the casts and creative teams behind both current and classic programs, including Glee and True Blood, and media icons ranging from Carol Burnett and Bob Newhart to Jimmy Fallon and George Lucas. These events continue the Paley Center’s mandate to lead the discussion about the cultural, creative and social significance of television, radio and emerging platforms for the professional community and media-interested public.

Visitors have the chance to see the alien head from V up close, Tony Soprano’s robe, and even Daisy Duke’s actual “Daisy Dukes.  With Television: Out of the Box, patrons can view these and other out-of-this-world costumes from series like Babylon 5 and Smallville, see classic Hanna-Barbera toys from the 1950s and ’60s, and read suggestions on the Roots script from author Alex Haley to producer Stan Margulies. Fans looking for a more interactive experience can have their photo taken in a “walk-in cel,” where they can be photographed with Bugs Bunny and Daffy Duck, or in front of a replica of the Central Perk set from Friends or an iconic Monk’s Diner booth from Seinfeld.

“Television has played an important role in American popular culture over the last six decades and Warner Bros. is an important part of TV’s history,” said Barry Meyer, Chairman & CEO, Warner Bros., who began his career at the Studio some 40 years ago in the television department. “I’m grateful to our partners at the Paley for providing the perfect environment for such an incredible exhibit. With all the memorable series represented here, everyone who loves television will be delighted, whether they’re already fans of these shows or discovering them for the first time.”

“Television: Out of the Box presents a major step for the Paley Center as it will bring a unique and unprecedented multimedia experience to the global community of media consumers,” said Pat Mitchell, president and CEO of the Paley Center for Media. “The exhibit demonstrates our mission to celebrate and preserve television’s best while also illustrating the importance of media in all of our lives. Warner Bros., as one of television’s most successful and prolific studios, is an ideal partner for us to collaborate with in this exciting new venture.”

Highlights of Television: Out of the Box include:

ABOUT THE PALEY CENTER FOR MEDIA
The Paley Center for Media, with locations in New York and Los Angeles, leads the discussion about the cultural, creative, and social significance of television, radio, and emerging platforms for the professional community and media-interested public. Drawing upon its curatorial expertise, an international collection and close relationships with the leaders of the media community, the Paley Center examines the intersections between media and society. The general public can access the collection and participate in programs that explore and celebrate the creativity, the innovations, the personalities and the leaders who are shaping media. Through the global programs of its Media Council and International Council, the Paley Center also serves as a neutral setting where media professionals can engage in discussion and debate about the evolving media landscape. Previously known as The Museum of Television & Radio, the Paley Center was founded in 1975 by William S. Paley, a pioneering innovator in the industry. www.paleycenter.org.

ABOUT WARNER BROS. TELEVISION GROUP
Warner Bros. Television Group (WBTVG) strategically manages all of Warner Bros.’ current and emerging television businesses, including worldwide and local production, traditional and digital distribution and broadcasting. As the industry’s leading supplier of television programming, WBTVG has longstanding relationships with the most respected names in television, including Chuck Lorre, John Wells, Jerry Bruckheimer, J.J. Abrams and others. For the 2011–12 season, WBTVG is producing more than 50 primetime, first-run, cable and animated series, including Two and a Half Men, The Big Bang Theory, The Mentalist, The Middle, Fringe, Supernatural, The Closer, Southland, Pretty Little Liars, The Ellen DeGeneres Show and The Looney Tunes Show, among many more, totaling over 2,000 episodes.

Joe Kleimanhttp://www.themedreality.com
Raised in San Diego on theme parks, zoos, and IMAX films, Joe Kleiman would expand his childhood loves into two decades as a projectionist and theater director within the giant screen industry. In addition to his work in commercial and museum operations, Joe has volunteered his time to animal husbandry at leading facilities in California and Texas and has played a leading management role for a number of performing arts companies. Joe has been News Editor and contributing author to InPark Magazine since 2011. HIs writing has also appeared in Sound & Communications, LF Examiner, Jim Hill Media, and MiceChat. His blog, ThemedReality.com takes an unconventional look at the attractions industry. Follow on twitter @themedreality Joe lives in Sacramento, California with his fiancé, two dogs, and a ghost.
Share
Facebook
Twitter
Linkedin
Email
Print
WhatsApp
Pinterest
ReddIt
Tumblr
Previous articleGirlguides Inducted Into Guiness Book of World Records as 8,500 Dance In Synch at Blackpool Pleasure Beach
Next articleNew Admission Plan at National Aquarium Makes Animals More Accessible