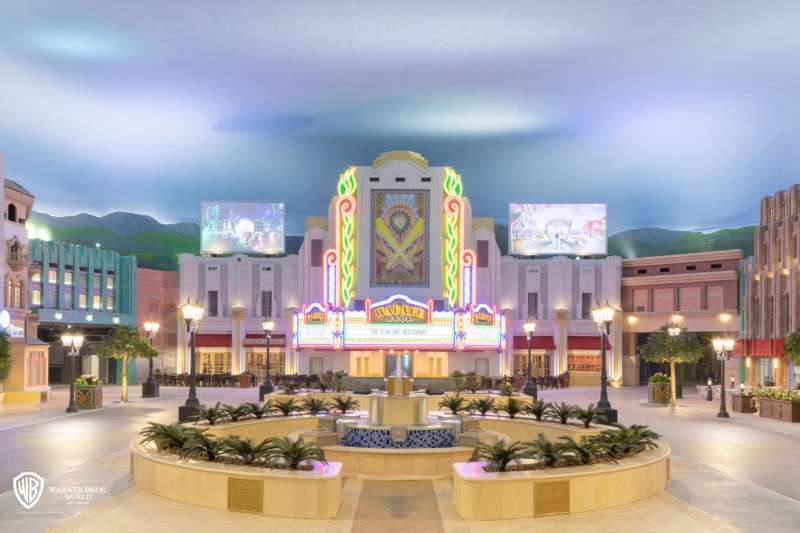 Miral has announced that Warner Bros. World™ Abu Dhabi, an indoor theme park, will open its doors to the public on July 25 2018. When the highly-anticipated Warner Bros. World Abu Dhabi opens this Summer, it will feature six immersive lands including DC’s Metropolis and Gotham City, as well as Cartoon Junction, Bedrock, Dynamite Gulch and Warner Bros. Plaza. Tickets available now at www.wbworld.com.

“The launch of Warner Bros. World Abu Dhabi is yet another milestone in the Emirate’s journey to further enrich its tourism offering, and help establish it as one of the world’s leading tourist destinations. The park is another great addition to Yas Island’s immersive experiences and award-winning attractions,” said His Excellency Mohamed Khalifa Al Mubarak, Chairman of Miral. “It gives us great pride to have partnered with Warner Bros. Consumer Products to launch the world’s largest Warner Bros. branded indoor theme park right here in Abu Dhabi.  As part of our fulfillment to Abu Dhabi’s ambition to drive increased visitors and enhance the UAE’s appeal as an international destination, we are thrilled that fans will be able to enjoy the outcome of this partnership and the massive, fun and engaging park offerings in a few months,” he continued.

The 1.65 million sq ft park promises to deliver guests with captivating experiences this July, bringing together some of the world’s most iconic characters and stories under one roof for the first time in the region. Featuring a total of 29 state-of-the-art rides, interactive family-friendly attractions and unique live entertainment, as well as a variety of authentically themed dining and shopping outlets, the park’s incredibly immersive environments, unique thrill rides and fan-favorite characters will create a truly unparalleled experience for all who visit.

“We have worked tirelessly with our partners at Miral to faithfully bring iconic franchises such as DC Entertainment, Looney Tunes and Hanna-Barbera to life in a truly immersive and authentic environment,” said Pam Lifford, President, Warner Bros. Consumer Products. “Delivering experiences and products that continue our brands’ storytelling and excite and engage fans is our primary goal, and we look forward to sharing this world-renowned attraction with them this summer.”

When guests step through the iconic Warner Bros. shield, they will enter a world where Super Heroes like Batman, Superman and Wonder Woman fight for justice and animated stars like Bugs Bunny, Wile E. Coyote and Scooby-Doo come to life in the most brilliant and awe-inspiring ways.

The excitement begins at Warner Bros. Plaza, an Art-Deco inspired land that celebrates the Golden Age of Hollywood and all things Warner Bros. A portal to the rest of the park, this land is famed for its All-Star Spectacular, a majestic show that brings the Warner Bros. film library to life. As guests step through to Metropolis, they will discover a gleaming urban landscape protected from evil by DC Super Heroes like Superman and other members of the Justice League including Wonder Woman, The Flash, Green Lantern, Cyborg and Aquaman. On the dark streets of Gotham City, guests will have the chance to walk alongside notorious DC Super-Villains such as The Joker, Harley Quinn, and The Riddler. Watch these criminals disappear into the shadows when Batman arrives to bring them to justice.  In Cartoon Junction, childhood memories come to life under year-round sunny skies alongside beloved characters including Bugs Bunny, Tom and Jerry, and Scooby-Doo. The Yabba-Dabba-Doo begins in pre-historic Bedrock, were guests will meet everyone’s favorite modern stone-age family, The Flintstones. Venturing into the animated storyland Dynamite Gulch, guests can experience Wile E. Coyote and the Road Runner’s dizzying dash firsthand, and keep an eye out for Marvin The Martian and The Jetsons.

Joe Kleimanhttp://wwww.themedreality.com
Raised in San Diego on theme parks, zoos, and IMAX films, InPark's Senior Correspondent Joe Kleiman would expand his childhood loves into two decades as a projectionist and theater director within the giant screen industry. In addition to his work in commercial and museum operations, Joe has volunteered his time to animal husbandry at leading facilities in California and Texas and has played a leading management role for a number of performing arts companies. Joe previously served as News Editor and has remained a contributing author to InPark Magazine since 2011. HIs writing has also appeared in Sound & Communications, LF Examiner, Jim Hill Media, The Planetarian, Behind the Thrills, and MiceChat His blog, ThemedReality.com takes an unconventional look at the attractions industry. Follow on twitter @ThemesRenewed Joe lives in Sacramento, California with his wife, dog, and a ghost.
Share
Facebook
Twitter
Linkedin
Email
Print
WhatsApp
Pinterest
ReddIt
Tumblr
Previous articleEuro Attractions Show 2018 Set to Host Largest Exhibit Space in Event History
Next articleWater Odyssey introduces new Massive Splash