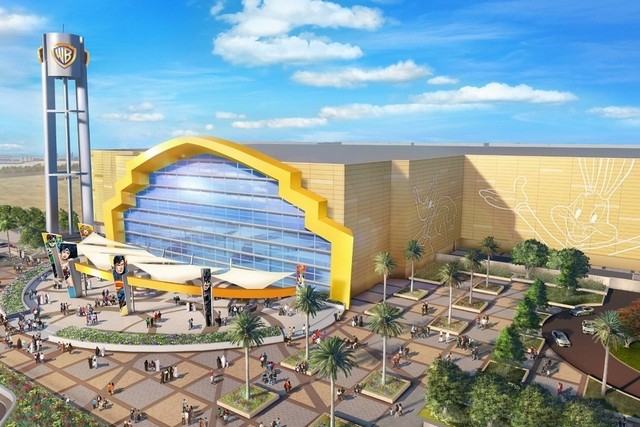 Miral has announced that Warner Bros. World Abu Dhabi, an indoor theme park spanning 1.65 million square feet, will be home to 29 immersive rides, entertaining shows and interactive attractions. The fully-immersive world-class park will also include retail outlets featuring a wide collection of merchandise inspired by Warner Bros. franchises as well as a full range of dining options from full-service sit down to grab and go.

Warner Bros. World Abu Dhabi will bring together Super Heroes and Super-Villains from the DC Universe, including Batman, Superman and Wonder Woman, as well as Warner Bros.’ iconic animated properties such as Bugs Bunny, Scooby-Doo and Tom and Jerry, creating a family-friendly destination for fans of all ages.

“We are very excited to be announcing the number of rides, shows and attractions for Warner Bros. World Abu Dhabi,” said Mohamed Abdullah Al Zaabi, CEO of Miral. “We’re very delighted to see the park coming together and on track for the 2018 launch.”

“Warner Bros. World Abu Dhabi marks an important step in the development of Yas Island as a complete leisure and entertainment destination, and we can’t wait to share it with the world,” he added.

Theming is currently underway throughout the park and will immerse guests of all ages into the world of Warner Bros.’ best-in-class brands. Factory acceptance testing for all rides is nearly done, and delivery and installation of rides has already started.

Warner Bros. World Abu Dhabi comes as part of Yas Island’s commitment to attracting 48 million annual visits by 2022. The ambitious vision is aimed at transforming the island into a world-class leisure and entertainment destination that caters to everyone around the world.

Joe Kleimanhttp://wwww.themedreality.com
Raised in San Diego on theme parks, zoos, and IMAX films, InPark's Senior Correspondent Joe Kleiman would expand his childhood loves into two decades as a projectionist and theater director within the giant screen industry. In addition to his work in commercial and museum operations, Joe has volunteered his time to animal husbandry at leading facilities in California and Texas and has played a leading management role for a number of performing arts companies. Joe previously served as News Editor and has remained a contributing author to InPark Magazine since 2011. HIs writing has also appeared in Sound & Communications, LF Examiner, Jim Hill Media, The Planetarian, Behind the Thrills, and MiceChat His blog, ThemedReality.com takes an unconventional look at the attractions industry. Follow on twitter @ThemesRenewed Joe lives in Sacramento, California with his wife, dog, and a ghost.
Share
Facebook
Twitter
Linkedin
Email
Print
WhatsApp
Pinterest
ReddIt
Tumblr
Previous articleGES Brings Magic of Exploration Alive at National Geographic Museum
Next articleNew Story-Intensive Water Ride to Open at Disney World’s Typhoon Lagoon