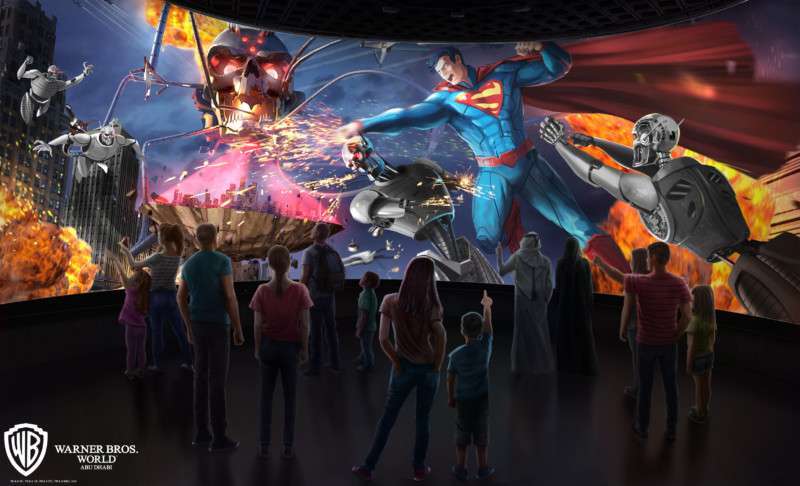 As guests walk through the iconic Warner Bros. shield, they will enter a world where Super Heroes like Batman, Superman and Wonder Woman fight for justice and animated stars like Bugs Bunny, Wile E. Coyote and Scooby-Doo come to life.

Beyond the arches of Warner Bros. Plaza, guests will be transported to the bright, bustling and modern cityscape of Metropolis. Known as “The City of Tomorrow,” the Manhattan-like skyscraper city is protected from villains by DC Super Heroes like Superman and other members of the Justice League, including Wonder Woman, Aquaman, Green Lantern, Cyborg and The Flash, in addition to the Teen Titans.

The iconic Daily Planet, Metropolis’ famed media conglomerate, is home to Superman 360: Battle for Metropolis, an action-packed attraction that features the Man of Steel in a riveting battle of good versus evil that will decide the fate of Metropolis. 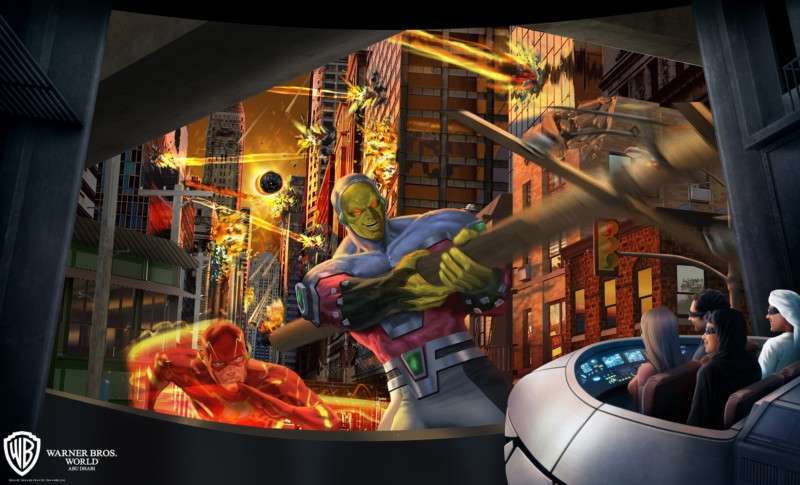 Thrill enthusiasts entering the legendary Hall of Justice, the massive headquarters of the Justice League, can hop onboard Justice League: Warworld Attacks, a dark ride that utilizes immersive media and special effects to take guests on an unforgettable journey as they team up with the Justice League to fight off invaders from another galaxy. 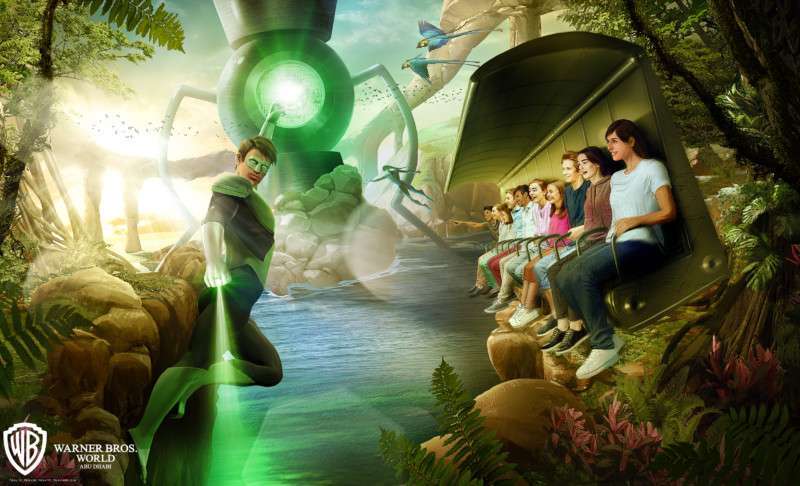 Other exciting attractions that Metropolis will include are Green Lantern: Galactic Odyssey, a 4D “flying theatre” that transports guests across the cosmos to extraordinary worlds enriched by multi-sensory special effects, and Teen Titans Training Academy, a multi-level play area featuring a zipline and other physical activities that invite aspiring heroes to showcase their skills alongside the legendary Teen Titans.

When it comes to dining, guests can choose from Ace O’ Clubs, Bibbo Bibbowski’s quick service restaurant or Park Ridge Market, a grab-and-go café, to satisfy their hunger.

Guests can also take home a piece of Warner Bros. World Abu Dhabi by visiting souvenir shops such as Zatanna Books & Magical Curiosities and Justice League Hero Supply. Fans can memorialize their visit to the Daily Planet at Front Page Photo, where they can appear on the front-page of the famed publication, and pick up special editions of the newspaper from the Daily Planet Newsstand.

“With the park well on track to open its doors to the public within mere months, we are incredibly excited to share our story with audiences around the world, and will be announcing the exact opening date very soon.” said Mark Gsellman, Park General Manager. “The six different and immersive lands will seamlessly transport guests of all ages to the lands of their favorite DC Super Heroes and beloved Warner Bros. Animation characters. As guests enter Warner Bros. World Abu Dhabi, they’ll discover the Warner Bros. Plaza—a land inspired by the Golden Age of Hollywood—to celebrate all things Warner Bros.! From there, park-goers can step through one of the many portals that lead to our other lands including Metropolis, Gotham City, Cartoon Junction, Bedrock and Dynamite Gulch—each of which offers a unique set of experiences and authentically themed restaurants and shopping outlets.”

Childhood memories come to life in Cartoon Junction, where guests will discover iconic characters and animated stories from Looney Tunes and Hanna-Barbera. In a land filled with fun adventures, Tom and Jerry can be spotted getting up to their usual hijinks, while Scooby-Doo and the gang follow clues in the hunt to solve spooky mysteries. Additional animated stars like Bugs Bunny, Daffy Duck, Tweety, Sylvester, Tasmanian Devil (Taz), Pepé Le Pew, Elmer Fudd and many others can also be found roaming around in Cartoon Junction. 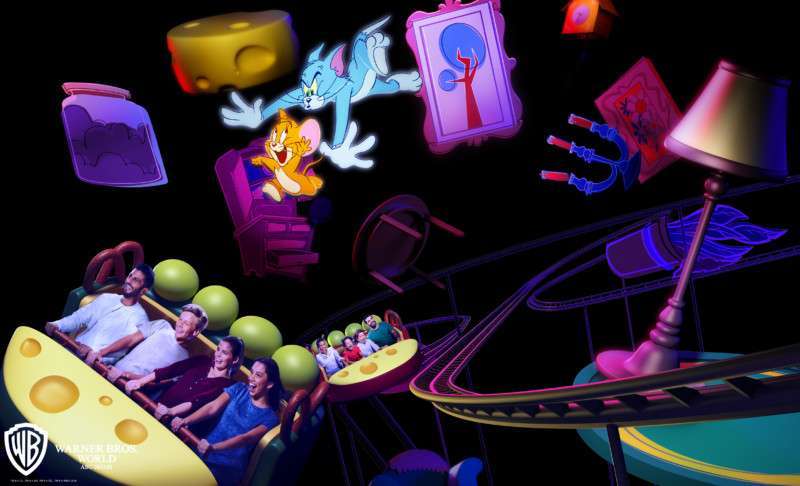 Featuring nine family-friendly rides and attractions, this land offers fun for both kids, and kids at heart. In the center of Cartoon Junction’s town square is the Tom and Jerry Swiss Cheese Spin, a ride where guests can experience a dizzying spinning coaster that careens them throughout the dynamic duo’s house on a fast-moving chase full of twists and turns (and cheese). On the outskirts of town, a classic haunted dark ride gets a trackless twist in Scooby-Doo: The Museum of Mysteries. Guests will hop in their very own Mystery Machines to follow Scooby and the gang as they try to untangle the silly, spooky secrets of the museum, culminating in a crazy chase reminiscent of the hijinks in the classic cartoons. 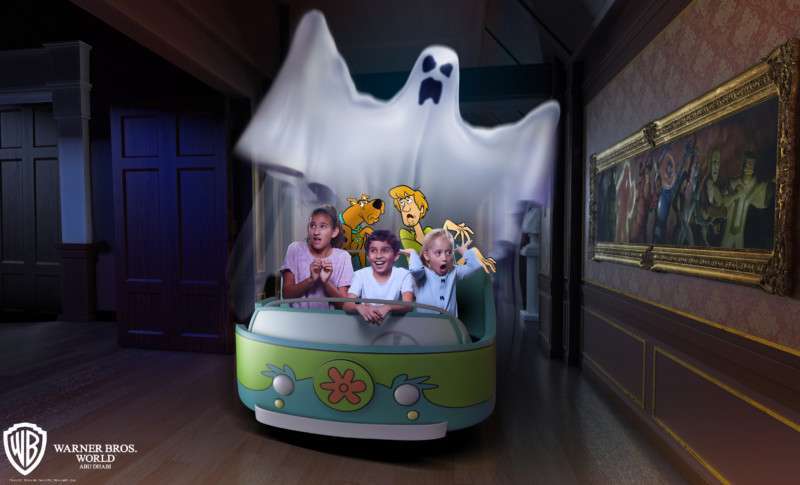 Other attractions include Ani-Mayhem, an interactive dark ride that takes passengers on a rollicking mission to deliver their own cartoon chaos, Meet Bugs! (and Daffy), a one-of-a-kind walkthrough experience at the vintage downtown theater where guests can join Bugs Bunny on stage, and Cartoon Junction Carousel, a colorful twist on a classic carousel. Cartoon Junction is also home to ACME Factory which features three kid-friendly rides of its own, including Ricochet Racin’ with Taz, a car ride that whips racers around a track, and Daffy’s Jet-Propelled Pogo Stick, featuring a vertical ‘jump’ tower, Tweety Wild Wockets, a fun ride that spins its passengers “awound and awound” as they try to avoid that “bad ol’ puddy tat,” Sylvester.

Hungry guests drop in at ACME Commissary, where quick service food is served with ACME flair, and those with a sweet tooth can indulge in a sweet treat at Huckleberry Hound Pies, Penelope Pitstop Cotton Candy, Daffy Snacks, or Yogi Bear and Boo Boo Ice Cream.

Fans in search of themed-souvenirs should stop at the ACME Company Store, which is dedicated to fun and play—the Looney Tunes way, and C.J. Mercantile, Cartoon Junction’s General Store located in the town’s emporium, to find souvenirs inspired by fan-favorite characters. This vibrant land is also home to the Hare Salon, a shop that celebrates Bugs Bunny’s fun disguises and Fudd Hardware, featuring Elmer Fudd’s collection of toys and tools for kids,

Joe Kleimanhttp://wwww.themedreality.com
Raised in San Diego on theme parks, zoos, and IMAX films, InPark's Senior Correspondent Joe Kleiman would expand his childhood loves into two decades as a projectionist and theater director within the giant screen industry. In addition to his work in commercial and museum operations, Joe has volunteered his time to animal husbandry at leading facilities in California and Texas and has played a leading management role for a number of performing arts companies. Joe previously served as News Editor and has remained a contributing author to InPark Magazine since 2011. HIs writing has also appeared in Sound & Communications, LF Examiner, Jim Hill Media, The Planetarian, Behind the Thrills, and MiceChat His blog, ThemedReality.com takes an unconventional look at the attractions industry. Follow on twitter @ThemesRenewed Joe lives in Sacramento, California with his wife, dog, and a ghost.
Share
Facebook
Twitter
Linkedin
Email
Print
WhatsApp
Pinterest
ReddIt
Tumblr
Previous article7thSense Design Premiers New System and Hardware Features at ISE 2018
Next articleRenovations Near Completion on PGAV Headquarters