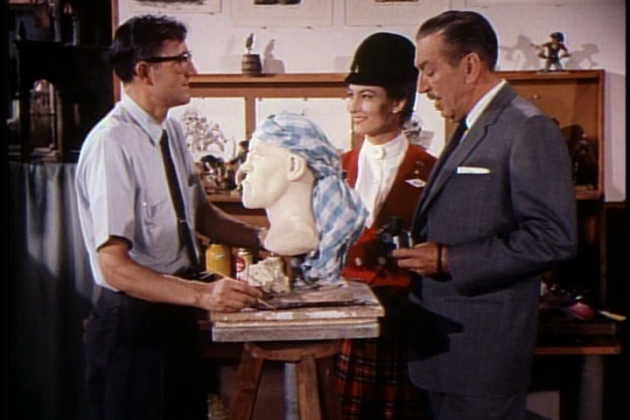 Our hearts go out to the family, friends, and fans of Blaine Gibson—artist, Imagineer, and Disney Legend—who passed away today on July 5, 2015.

Born on February 11, 1918, in Rocky Ford, Colorado, Gibson joined The Walt Disney Studios in 1939, working on both character and effects animation in major feature-length films up through One Hundred and One Dalmatians.

After Walt saw an exhibition of Gibson’s sculpture work in 1954, the animator was reassigned to work on the Disneyland project. In 1961, Gibson joined WED Enterprises—now, Walt Disney Imagineering—as the head of the sculpture department. He would go on to sculpt hundreds of Audio-Animatronics in major Disneyland attractions, including Great Moments with Mr. Lincoln, Pirates of the Caribbean, and every president up to President George W. Bush in the Hall of Presidents.

In 1993, Gibson was brought out of retirement to sculpt the famed “Partners” statue, now located at Disney Parks & Resorts all over the world. More recently, Gibson visited The Walt Disney Family Museum on December 5, 2009—Walt’s birthday—to participate in a panel as part of the “Memories of Walt: A Conversation with Legends” series. His talent, support, and friendship will be missed, but his legacy will always remain.

Joe Kleimanhttp://wwww.themedreality.com
Raised in San Diego on theme parks, zoos, and IMAX films, InPark's Senior Correspondent Joe Kleiman would expand his childhood loves into two decades as a projectionist and theater director within the giant screen industry. In addition to his work in commercial and museum operations, Joe has volunteered his time to animal husbandry at leading facilities in California and Texas and has played a leading management role for a number of performing arts companies. Joe previously served as News Editor and has remained a contributing author to InPark Magazine since 2011. HIs writing has also appeared in Sound & Communications, LF Examiner, Jim Hill Media, The Planetarian, Behind the Thrills, and MiceChat His blog, ThemedReality.com takes an unconventional look at the attractions industry. Follow on twitter @ThemesRenewed Joe lives in Sacramento, California with his wife, dog, and a ghost.
Share
Facebook
Twitter
Linkedin
Email
Print
WhatsApp
Pinterest
ReddIt
Tumblr
Previous article
Björn Ulvaeus of ABBA to Keynote Leadership Breakfast at IAAPA’s Euro Attraction Show
Next article
Super 78 Introduces Mushroom VR Review and Approval Tool for Themed Experience Venues