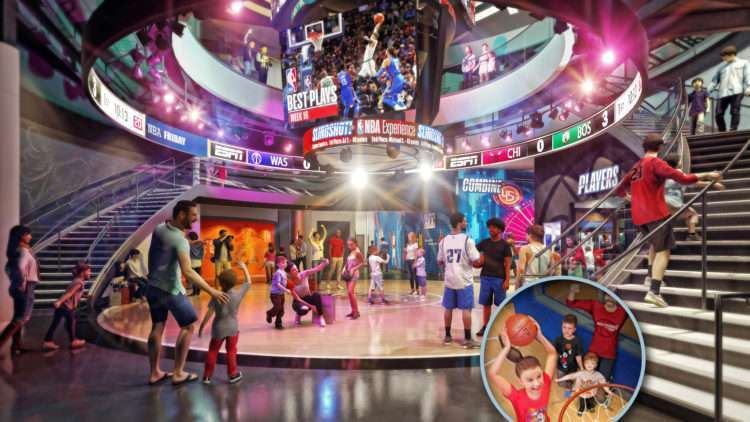 For the first time, Walt Disney World Resort is giving guests and basketball fans a glimpse of the exciting action coming to the new NBA Experience at Disney Springs in summer 2019. This one-of-a-kind destination – developed by Walt Disney Imagineering in collaboration with the NBA – will feature hands-on activities that immerse guests into the world of professional basketball.

“Developed with the NBA, and inspired by the league’s 29 arenas around the country, NBA Experience will highlight the heart-pounding action and excitement of the NBA world,” said Stan Dodd, Executive Producer, Walt Disney Imagineering. “From training simulations and clock-racing competitions to fan-favorite NBA moments – we’re bringing new experiences and thrilling games to life to make fans truly feel like a star player.”

“The Walt Disney Imagineering team has unparalleled expertise in creating best-in-class attractions for the millions of guests who visit their parks each year,” said Salvatore LaRocca, President, Global Partnerships, NBA. “The NBA Experience will be a destination for basketball fans from all over the world, and we are excited to partner with Disney to bring new and lifelong fans closer to the game.” 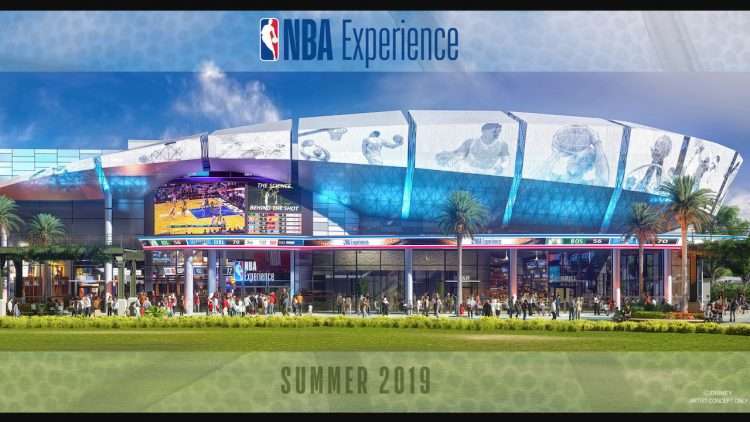 NBA Experience will feature something for everyone. Visitors will get a glimpse into the atmosphere at the NBA Draft, participate in their own scouting reports, go through pregame preparations, and step onto the court to make clutch shots and highlight reel-worthy slam dunks. With a dozen unique and innovative activities, guests will:

Experience one of the biggest milestones for a basketball player at the NBA Draft with a photo moment that re-creates the atmosphere of the draft stage.

Track and improve their jump shots and passing skills in a replicated NBA Combine challenge, complete with a scouting report that highlights their stats at the end of the session.

Step onto the court and hear the roar of the crowd as they maneuver through a series of timed shots to aim for a high score.

Test their ball-handling skills with an interactive trainer who will challenge them with a variety of dribbling routines.

Use an oversized slingshot to launch basketballs at hoops of varying heights, making as many shots as possible before the clock runs out in this thrilling timed challenge.

Immerse themselves in the rich legacy and history of NBA and WNBA championship-winning teams.

Test their knowledge of the NBA and WNBA – past and present – during a trivia game with up to 25 participants competing against one another to be champion.

Enjoy two 180-degree cinematic presentations that showcase the in-arena experience moments before the start of the game, as well as special stories from the players’ perspectives.

Take a seat at an interactive multi-screen module to watch replay clips from NBA games, using the tools at their stations to make the right calls.

In addition to these games and competitions, NBA Experience will also include a retail store featuring exclusive NBA-themed merchandise designed by Disney.

NBA Experience at Disney Springs is just one of several ways Walt Disney World Resort is continuing to grow and add new experiences to delight and entertain guests. This new destination is also the latest example of the rich basketball tradition at Walt Disney World, which hosts the Jr. NBA Global Championship, AAU National Championships and the AdvoCare Invitational at the ESPN Wide World of Sports Complex.

Joe Kleimanhttp://wwww.themedreality.com
Raised in San Diego on theme parks, zoos, and IMAX films, InPark's Senior Correspondent Joe Kleiman would expand his childhood loves into two decades as a projectionist and theater director within the giant screen industry. In addition to his work in commercial and museum operations, Joe has volunteered his time to animal husbandry at leading facilities in California and Texas and has played a leading management role for a number of performing arts companies. Joe previously served as News Editor and has remained a contributing author to InPark Magazine since 2011. HIs writing has also appeared in Sound & Communications, LF Examiner, Jim Hill Media, The Planetarian, Behind the Thrills, and MiceChat His blog, ThemedReality.com takes an unconventional look at the attractions industry. Follow on twitter @ThemesRenewed Joe lives in Sacramento, California with his wife, dog, and a ghost.
Share
Facebook
Twitter
Linkedin
Email
Print
WhatsApp
Pinterest
ReddIt
Tumblr
Previous article
Manchester United to open team-based LBE centers throughout China in partnership with Harves
Next article
Aquatica Orlando becomes first waterpark designated as Certified Autism Center