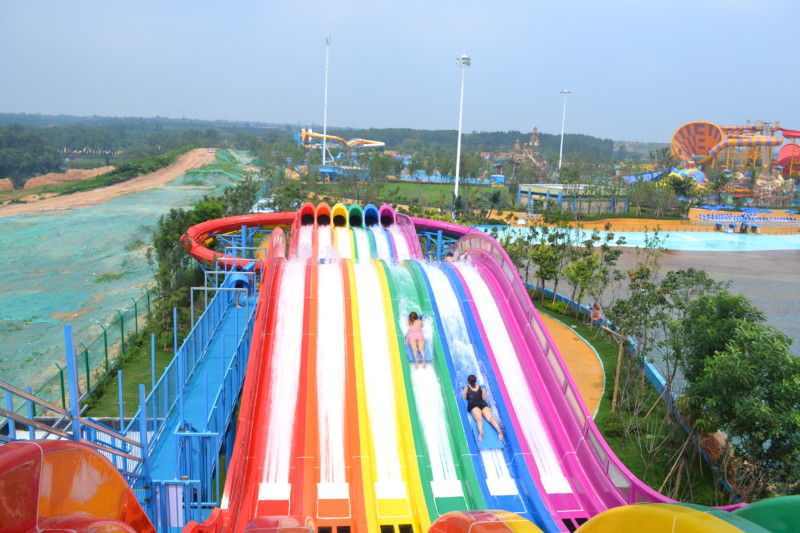 Orlando, FL, USA (November 16, 2016) — The IAAPA Brass Ring Awards’ Best New Product Awards annually recognize the best new products or services in the amusement parks and attractions industry. This year, they have acknowledged WhiteWater’s Mat Blaster, a first-of-its-kind slide, in the Waterpark Ride/Attractions category, as well as, Smart Blast, the latest in energy-saving technology for waterparks, in the Technology Applied to Amusements category.

Mat Blaster combines the fun of mat racing with the thrill of an uphill water coaster, the inspiration for which came from riding a Master Blaster with a foam mat. On the initial drop, riders plunge headfirst down a 4 meter (13 feet) drop into a valley before climbing two hills that lead into a 360-degree Whizzard loop, making it a truly unique ride experience.

“WhiteWater has been making the Master Blaster for decades, and now we’ve taken that iconic ride experience and combined it with the engaging sensation of a mat ride to create a brand new attraction. We’re giving park guests a completely new and unique feeling as they race up and down hills, headfirst on a mat, there’s no other ride like it on the market”, commented Sean Hinton, WhiteWater’s President, Waterparks and Attractions Division.

Hinton continued, “After a lot of hard work by everyone at WhiteWater, we were thrilled to see how excited guests at our first installation at Yinji Xinmi were to ride Mat Blaster.” The world’s first Mat Blaster has been in operation since June 2016 at Yinji Xinmi Waterpark, China’s largest waterpark. Its compact layout, scalable size, and reduced tower costs may have made it a hit with park operators, but it’s the ride’s easy accessibility, thrilling lifts and dips, and 360-degree loop that have made it a ‘must-do’ attraction for guests.

The ride experience isn’t the only feature that Mat Blaster has borrowed from its inspiration, the Master Blaster. The uphill sections of Mat Blaster are powered by WhiteWater’s award-winning Smart Blast technology. “Thinking like the operator that we started as, we’ve engineered significant savings by introducing our Smart Blast technology to cut power consumption by 50% without having to compromise on any of the fun”, remarked Geoff Chutter, WhiteWater’s CEO.

Smart Blast is the first specially designed system to save park operators money when operating their Master Blaster or Mat Blaster. These Blasters are traditionally powered by advanced water propulsion technology to deliver a gravity-defying ride experience up the steep inclines and multiple twists and turns, which normally consumes a considerable amount of power.

In the past, the jets used to power guests uphill would have been continuously on, pumping water non-stop, resulting in an inefficient use of power and water. WhiteWater has solved this uneconomical use of energy by developing their Smart Blast technology which uses variable frequency drives (VFDs) and a proprietary control algorithm to dynamically adjust pump speeds while the ride is in operation. The new system saves significant power by only ramping up motor speed when it’s needed to drive riders uphill. It also reduces the wear and tear on the mechanical equipment and is more energy efficient because the motor is not constantly running at a set speed.

As Keith Campden, WhiteWater’s Mechatronics Manager explains, “the new Smart Blast feature brings the latest control technology to the waterpark. As well as providing park operators with reduced wear and tear on equipment and reduced energy consumption, it also enhances the thrill factor for guests by making it a more dynamic ride experience.” The inaugural installation of Smart Blast is at MASSIV, the world’s tallest water coaster, at Schlitterbahn Galveston Island in Texas.

To find out how WhiteWater can help you make your parks more efficient and sustainable, visit their booth this week at IAAPA (booth #2240).