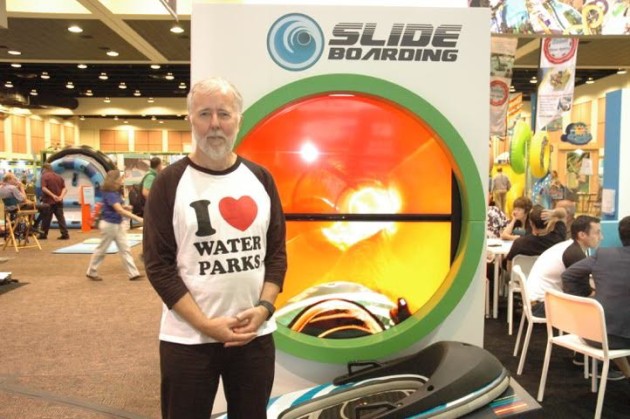 “The WWA’s Hall of Fame exists to honor industry leaders like Andrew Wray,” comments Mark Moore, WWA Board of Directors Chair, “Through his work at WhiteWater, Wray been an industry leader in designing and building some of the world’s most memorable attractions. He also played an early role in pioneering wave pool technology and design, which has led wave pools to become an attraction staple for waterparks all over the world.”

Andrew Wray graduated from the University of Glasgow in Scotland as a mechanical engineer and begin working for his father at Barr + Wray, a manufacturer of pumps, water treatment and filtration systems. In the mid 1980’s, Andrew began designing and perfecting wave generating equipment and brought the technology to Canada through Barr & Wray North America, of which Andrew was president. In 1987, a natural partnership was formed as Andrew Wray and WhiteWater joined forces to deliver the world’s most advanced wave pool systems to the amusement industry.

Andrew was heavily involved in growing WhiteWater to the global company it is today and bringing fully immersive waterparks to the international market. With a growing team of Waterparks and Attractions experts lead by Andrew, WhiteWater was able to increase their efforts in bringing innovative products to markets all over the world.

Andrew’s dedication to his client’s needs through customer service excellence is one of the characteristics that have led to WhiteWater’s success. Long term relationships have always been Andrew’s passion and WhiteWater’s clients trust his advice because of his open-minded, holistic approach to the waterpark business. It is because of Andrew’s leadership, innovation and sharp mind that he has landed a well-deserved place in the WWA Hall of Fame.

Joe Kleimanhttp://wwww.themedreality.com
Raised in San Diego on theme parks, zoos, and IMAX films, InPark's Senior Correspondent Joe Kleiman would expand his childhood loves into two decades as a projectionist and theater director within the giant screen industry. In addition to his work in commercial and museum operations, Joe has volunteered his time to animal husbandry at leading facilities in California and Texas and has played a leading management role for a number of performing arts companies. Joe previously served as News Editor and has remained a contributing author to InPark Magazine since 2011. HIs writing has also appeared in Sound & Communications, LF Examiner, Jim Hill Media, The Planetarian, Behind the Thrills, and MiceChat His blog, ThemedReality.com takes an unconventional look at the attractions industry. Follow on twitter @ThemesRenewed Joe lives in Sacramento, California with his wife, dog, and a ghost.
Share
Facebook
Twitter
Linkedin
Email
Print
WhatsApp
Pinterest
ReddIt
Tumblr
Previous articleTom Mehrmann to Depart as CEO of Ocean Park in 2016
Next articleSteve Bilton Joins Team at Ride Entertainment as Business Development Associate