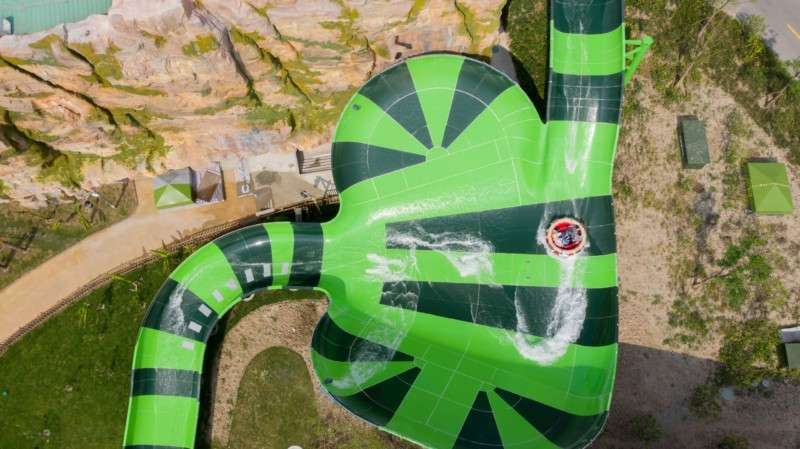 WhiteWater was recognized by the International Association of Amusement Parks and Attractions (IAAPA) with a Brass Ring Award for Spinning Rapids Ride in the Best New Product category.

Installed in Shanghai Haichang Ocean Park, China, Lava Drifting is not just the longest spinning rapids ride in the world, but also the world’s first spinning rapids ride with actual rapid rivers. The water ride depicts a volcano theme while combining the spins and twists of an exhilarating river rapids journey that culminates with the oscillating movements and steep drop from the wings of a Manta.

Approximately 1 kilometre long, the ride stands out for differentiating the classic Spinning Rapids Ride experience by including conveyor lifts, actual rapid rivers, tunnels, multiple drops, and the concluding giant Manta feature. Flowing through the park and around other attractions with elevated river channels that lead into and out of the ride flume, the ride is spread across different elevation points, coming to the exciting finale with a steep drop into the Manta and oscillating exit.

Nathan A. Jones, President, Park Attraction at WhiteWater says, “There’s nothing more gratifying then conceiving an idea, building a team to deliver an attraction, and being recognized by the industry for the hours of work and determination that ultimately delivered the ride. The Spinning Rapids Ride at Haichang is the first water ride ever to combine elements from the spinning rapids ride, a traditional rapids ride, and new iconic water slide element. I’m Incredibly proud of the team and accept this Brass Ring on their behalf.”

From conception to opening the ride to the public, the project saw collaboration between a large number of people and resources. Bringing together the best of industry collaborations, the project had a team of 40 people at WhiteWater across various functions ranging from product development, engineering, design and slide path seamlessly collaborate with the client,

the Legacy Entertainment team that did the park layout, Cogito Automation who worked on the control system and Van Stone who provided the conveyor system.

Legacy Entertainment’s experience designer Bob Baranick developed the preliminary layout for the ride, which remained largely unchanged in the final product. Speaking about Legacy’s collaboration with WhiteWater, Taylor Jeffs, Legacy’s President & Chief Creative Officer stated, “I have been a huge fan of this ride system since first riding L’oxygénarium at Parc Astérix in 2002, so it is a great pleasure to collaborate with WhiteWater on the most ambitious incarnation of this type of water ride ever conceived.”

Joe Kleimanhttp://wwww.themedreality.com
Raised in San Diego on theme parks, zoos, and IMAX films, InPark's Senior Correspondent Joe Kleiman would expand his childhood loves into two decades as a projectionist and theater director within the giant screen industry. In addition to his work in commercial and museum operations, Joe has volunteered his time to animal husbandry at leading facilities in California and Texas and has played a leading management role for a number of performing arts companies. Joe previously served as News Editor and has remained a contributing author to InPark Magazine since 2011. HIs writing has also appeared in Sound & Communications, LF Examiner, Jim Hill Media, The Planetarian, Behind the Thrills, and MiceChat His blog, ThemedReality.com takes an unconventional look at the attractions industry. Follow on twitter @ThemesRenewed Joe lives in Sacramento, California with his wife, dog, and a ghost.
Share
Facebook
Twitter
Linkedin
Email
Print
WhatsApp
Pinterest
ReddIt
Tumblr
Previous articleAZA-accredited zoos and aquariums contribute $24 billion to US economy
Next articleSeaWorld Orlando wins IAAPA Brass Ring Award for Christmas Celebration