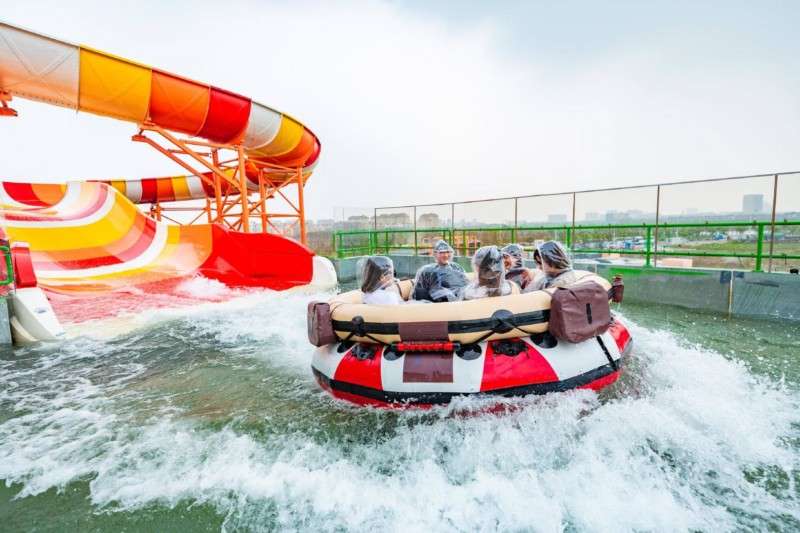 3 firsts in one ride

Opened in May 2019, Lava Drifting stands out for not just being the longest spinning rapids ride in the world, but also the world’s first spinning rapids ride with actual rapid rivers. Included from the very first park concept created by Legacy back in 2013, this water ride depicts a volcano theme while combining the spins and twists of a river rapids journey that culminates with the oscillating movements and steep drop from the wings of a Manta.

Approximately 1 kilometre long, the ride stands out for differentiating the classic Spinning Rapids Ride experience by including conveyor lifts, actual rapid rivers, tunnels, multiple drops, and the concluding giant Manta feature. Flowing through the park and around other attractions with elevated river channels that lead into and out of the ride flume, the ride is spread across different elevation points, coming to a finale with a steep drop into the Manta and oscillating exit.

Legacy Entertainment’s experience designer Bob Baranick developed the preliminary layout for the ride, which remained largely unchanged in the final product. Speaking about Legacy’s collaboration with WhiteWater, Taylor Jeffs, Legacy’s President & Chief Creative Officer shared, “I have been a huge fan of this ride system since first riding L’oxygénarium at Parc Astérix in 2002, so it is a great pleasure to collaborate with WhiteWater on the most ambitious incarnation of this type of water ride ever conceived.”

“Legacy always puts a great deal of value on the integration of attractions into their environments, and as such the ride path has been carefully woven through the Rainbow Falls section of the park, including a climax in the park’s iconic volcano. This symbiotic relationship is instrumental in activating the land,” added Taylor.

From an engineering perspective, the Spinning Rapids Ride in Haichang is a technical showcase. This ride needed a control system to manage the world’s longest ride path with precision, safety and accuracy. Delivering on all expectations, this controls system integrates multi-zone control, advanced vehicle tracking and state-of-the-art safety elements.

From conception to opening the ride to the public, the project saw collaboration between a large number of people and resources to bring this dream of a Spinning Rapids Fusion alive. Whether it was fitting the ride path into the highly detailed layout of the park, adding a Manta feature to a spinning rapids ride, deploying real river rapids or installing a radically different conveyor system (Van Stone) and rafts, this project had many elements that needed field research and testing, since they were a first-of- their-kind. The design and build teams involved the seamless collaboration of people across different teams within WhiteWater and outside. The project had a team of 40 people at WhiteWater across various functions ranging from product development, engineering, design and slide path that seamlessly collaborated with the client, the Legacy Entertainment team that did the park layout, Cogito Automation who worked on the control system and Van Stone who provided the conveyor system.

Paul Chutter, Chief Business Development Officer, WhiteWater sums up how proud the team is of this groundbreaking ride. “In many ways this ride represents the best of industry collaborations to deliver on the client’s ambitious visions. Working to realize Legacy’s concept and bringing in additional skill sets to compliment our engineering and manufacturing, we’ve created a ride which delivers in every way. Guests enjoy the longest rapids journey in the world which concludes with a first ever Manta as part of a ‘dry’ ride and Haichang Ocean Park get a feat of engineering talents meeting WhiteWater’s high safety and reliability standards.”