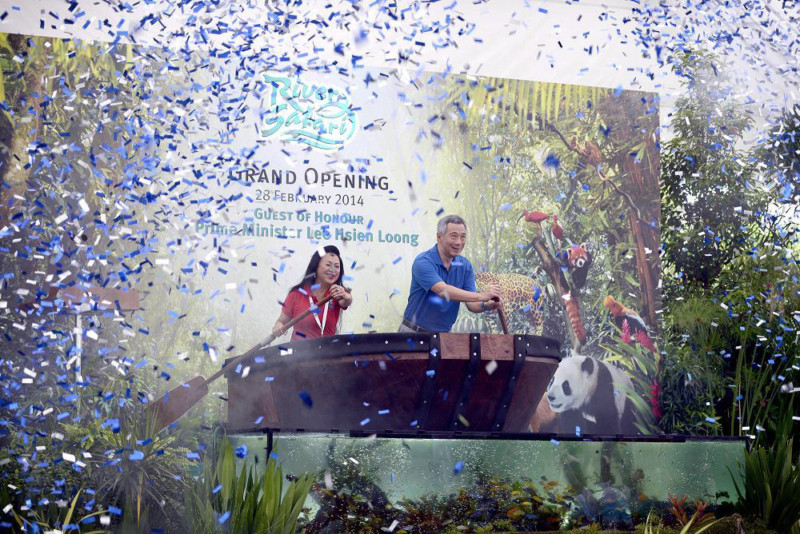 Singapore — Mandai, an area synonymous with Singapore Zoo and Night Safari, has become even more wild with the much-anticipated official opening of River Safari, Asia’s first and only river-themed wildlife park.

River Safari is the latest addition to Wildlife Reserves Singapore’s portfolio of award-winning parks, which includes Jurong Bird Park, Night Safari, and Singapore Zoo. With a unique focus on freshwater habitats, the park adds a new dimension to the wildlife experience in Singapore.

Prime Minister Lee Hsien Loong together with Mr S Iswaran, Minister, Prime Minister’s Office, Second Minister for Home Affairs and Trade & Industry having an up-close encounter with a Brazilian tapir along the Amazon River Quest on 28 February 2014, at the Grand Opening of River Safari. All photos provided by Wildlife Reserves Singapore.

Ms Claire Chiang, Chairman, Wildlife Reserves Singapore, said, “We are very proud today to officially introduce River Safari to the world. From conceptualisation and design to construction and completion, River Safari represents our dedication to conserve wildlife, our commitment to educate the public about threats to freshwater habitats, and our passion to create an enriching and fun recreational venue for visitors all over the world.”

The journey to creating Asia’s first and only river-themed park started with an idea to create a freshwater aquarium to complement the offerings of Singapore Zoo. This spark evolved and gave rise to River Safari.

Prime Minister Lee Hsien Loong admires the gracefulness of the endangered giant river otters at Amazon Flooded Forest as they swim by, during River Safari’s Grand Opening on 28 February 2014. All photos provided by Wildlife Reserves Singapore.

Today, the 12-ha River Safari offers visitors a wildlife adventure inspired by the world’s most iconic rivers, including the Amazon, Ganges, Mekong, Nile and Yangtze rivers. Built at a cost of $160 million, River Safari houses one of the world’s largest collections of freshwater fauna. To date, the park features 6,000 animal specimens representing 200 species, of which 40 are threatened. These include river giants and mega fishes such as the giant river otter, giant freshwater stingray, Mekong giant catfish and Singapore’s very own pair of resident giant pandas, Kai Kai and Jia Jia.

WRS parks are world-renowned for their open concept exhibit design, and with River Safari, the team pushed the boundaries further and created a park that would provide visitors with an unforgettable adventure through the world’s most iconic rivers.

“The park has been well-received since we opened the Giant Panda Forest in Nov 2012, and our soft opening in Apr 2013. We have already welcomed more than 1.1 million visitors from all over the world and this shows that visitors are curious about the world of river habitats,” said Ms Chiang.

When visiting River Safari, visitors can look forward to interactive and digital educational interpretives, discovery stations where visitors can learn more about animals and freshwater conservation issues and behind-the-scene tours which provide a clearer glimpse into the world these animals live in.

Joe Kleimanhttp://wwww.themedreality.com
Raised in San Diego on theme parks, zoos, and IMAX films, InPark's Senior Correspondent Joe Kleiman would expand his childhood loves into two decades as a projectionist and theater director within the giant screen industry. In addition to his work in commercial and museum operations, Joe has volunteered his time to animal husbandry at leading facilities in California and Texas and has played a leading management role for a number of performing arts companies. Joe previously served as News Editor and has remained a contributing author to InPark Magazine since 2011. HIs writing has also appeared in Sound & Communications, LF Examiner, Jim Hill Media, The Planetarian, Behind the Thrills, and MiceChat His blog, ThemedReality.com takes an unconventional look at the attractions industry. Follow on twitter @ThemesRenewed Joe lives in Sacramento, California with his wife, dog, and a ghost.
Share
Facebook
Twitter
Linkedin
Email
Print
WhatsApp
Pinterest
ReddIt
Tumblr
Previous article
Merlin Entertainments Announces 2013 Financial Results; LEGOLAND Dubai Set for 2016 Opening
Next article
Gateway Ticketing User Group Meeting to Take Place at Denver Museum of Nature and Science August 11-14