World’s First Polercoaster to Be Centerpiece of LakePoint Sporting Community 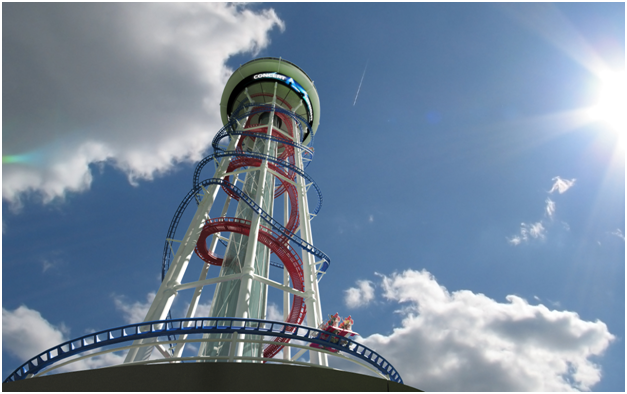 Emerson, Ga. — One of the most unique thrill rides is coming to the world’s largest sports vacation destination. The Polercoaster™, created by ‘inventioneer’ Bill Kitchen, designer of the SkyCoaster and SkyVenture, will be built at LakePoint Sporting Community. Located in Emerson, GA, north of Atlanta, LakePoint Sporting Community is a 1,400+-acre development under construction which will feature state-of-the-art venues for 29 of America’s favorite youth sports and 5 million square feet of mixed-use development. Along with sports, LakePoint will include approximately 29 on-site hotels, restaurants, retail shops, office space and several other entertainment venues.

The Polercoaster™ is a double engineering marvel that will provide visitors an opportunity to ride one of the tallest and most thrilling roller coasters in the United States, as well as visit the observation tower with retail, restaurant/bar and observation area at the top. Polercoaster™ is a full coaster experience in a small footprint, including multiple loops, barrel rolls and high G maneuvers, making it a ride like nothing on the market. The vertical nature of the Polercoaster™ creates an amazing visual “icon” for LakePoint with potential for exceptional lighting options.

US Thrill Rides has assembled a world-class team to build the attraction, including Celtic Engineering, Haskell Steel, and S&S-Sansei.

“At over 325 feet tall, the planned Polercoaster™ at LakePoint will be the tallest coaster in the Southeast and one of the top-ten tallest coasters in the United States. We expect to deliver high thrills for more than 4 million annual visitors to LakePoint,” said US Thrill Rides President, Michael Kitchen. “We believe the Polercoaster™ will add an electrifying view and an exciting high thrill attraction to the LakePoint development.” 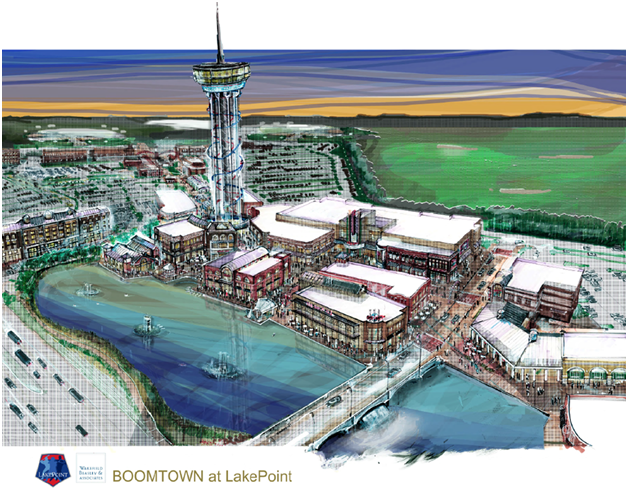 Since the November 1, 2012 groundbreaking ceremony, LakePoint has formed partnerships with some of the world’s most recognized brands including, The Coca-Cola Company, Bass Pro Shops and Greg Norman Golf Academy.  Bass Pro Shops, America’s most popular outdoor store, will open a 104,000 square foot Bass Pro Shops Outpost® store at LakePoint.  In addition to being the exclusive beverage provider, The Coca-Cola Company will build its first POWERADE Sports Safety and Hydration Lab at LakePoint. Greg Norman is building a first-class golf facility and Greg Norman Golf Academy within the LakePoint complex.

“We are thrilled to be bringing the most unique thrill ride attraction to our LakePoint Entertainment Village called BoomTown,” said LakePoint Co-CEO and Master Developer Neal Freeman. “BoomTown will be the gateway to the development with themed restaurants, a movie theater and now the Polercoaster™. At LakePoint we are focused on partnering with brands and attractions we consider to be the gold standard in their industries, and we are excited we have done so by working with US Thrill Rides to acquire the unique Polercoaster™.”

First phase of the LakePoint Sporting Community will open in 2014.

Joe Kleimanhttp://wwww.themedreality.com
Raised in San Diego on theme parks, zoos, and IMAX films, InPark's Senior Correspondent Joe Kleiman would expand his childhood loves into two decades as a projectionist and theater director within the giant screen industry. In addition to his work in commercial and museum operations, Joe has volunteered his time to animal husbandry at leading facilities in California and Texas and has played a leading management role for a number of performing arts companies. Joe previously served as News Editor and has remained a contributing author to InPark Magazine since 2011. HIs writing has also appeared in Sound & Communications, LF Examiner, Jim Hill Media, The Planetarian, Behind the Thrills, and MiceChat His blog, ThemedReality.com takes an unconventional look at the attractions industry. Follow on twitter @ThemesRenewed Joe lives in Sacramento, California with his wife, dog, and a ghost.
Share
Facebook
Twitter
Linkedin
Email
Print
WhatsApp
Pinterest
ReddIt
Tumblr
Previous articleTivoli to Open New Hotel with Arp-Hansen Group in 2016
Next articlenWave Pictures Introduces Red Star’s “The Lost World 4D” at IAAPA Attractions Expo