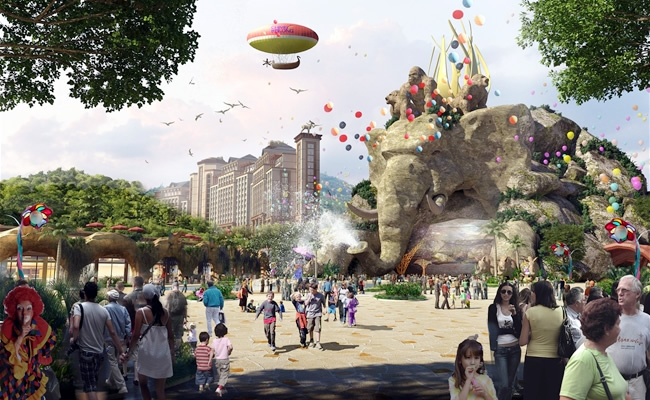 On Dec 28 2016, construction began on the main project and hotel cluster of the Qingyuan Chimelong International Forest Resort – a park featuring forest and wildlife themes. The park will feature an 88-metre tall iconic building named “Giraffe Castle” and the world’s largest aviary, occupying an area of 5 hectares. The four-theme hotel will provide a total of 3,500 rooms where visitors will be able to appreciate realistic animal ecology within the comfort of their hotel or balconies of their hotel rooms. This is the first development phase of Yinzhan Zone – one of the three major attraction zones in Qingyuan Chimelong International Forest Resort. It is scheduled to open in 2019 as part of Chimelong’s 30th anniversary celebration.

The design of Qingyuan Chimelong International Forest Resort breaks away from the old stereotype of a single-hotel and theme park, the new theme park will assimilate the natural geography and landscape to create three distinct theme zones namely the Yinzhan Zone, Yingju Zone and Huaqiao Farm Zone. Within each zone, a theme community will be built in line with the geomorphological and environmental characteristics of the zone.

On December 6, 2016, the Qingyuan Municipal Government announced the planned construction of Guangdong Province’s first medium to low-speed maglev train. The planned tourist rapid transport system will have a total length of about 30km. The first 8km to be developed will start at Yinzhan Station in Quangdong, Qingyuan and end at Chimelong International Forest Resort. Construction of the project, costing about 10 billion Yuan, is expected to begin in October next year and be completed by end of 2018. The improvement and upgrading of the transportation system will provide great support for the Chimelong’s project in Qingyuan.

Construction for Yinzhan Zone began as early as November 2015.  As of today, construction of the resource base for the Qingyuan Chimelongj’s collection of rare flora and fauna of the world has is almost complete. Dozens of elephants, giraffes and antelopes have already moved in. The completion of the second and third phases of construction in the near future will see the introduction of a first-class wildlife protection, breeding and research institution and researchers. In the future, the South China Tiger base and an exclusive protection center for very rare animals as well as a world-class genetic storage library and protection base for the world’s flora and fauna will also be built within the Qingyuan Chimelong resort. 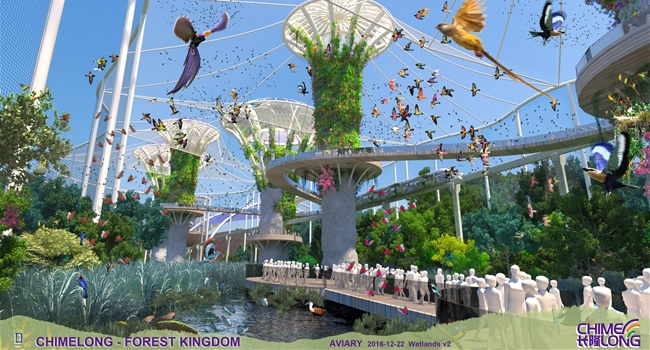 The Yinzhan zone, occupying the largest area of the three zones, is initially designated as forest and animal theme parks featuring a large scale forest resort and hotel clusters complete with commercial facilities. The 100-hectare entrance plaza will be the main theme park entrance plaza for Qingyuan Chimelong International Forest Resort in the future. The center of the entrance plaza will feature a 30-metre high “Animals United” theme sculpture. As with the 20-metre high stingray sculpture at the entrance of Chimelong Ocean Kingdom, upon seeing the gigantic “Animals United” sculpture at the entrance, visitors will be drawn immediately to the mystical kingdom of the forest.

A small commercial township will be built at the entrance plaza, complete with a 280,000 square metre car park that will accommodate 4,500 cars. With an area of 20,000 square metres, the small commercial township is actually not “small” in size. It will feature day and night entertainment for visitors such as international food, cafes, bars, cinemas and leisure shopping. 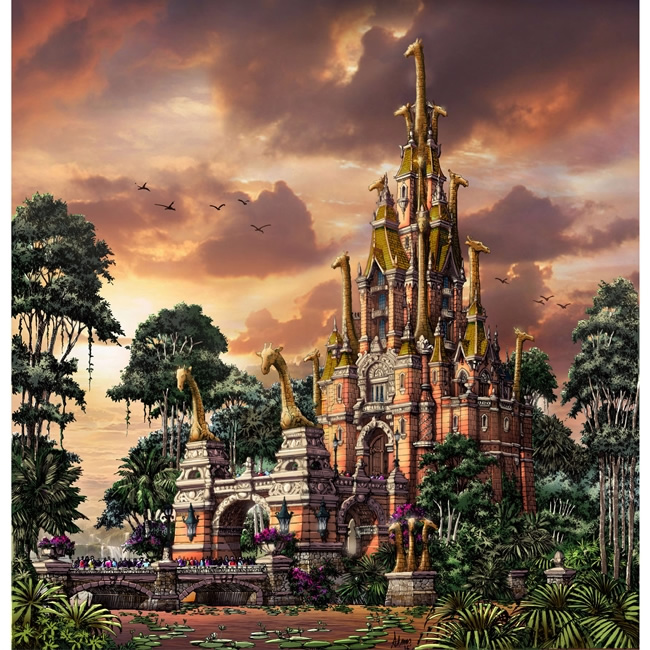 Occupying an area of 3,000 hectares, the first phase of the forest resort will be completed in three years. Upon completion, its iconic “Giraffe Castle” will stand at 88 metres tall and will become the tallest building within a theme park in the world. In addition, a 5-hectare “bird cage” is expected to become the world’s largest aviary. Visitors can enter the “bird cage” to observe freely-flying birds in close range. A “Forest Train” will ply within the forest resort so that visitors can travel through the forest and the “bird cage” for an adventurous experience. There will also be large-scale forest-themed shows – with Giraffe Castle as the central character – featuring top-tier audio, photoelectric, and laser technologies. This super large-scale theme park will also feature forest parades, a5D theatre and a large-scale cartoon park. 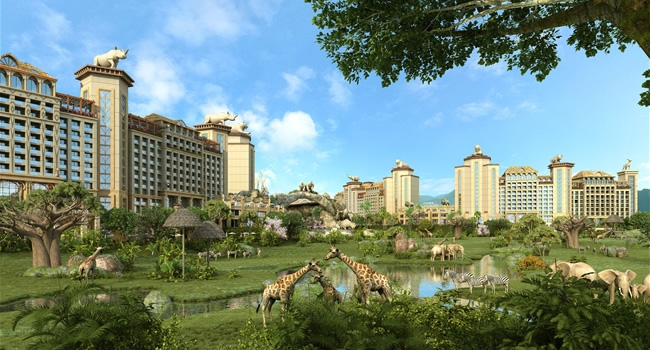 The hotel cluster, which began construction together with the forest resort, will feature 4 hotels with a total of 3,500 rooms. The 4 hotels will bear different themes: namely giraffe, elephant, rhinoceros and zebra. Hotel guests will encounter the theme animal within every corner of the hotel. Chimelong has a White Tiger Restaurant in Guangzhou, but this resort’s will be an upgraded version. Every hotel guest will have the chance to witness for themselves the daily life of giraffes and elephants – within the hotel. As the four theme hotels will be located on both sides of the entrance plaza, hotel guests will be able to appreciate realistic animal ecology on the African savannah, right from their hotel room balcony. The hotel cluster will also sport an international conference and exhibition center with a huge 5,500 square metre conference room and 20 to 30 medium-size multi-function meeting rooms to form an integrated exhibition complex.

In addition, a large-scale water park will also be built along the water boundary surrounding the Yinzhan zone.

Joe Kleimanhttp://wwww.themedreality.com
Raised in San Diego on theme parks, zoos, and IMAX films, InPark's Senior Correspondent Joe Kleiman would expand his childhood loves into two decades as a projectionist and theater director within the giant screen industry. In addition to his work in commercial and museum operations, Joe has volunteered his time to animal husbandry at leading facilities in California and Texas and has played a leading management role for a number of performing arts companies. Joe previously served as News Editor and has remained a contributing author to InPark Magazine since 2011. HIs writing has also appeared in Sound & Communications, LF Examiner, Jim Hill Media, The Planetarian, Behind the Thrills, and MiceChat His blog, ThemedReality.com takes an unconventional look at the attractions industry. Follow on twitter @ThemesRenewed Joe lives in Sacramento, California with his wife, dog, and a ghost.
Share
Facebook
Twitter
Linkedin
Email
Print
WhatsApp
Pinterest
ReddIt
Tumblr
Previous articleThemed Entertainment Industry Mourns Loss of Universal Creative’s Kathryn Griffiths
Next articleWinners Announced For 12th Annual LA 3-D Movie Festival