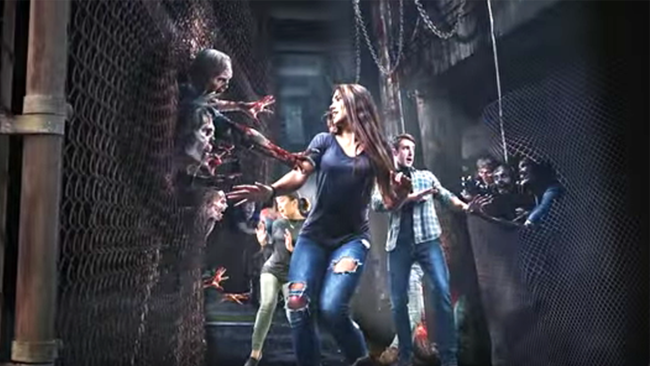 Under the direction of Chris Williams (Art Director) and John Murdy (Creative Director) of Universal Entertainment, Wyatt Design Group has ensured that the specific production aesthetics of The Walking Dead are represented in this new permanent attraction.  From details of prison cell doors and types of Georgian foliage to aged brick texture on the walls and character-inspired props, WDG contributed and helped visually create a truly immersive walk-though experience of The Walking Dead seasons 1-5.  WDG has developed several scenes of this walker (zombie)-filled world, in which the guests follow the footsteps of the survivors, encountering a combination of live, animatronic, and projected walkers…in a completely controlled theatrical environment.

“The key goal of this unusual permanent walk-through attraction is to immerse the guest in the world of The Walking Dead—with as authentic and realistic depiction of memorable moments in the series as possible.  By the time this attraction opens we will have had ‘hands-on’ involvement in its design and execution for about 18 months. That’s a long time for a deep dive into a show like ‘The Walking Dead,’ but it has been a blast and has made all of us huge fans of the series,” observed Larry Wyatt.

Others on the visual design team include: On Track Themes for technical design and project management, lighting design by Radiance Lightworks, and facility architecture by Houston-Tyner Architects.

The concept phase of the project began in early 2015 where Mark Shumate and Jerry Parra of Wyatt Design Group helped finalize the show set concept art and ground plan with Chris Williams and John Murdy. Then during the Schematic Phase, the WDG creative design team (Mark Shumate, Sean Olah, Dave Max, Kevin Mentzer and Meg Cunningham), detailed each scene of the show set, props and dressing—right down to the bloody handprints, smudges, and bullet holes so familiar in the program.  Once the final design was completed and approved by Universal and AMC; including plans, elevations, details, prop layout and lists, and specific color/paint elevations; WDG produced a 150-sheet design bid package describing every wall, flooring and ceiling which was sent to every supplier on the project. 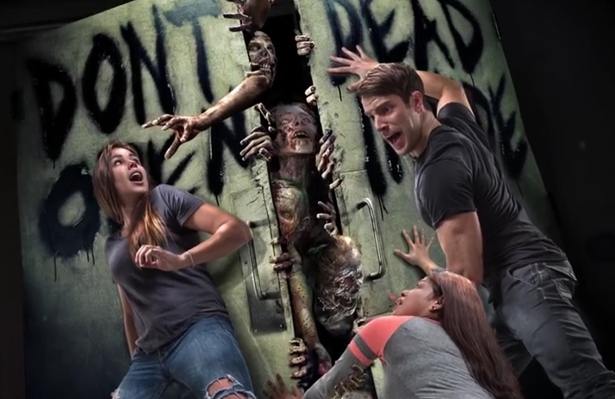 Since the drawings were finalized in September 2015, WDG has been providing further art direction support and clarification on the visual design of the attraction, coordinating with lighting design and all other integration of the mechanical/functional aspects of the show, as well as interfacing with the general contractor and architect to make sure the building is being constructed to our attraction specifications/needs.

The project has gone through a few alterations that WDG has helped to resolve that will make the attraction even better.  “It’s very rewarding to see all the details we have labored over the past year coming together and being installed in the project,” states Sr. Art Director Meg Cunningham.

On the project from concept stage through final installation, WDG has been able to provide almost daily hands-on interaction over design/build timeline, as Universal Studios Hollywood is located just minutes away from their offices in Pasadena, CA.  Which is unusual for WDG who is typically working halfway across the globe on master planning and design concepts for leisure destinations and attractions internationally.

WDG is currently providing field art direction, helping approve all aesthetic samples and providing more details, and is on-site frequently. Once the scenic vendor (fabricator) gets on site to install all elements, WDG will help supervise the final treatments of everything.  The project will be launching this summer on July 4, 2016.

Joe Kleimanhttp://wwww.themedreality.com
Raised in San Diego on theme parks, zoos, and IMAX films, Joe Kleiman would expand his childhood loves into two decades as a projectionist and theater director within the giant screen industry. In addition to his work in commercial and museum operations, Joe has volunteered his time to animal husbandry at leading facilities in California and Texas and has played a leading management role for a number of performing arts companies. Joe has been News Editor and contributing author to InPark Magazine since 2011. HIs writing has also appeared in Sound & Communications, LF Examiner, Jim Hill Media, and MiceChat. His blog, ThemedReality.com takes an unconventional look at the attractions industry. Follow on twitter @ThemesRenewed Joe lives in Sacramento, California with his fiancé, two dogs, and a ghost.
Share
Facebook
Twitter
Linkedin
Email
Print
WhatsApp
Pinterest
ReddIt
Tumblr
Previous articleNational Blues Museum Named as Fourth GRAMMY Museum Affiliate
Next articleGoogle and IMAX Announce Partnership to Develop Cinema-Grade VR Camera