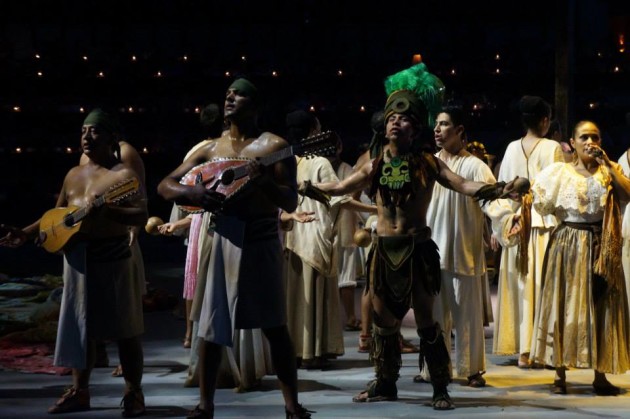 Playa del Carmen, Mexico — Having put on 7,000 performances is a feat that not many theatrical productions can boast. Broadway shows such as Chicago, Les Misérables, Cats and The Lion King each have around that amount. “Xcaret México Espectacular” has put on over 7,500.

Now in its 20th year, “Xcaret México Espectacular” is a play internationally recognized for its artistic and technical quality and for the emotion it arouses by its attachment to values of national identity.

In an emotional ceremony on July 2, a plaque was unveiled to celebrate the 20th anniversary of the legendary production. The unveiling was led by architect Miguel Quintana Pali, president of Experiencias Xcaret, and Leticia Aguerrebere, who has directed the show over the past two decades.

It is a show that highlights the importance of Mexican history, music and traditions and has been enjoyed by more than 16 million viewers from all over the world. More than 300 performers, all from Mexico, take the stage at Gran Tlachco in Xcaret Park 365 days a year to showcase what Mexico is all about through this unique cultural immersion.

Joe Kleimanhttp://wwww.themedreality.com
Raised in San Diego on theme parks, zoos, and IMAX films, InPark's Senior Correspondent Joe Kleiman would expand his childhood loves into two decades as a projectionist and theater director within the giant screen industry. In addition to his work in commercial and museum operations, Joe has volunteered his time to animal husbandry at leading facilities in California and Texas and has played a leading management role for a number of performing arts companies. Joe previously served as News Editor and has remained a contributing author to InPark Magazine since 2011. HIs writing has also appeared in Sound & Communications, LF Examiner, Jim Hill Media, The Planetarian, Behind the Thrills, and MiceChat His blog, ThemedReality.com takes an unconventional look at the attractions industry. Follow on twitter @ThemesRenewed Joe lives in Sacramento, California with his wife, dog, and a ghost.
Share
Facebook
Twitter
Linkedin
Email
Print
WhatsApp
Pinterest
ReddIt
Tumblr
Previous articleSan Diego Zoo Breaks Ground on $68 Million Africa Rocks Exhibit
Next articleMerlin Entertainments Selects accesso as Exclusive Onsite Ticketing and eCommerce Provider for All Company Attractions Worldwide