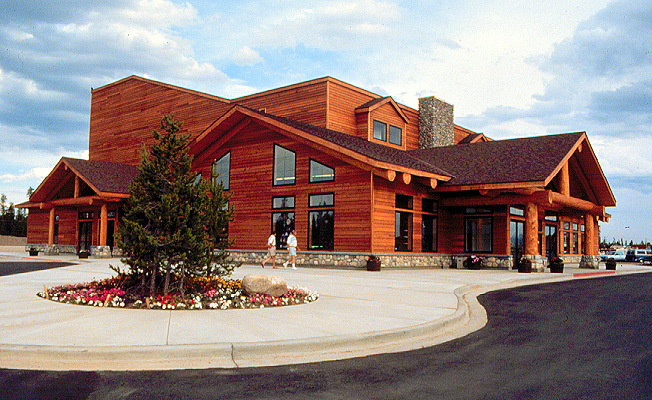 [quote]With the conversion in April, we will immediately start taking advantage of the vastly improved quality, economics and versatility of digital exhibition.  Operational savings today will be redeployed towards future improvements.” — Glenn Hales, General Manager of Yellowstone IMAX Theatre[/quote]

West Yellowstone, MT, USA — D3D Cinema is pleased to announce the giant screen digital conversion of the Yellowstone IMAX Theatre, located at the west entrance to the world renowned Yellowstone National Park.  The new theater will be rebranded as the Yellowstone Giant Screen Theatre.  D3D will begin a multiphase upgrade in April, replacing the 15/70 2D projection system with a NEC 4K projector, Dolby 4K server, QSC 5.1 audio system and a new screen from MDI.  The system is designed to provide a seamless pathway to Phase 2 of the theater’s upgrade plan, which is expected to include 3D and, ultimately, laser illumination.

“The upgrade to a 4K digital solution is a big first step in modernizing the theater,” said Glenn Hales, General Manager of Yellowstone IMAX Theatre.

“D3D Cinema is honored to have been selected by one of the most venerable destination theaters in the history of the giant screen market,” said Don Kempf, President and Founder of D3D. “The Yellowstone Theatre’s approach is very strategic – they will realize massive operational savings in the short term and then invest in future upgrades as new technologies are ready.   And here’s what’s truly remarkable:  the operational savings generated in the first three years alone will likely fund both their current conversion and the coming future upgrades they desire.   It’s just a great example of how the dramatically improved economics of digital 3D are breathing new life into the giant screen market.  Theaters that have been saddled with burdensome economics for decades will not only save hundreds of thousands of dollars per year, but also have the opportunity to redeploy a portion of those savings toward vitally important film marketing activities.”

In addition to the giant screen upgrade, D3D is converting the theater’s signature film,Yellowstone, to 4K digital format.  The theater is scheduled to reopen on May 1 with Yellowstoneand Titans of the Ice Age, a film shot largely in Yellowstone National Park and produced by D3D’s sister company, Giant Screen Films.

Joe Kleimanhttp://wwww.themedreality.com
Raised in San Diego on theme parks, zoos, and IMAX films, InPark's Senior Correspondent Joe Kleiman would expand his childhood loves into two decades as a projectionist and theater director within the giant screen industry. In addition to his work in commercial and museum operations, Joe has volunteered his time to animal husbandry at leading facilities in California and Texas and has played a leading management role for a number of performing arts companies. Joe previously served as News Editor and has remained a contributing author to InPark Magazine since 2011. HIs writing has also appeared in Sound & Communications, LF Examiner, Jim Hill Media, The Planetarian, Behind the Thrills, and MiceChat His blog, ThemedReality.com takes an unconventional look at the attractions industry. Follow on twitter @ThemesRenewed Joe lives in Sacramento, California with his wife, dog, and a ghost.
Share
Facebook
Twitter
Linkedin
Email
Print
WhatsApp
Pinterest
ReddIt
Tumblr
Previous article
Imagine Exhibitions, Rovio, and JRA Join Forces to Create STEAM-Themed Angry Birds Touring Exhibition
Next article
Johnny Darnell Griggs Named Partner at Law Firm Nolan Heimann