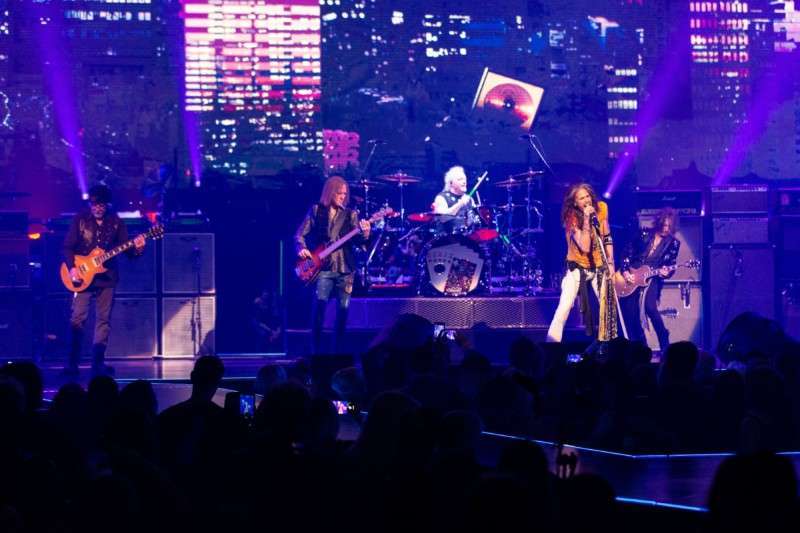 Aerosmith kicked off their new Las Vegas residency “Deuces Are Wild” at the Park MGM theater, featuring an immersive 360 surround sound experience brought to life by Yessian Music. Over the course of only 2 months, the team at Yessian designed and created a 30 minute music and sound design narrative montage containing original soundscapes made almost entirely of Aerosmith material. Utilizing a combination of music stems from the band’s vast catalog, live performances, archival interviews, and behind the scenes sound bites, fans get to experience the deeper story of Aerosmith like never before. It’s a trip down memory lane with a new spin. The soundscape is accompanied by rare photos and videos from the band’s childhood, interviews, concert reels and behind the scenes footage, combined with live performers and actors dispersed around the theater to give the audience a multi-sensory experience.

Yessian’s approach to this project was creatively led by Grammy Award winning Executive Producer, Gerard Smerek. The vision was to create an inspired abstract montage of sound that would transport the audience deep into the historical and emotional world of Aerosmith. Gerard partnered with Sr. Sound Designer and Music Editor, Jeff Dittenber, to realize this challenging and innovative combination of music, sound design, and “generally f•••’d up sounds”. By using the stems from the band’s original recordings, Gerard and Jeff were able to pull the music apart and re-arrange it in a way that has never been heard before, while still maintaining the true essence of the band’s rich musical history. This soundtrack would ultimately drive the visuals being projected on 8 two-story screens hanging over the stage. In the end, the entire 30min show was mixed onsite by re-recording mixer, Scott Gatteño who brought the sound to life through the massive 16.1 THX certified L-Acoustics immersive sound system in the theater. Both Jeff and Scott have a deep history with large venue, immersive projects, while Gerard holds extensive experience in live tour mixing. This combination gave the team tremendous depth, allowing them to pull off this unique concept.

Gerard had this to say about the creative process, “We were inspired by their personal stories of how they grew up, met, signed to a major label, and struggled to stay alive in the bright spotlight of fame. Our goal was to build dynamic, avant-garde pieces of music. To keep this concept focused, and pure Aerosmith, we exploited the parts of their music that spoke to the culture of this time. Easy to say, but we were sitting on years of iconic Aerosmith music, where do we start to bring this incredible story to life?! My inspiration for all this was everything I grew up with musically; concept albums and songs, Queen- Night at The Opera, The Who Quadrophenia -, The Beatles – Revolution #9. It’s like I was waiting for this opportunity my whole life and I felt right at home. Our first step, as always, push the bar as high as we can reach and please ourselves, but the big step was to play it for the band. We knew we achieved our goal when Steven Tyler said ‘very few people get it, you guys get it, you did amazing job’. The band gave us a standing ovation.”

Jeff went on to say, “It’s truly an incredible honor to be entrusted with a catalog of music that holds such legacy. Early on, we were told to make the audience feel like they’re going to another place before the show…like they are getting high through sound. That’s when we knew our creative freedom was boundless. The moment we started pulling the stems together, it created an instant stream of inspiration. We thought of the stems like paint colors. Sometimes we would mix them up into something completely new, and other times isolate them and place them into a space, as if they were right next to you, jamming and working out their parts. Pairing that with rare interview clips from the band, we were able to give the audience a deeper connection and understanding of what makes Aerosmith so unique.”

Yessian was brought onto the project by producer, Steve Dixon and director, Amy Tinkham, of Fireplay to realize the pre-show sound experience. Both Steve and Amy have a rich history producing and directing live performance-driven shows, and this show exceeded all expectations. Throughout the course of the project, Yessian created and mixed alongside Grammy award-winning producer, Giles Martin and his team, collaborated with the Oscar award-winning visual media team, Pixomondo, and worked with the specialists at THX and LAcoustics’ L-ISA immersive sound divisions, who provided the 96 object, 230 speaker sound system in the theater.

“This was one of those dream projects that comes along and you have to continually pinch yourself to make sure it’s real.” Say Brian Yessian, Partner/CCO. “We had been pursuing the Aerosmith residency for over a year and were ultimately able to win them over with our creative approach. Gerard’s creative expertise working with artists, combined with Jeff and Scott’s years of immersive sound production, made for the perfect dream team. It’s a highlight of all of our careers and an amazing show.”

Aerosmith’s Deuces Are Wild Las Vegas residency is on now through January 2020 with performances in 3 week blocks and 6 weeks breaks between. Each night, Yessian Music’s opening preshow creation can be heard starting at 8pm just before the band takes the stage setting the tone for the evening.

Joe Kleimanhttp://wwww.themedreality.com
Raised in San Diego on theme parks, zoos, and IMAX films, Joe Kleiman would expand his childhood loves into two decades as a projectionist and theater director within the giant screen industry. In addition to his work in commercial and museum operations, Joe has volunteered his time to animal husbandry at leading facilities in California and Texas and has played a leading management role for a number of performing arts companies. Joe has been News Editor and contributing author to InPark Magazine since 2011. HIs writing has also appeared in Sound & Communications, LF Examiner, Jim Hill Media, and MiceChat. His blog, ThemedReality.com takes an unconventional look at the attractions industry. Follow on twitter @ThemesRenewed Joe lives in Sacramento, California with his fiancé, two dogs, and a ghost.
Share
Facebook
Twitter
Linkedin
Email
Print
WhatsApp
Pinterest
ReddIt
Tumblr
Previous articleMickey and friends headed to Disneyland Resort in trio of new attractions
Next articleBirket Engineering updates Galaxy Macau’s Fortune Diamond with Alcorn McBride technology