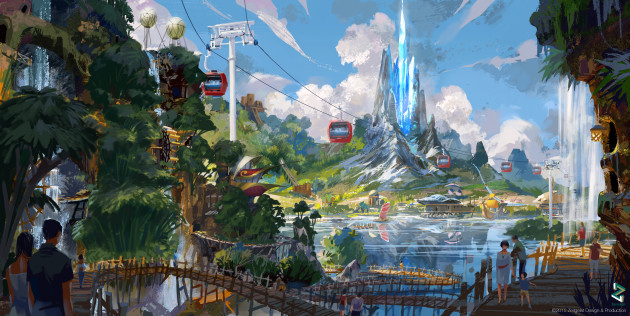 Located approximately 60 minutes by toll road southwest of Indonesia’s capital city of Jakarta, the park will encompass some 40 hectares of stunning canyons, verdant jungles, and ancient riverbeds in the shadow of two volcanoes and introduce the nation of 250-million people to it’s first world-class theme park resort.

Bucking the trend of Hollywood “studio” theme parks and IP-based attractions that attempt to capitalize on American motion picture franchises in regions of the globe where they have little relevance, the Zeitgeist design celebrates the site’s impressive natural setting and Indonesian home with a rich and compelling original backstory and a collection of adventure-themed rides, shows, and attractions.

Like a motion picture or first-person video game, the park features an immersive world divided into six distinct territories, each home to a unique community of characters who live in accord with one another — a metaphor for Indonesia’s dictum “unity in diversity.” Interactive elements utilizing wristbands and smart phones will bring the tale to life in ways yet unseen.

Dense jungles, botanical gardens, and an expansive lake are just some of the natural highlights of the dynamic equatorial site that hopes to garnish the industry’s coveted “most beautiful theme park” award annually upon opening. Two family hotels and a retail/entertainment center will be located just outside the park’s main gate. –

“Our strategy is to create a theme park filled with original stories that can be told through the MNC media network, which controls the largest market share in Southeast Asia,” said MNC chairman Hary Tanoesoedibjo. “The result will be a fantastic, safe, and well-maintained family destination that tourists will flock to and Indonesians will be proud of.”

Over a dozen additional industry folk — including many of the hands and minds behind some of the most beloved Disney and Universal parks and attractions — are scheduled to join the Zeitgeist team to produce the schematic design and detailed design packages and ultimately travel to the site for installation.

“There is nobody in the business like Ryan Harmon, who has developed groundbreaking creative, as well as managed design and production teams for the some of the most successful owner/operators and design firms over the past quarter century,” said Seth Wang, Senior Vice President, Parks at MNC. “The team that Ryan assembled at Zeitgeist is world-class and the concepts they conjured up thrilled our chairman and far exceeded our board’s expectations.”

“We are humbled to be chosen by our friend Seth Wang and MNC Group to develop the Lido Lakes theme park from the proverbial blank sheet of paper,” said Harmon. “The site is beautiful and the company has a rare vision to create something fresh and exciting — and do things the right way. Our goal is to spend the next four years designing and producing the most beautiful, magical, and immersive family entertainment experience on earth.”

Joe Kleimanhttp://wwww.themedreality.com
Raised in San Diego on theme parks, zoos, and IMAX films, Joe Kleiman would expand his childhood loves into two decades as a projectionist and theater director within the giant screen industry. In addition to his work in commercial and museum operations, Joe has volunteered his time to animal husbandry at leading facilities in California and Texas and has played a leading management role for a number of performing arts companies. Joe has been News Editor and contributing author to InPark Magazine since 2011. HIs writing has also appeared in Sound & Communications, LF Examiner, Jim Hill Media, and MiceChat. His blog, ThemedReality.com takes an unconventional look at the attractions industry. Follow on twitter @ThemesRenewed Joe lives in Sacramento, California with his fiancé, two dogs, and a ghost.
Share
Facebook
Twitter
Linkedin
Email
Print
WhatsApp
Pinterest
ReddIt
Tumblr
Previous articleAl Ahli Holding Group to Build Rethink-Designed 20th Century Fox World Theme Park and Resort in Dubai
Next articlePHOTO: Mako™ Design Team On-Site at SeaWorld Orlando