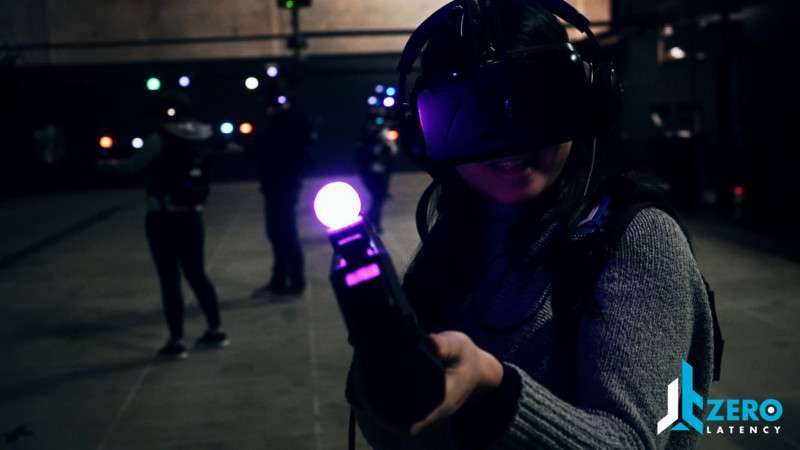 Zero Latency today unveiled an industry-leading ability to accommodate 8-simultaneous players in a free-roam VR game, up from the prior record of 6 players currently held by the company. The first Zero Latency-powered VR game arena to showcase 8-player free-roam VR gaming to the public is the 4,200 square foot arena in Melbourne, Australia. At least three new arenas and two currently operating arenas will introduce 8-player capability this year in their respective cities.

There are 8 Zero Latency-powered arenas operating across the globe, spanning from 2,000 square feet to an industry-leading 4,200 square feet of gameplay area. These arenas have no internal physical walls or obstacles, which allow teams to freely roam, walk, explore, and fight together through different virtual terrains. Players see each other as full-motion avatars and stay in constant communication to strategize, call for help, warn their teammates, or banter together.

“It took a team of a dozen people more than half a year to thoroughly upgrade the system from the ground up to expand and balance the technology and gameplay mechanics precisely to accommodate 8 players at once across our lineup of games,” notes Zero Latency Chief Technology Officer Scott Vandonkelaar. “We were already leading the industry by having six players at once and now the biggest hurdle was dealing with the increase in network communications without the wireless systems getting overloaded. There is a lot of traffic to handle with both the game data as well as the VoIP data running in real time.”

The development cycle was followed with a full month of beta-testing 8-player game sessions with the public in Zero Latency’s Melbourne arena followed by pouring over the data and survey results to ensure everything was on the mark.

Every visitor to a Zero Latency arena has the opportunity to lead the pack, be a hero, support the squad, or discover their own role as part of a team in a range of available games, with more currently under development. Players work together to battle hordes of brain-hungry undead in “Zombie Survival,” are whisked to an enchanting and gravity-defying realm in “Engineerium,” or unravel an action-packed deep space mystery in “Singularity.”

“We knew that it wasn’t just a task of allowing more players into a game, which is still important because it allows the great gaming moments to be shared with larger groups of friend and families,” Vandonkelaar continued, “We also needed to push the edges of these fantastic worlds out to make sure all 8 players are exploring, having fun, and immersing themselves in expansive adventures.”

Every playthrough is a unique experience with success measured by both a personal score and a team score. Players stay in contact with each other through Razer integrated headphone / microphone units and are outfitted with OSVR HDK2 virtual reality headsets while wearing a military-grade backpack containing a high-performance Alienware PC gaming computer. They carry a perfectly-weighted, custom-made simulated weapon for game sessions that require firepower.

“There is literally no experience like this in the world right now,” highlights Ruse. “Zero Latency arenas sit squarely at the intersection of social gaming, virtual reality, and hyper-advanced technology, which is exactly where mind-blowing fun and excitement happens. The fact that this company is way out past the cutting edge in free-roam VR gaming is both a motivation and a source of pride for all us.”

There are 5 Zero Latency-powered arenas currently in operation across the United States in addition to locations in Tokyo, Madrid, and Melbourne. With another under construction in Boston to open in July, the company is on the way to a planned 20 arenas worldwide by the end of 2017. Zero Latency was named by Fast Company as one of the Top 10 Most Innovative Gaming companies.

Joe Kleimanhttp://wwww.themedreality.com
Raised in San Diego on theme parks, zoos, and IMAX films, InPark's Senior Correspondent Joe Kleiman would expand his childhood loves into two decades as a projectionist and theater director within the giant screen industry. In addition to his work in commercial and museum operations, Joe has volunteered his time to animal husbandry at leading facilities in California and Texas and has played a leading management role for a number of performing arts companies. Joe previously served as News Editor and has remained a contributing author to InPark Magazine since 2011. HIs writing has also appeared in Sound & Communications, LF Examiner, Jim Hill Media, The Planetarian, Behind the Thrills, and MiceChat His blog, ThemedReality.com takes an unconventional look at the attractions industry. Follow on twitter @ThemesRenewed Joe lives in Sacramento, California with his wife, dog, and a ghost.
Share
Facebook
Twitter
Linkedin
Email
Print
WhatsApp
Pinterest
ReddIt
Tumblr
Previous article
IAAPA leadership speaks out during AAE 2017
Next article
Christie Projectors Bring New Adventures to Life at Harbin Wanda Cultural Tourism City