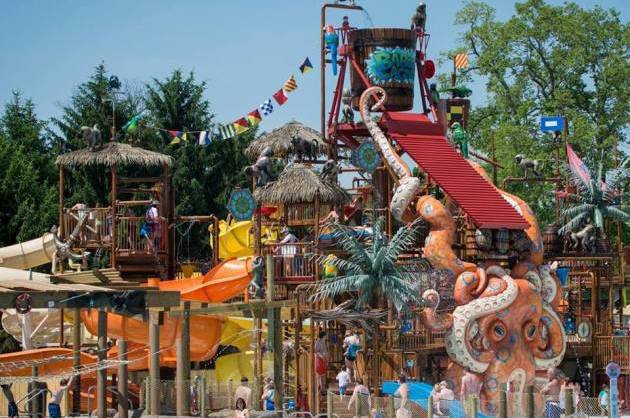 Richmond, BC, Canada — It’s not news that Zoombezi Bay, the waterpark affiliated with the Columbus Zoo and Aquarium, experienced record attendance this past season but the question is what led to this increase in attendance and revenue?

In the waterpark business, when the weather is not hot attendance numbers are traditionally low. Counter intuitively, Zoombezi Bay broke attendance records this past summer season all while the weather was less than favourable.

John Gannon, the facility’s General Manager, shared some insights to fully understand the reasons for these record breaking numbers: “When you have something new to offer before the season opens, it encourages group sales and increases the number seasons pass holders. We experienced the majority of this revenue boost by promoting the brand new Baboon Lagoon, pre-season” explained Gannon.

The new AquaPlay RainFortress, Baboon Lagoon, replaced an existing structure and enhanced the guest experience offering over twice the waterslides and a more immersive play experience. The structure is the centerpiece of the new area designed by ADG. Baboon Lagoon was the anchor and acted as the main draw. Guests stayed not only to play, but to explore the variety of amenities available including retail and dining choices. Food and beverage sales grew over 10% in the 2014 season even though there weren’t any major changes to the offerings. Gannon accredits the main reason for this growth to the new AquaPlay structure.

The approach that Zoombezi Bay took with the AquaPlay theming mirrored the zoo’s strategy of putting animals from the same natural habitat together. Both the baboons and the blue ringed octopus live near the west coast of Africa. “The Columbus Zoo design team came up with initial idea for the structure, but all we knew was that we wanted it animal themed. I give a lot of credence to WhiteWater and their design team for taking our idea and running with it. There were tiny details that they really perfected,” John Gannon commented.

All the hard work paid off, as Zoombezi Bay’s Baboon Lagoon won an IAAPA Best New Product Award for the best Themed Exhibit Design for Zoos, Aquariums, and Museums. Congratulations to the entire design team at Columbus Zoo and at WhiteWater for taking a concept and truly bringing it to life.

Joe Kleimanhttp://wwww.themedreality.com
Raised in San Diego on theme parks, zoos, and IMAX films, Joe Kleiman would expand his childhood loves into two decades as a projectionist and theater director within the giant screen industry. In addition to his work in commercial and museum operations, Joe has volunteered his time to animal husbandry at leading facilities in California and Texas and has played a leading management role for a number of performing arts companies. Joe has been News Editor and contributing author to InPark Magazine since 2011. HIs writing has also appeared in Sound & Communications, LF Examiner, Jim Hill Media, and MiceChat. His blog, ThemedReality.com takes an unconventional look at the attractions industry. Follow on twitter @ThemesRenewed Joe lives in Sacramento, California with his fiancé, two dogs, and a ghost.
Share
Facebook
Twitter
Linkedin
Email
Print
WhatsApp
Pinterest
ReddIt
Tumblr
Previous articleJackson Hole Wildlife Film Festival Announces 2015 Media Competition Categories
Next articleSennheiser Celebrates Seventieth Anniversary