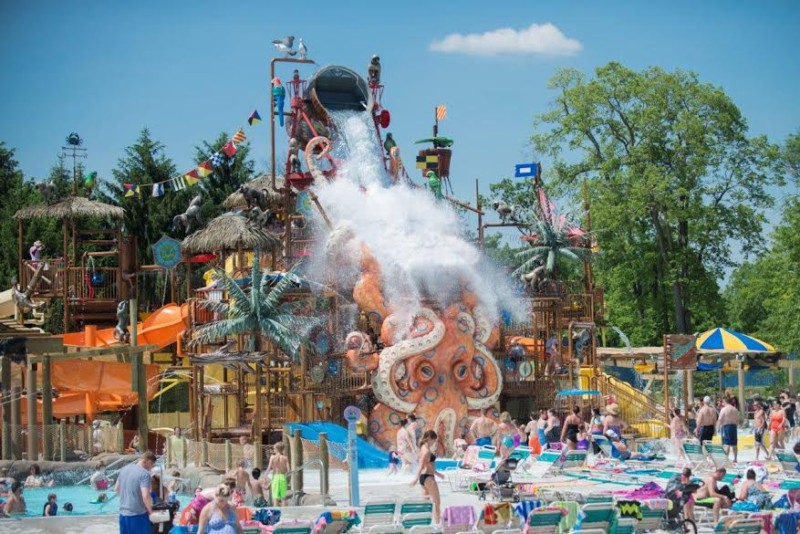 [quote]WhiteWater’s design studio can make whatever a park’s unique needs call for.” — John P Gannon, General Manager of Zoombezi Bay and The Columbus Zoo and Aquarium[/quote]

Richmond, BC, Canada — Zoombezi Bay guests were introduced to 16 life-sized baboons and a sprawling octopus on May 17 when the Ohio waterpark revealed their brand new, custom themed AquaPlay RainFortress unit named the Baboon Lagoon. The brand new $4.5 million interactive play structure is surrounded by a heated pool and has over 90 interactive water elements, 9 waterslides and is topped with a 1000 gallon tipping bucket.

John P. Gannon, General Manager of Zoombezi Bay and The Columbus Zoo and Aquarium comments, “we are thrilled to introduce Central Ohio to the most exciting multi-level play structure that the area has ever seen. WhiteWater was able to theme the structure to our unique requests. Zoombezi Bay is owned by The Columbus Zoo and Aquarium; and as such; we wanted a structure that was full of animal surprises.”

WhiteWater has been dedicating resources to improving theming capabilities that allows us to meet unique requirements such as those put before us by Zoombezi Bay. WhiteWater’s theming and production manager, Chris Biancofiore, heads up the strategic changes that are made within the theming department, “We have made considerable improvements over the years in design and pushing the boundaries on what we can do.” WhiteWater has committed to producing the highest quality theming products in the industry by investing in our people and in new technology.

All 16 realistic baboons and the giant, life-like blue-ringed octopus started only as giant blocks of Styrofoam. Once they were shaped and hand-carved, each piece was treated and painted, also by hand, to ensure the highest level of detail. Zoombezi Bay opened to the public on May 17th to rave reviews and will enjoy a fun and busy summer season.

Joe Kleimanhttp://wwww.themedreality.com
Raised in San Diego on theme parks, zoos, and IMAX films, InPark's Senior Correspondent Joe Kleiman would expand his childhood loves into two decades as a projectionist and theater director within the giant screen industry. In addition to his work in commercial and museum operations, Joe has volunteered his time to animal husbandry at leading facilities in California and Texas and has played a leading management role for a number of performing arts companies. Joe previously served as News Editor and has remained a contributing author to InPark Magazine since 2011. HIs writing has also appeared in Sound & Communications, LF Examiner, Jim Hill Media, The Planetarian, Behind the Thrills, and MiceChat His blog, ThemedReality.com takes an unconventional look at the attractions industry. Follow on twitter @ThemesRenewed Joe lives in Sacramento, California with his wife, dog, and a ghost.
Share
Facebook
Twitter
Linkedin
Email
Print
WhatsApp
Pinterest
ReddIt
Tumblr
Previous articleCruden Opens Company’s First Chinese Hi-Tech Racing Center in Guangzhou
Next articleThinkwell Thinks Globally With New Offices in Beijing and Abu Dhabi

ICON Leisure, through web of partnerships, to offer consulting for aquatic attractions