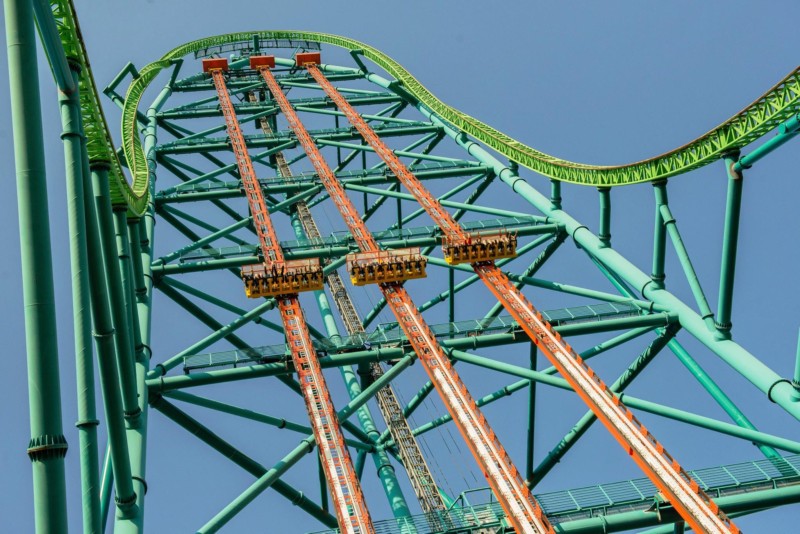 [quote]Today strengthens the reputation of Six Flags as a trailblazer in providing innovative, cutting-edge entertainment for visitors of all ages, all while enhancing its legacy as one of the greatest theme park experiences anywhere in the world.” — New Jersey Lt Governor Kim Guadagno[/quote]

Zumanjaro: Drop of Doom stands a staggering 41 stories tall. Connected to the iconic Kingda Ka roller coaster—the 45-story monster that ranks as the world’s tallest and fastest coaster—Zumanjaro hoists riders 415 feet into the sky and plummets them back to Earth at speeds of up to 90 miles per hour.

“Zumanjaro solidifies Six Flags’ dominance as the Northeast’s only destination for thrills. It is on every adrenaline junkies’ must-do list,” said John Fitzgerald, park president. “Zumanjaro is precisely the type of world-class, record-breaking attraction that our guests have come to expect from Great Adventure.”

Three soaring Zumanjaro towers stand on the face of the massive Kingda Ka coaster. Each drop tower features a gondola with eight riders. While anxious riders buckle into their floorless seats, Kingda Ka trains launch right toward them at speeds of up to 128 miles per hour.

The trio of gondolas rises to the top of the tower in approximately 30 seconds. Riders pause for a few terrifying moments 41 stories in the air—even higher than London’s Big Ben and twice as tall as Lady Liberty—allowing them to catch a glimpse of the skyscrapers in Philadelphia 52 miles to the southwest before gravity plunges them back to ground level in less than 10 seconds.

“We are thrilled that such an incredible venue is in New Jersey to provide unforgettable memories for so many visitors each and every year,” said New Jersey Lt. Governor Kim Guadagno.

The name “Zumanjaro” was inspired by the African influences of Safari Off Road Adventure, the attraction that combined Six Flags Great Adventure and Safari into the world’s largest theme park in 2013. Safari Off Road Adventure takes guests on an exhilarating, interactive and up-close journey that features 1,200 animals from six continents including elephants, rhinos, tigers, giraffes, lions, bison, kangaroos and more.

Zumanjaro: Drop of Doom was recently named the No. 3 most thrilling ride in the U.S. according to USA Today.

Joe Kleimanhttp://wwww.themedreality.com
Raised in San Diego on theme parks, zoos, and IMAX films, Joe Kleiman would expand his childhood loves into two decades as a projectionist and theater director within the giant screen industry. In addition to his work in commercial and museum operations, Joe has volunteered his time to animal husbandry at leading facilities in California and Texas and has played a leading management role for a number of performing arts companies. Joe has been News Editor and contributing author to InPark Magazine since 2011. HIs writing has also appeared in Sound & Communications, LF Examiner, Jim Hill Media, and MiceChat. His blog, ThemedReality.com takes an unconventional look at the attractions industry. Follow on twitter @ThemesRenewed Joe lives in Sacramento, California with his fiancé, two dogs, and a ghost.
Share
Facebook
Twitter
Linkedin
Email
Print
WhatsApp
Pinterest
ReddIt
Tumblr
Previous articleA Tropical Cove Comes In With the Tide at Detroit’s Michigan Science Center
Next articleCharacter Themed Rooms Coming to Tokyo Disneyland Hotel