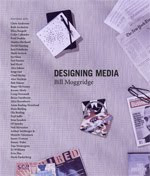 NEW YORK — Designing Media, written by the Smithsonian’s Cooper-Hewitt Director Bill Moggridge and published by MIT Press Nov. 29, examines connections between old and new media. In his book, Moggridge describes the changing media landscape and the growth of new patterns of media consumption. The long-dominant forms—television, radio, newspapers, magazines and books—have had to respond to emergent digital media. Newspapers have interactive websites, television broadcasts over the Internet and books are published in both electronic and print editions.

“The convergence between new and traditional media is in turbulent flux, with the models for successful designs yet to be evolved,” said Moggridge. “I found it fascinating to learn from so many people who have a track record of innovation and design excellence.”

“Bill’s book is an insightful and exciting look into the past and future of media and all the players involved,” said Wayne Clough, Secretary of the Smithsonian. “A legend in the world of design in his own right, Bill is breaking new ground as the director of the Smithsonian’s Cooper-Hewitt, National Design Museum.”

Moggridge writes about innovations in media that rely on contributions from a crowd or community: how the band OK Go built a following using YouTube, how real-time connections between dispatchers and couriers inspired Twitter, how a BusinessWeek blog became a quarterly printed supplement of the print magazine and how e-readers have evolved.

In the book, Ira Glass compares the intimacy of radio to that of the Internet; the producer of PBS’s Frontline supports the program’s investigative journalism by putting documentation of its findings online and the developer of Google’s Trendalyzer software describes its beginnings as animations that accompanied lectures about social and economic development in rural Africa. At the end of each chapter, Moggridge comments on the implications for the design of media.

Designing Media is illustrated with hundreds of color images and includes a DVD and website with excerpts from all of the interviews. Both pdfs of the chapters and QuickTimes of the interview segments can be viewed and downloaded at www.designing-media.com. Cooper-Hewitt is planning an educational panel and other public programs for the spring of 2011 and the book is currently available for sale at the Shop at Cooper-Hewitt.

Moggridge designed the first laptop computer, the Grid Compass, launched in 1982. He describes his career as having three phases, first as a designer with projects for clients in 10 countries, second as a co-founder of IDEO, where he developed design methods for interdisciplinary design teams, and third as a spokesperson for the value of design in everyday life, writing, presenting and teaching—supported by the historical depth and contemporary reach of Cooper-Hewitt.

A Royal Designer for Industry and 2010 winner of the Prince Philip Designers Prize, Moggridge pioneered interaction design and is one of the first people to integrate human factors into the design of hardware and software. He has been a trustee of the Design Museum in London, Visiting Professor of Interaction Design at the Royal College of Art and Consulting Associate Professor in the design program at Stanford University. He was honored with the Lifetime Achievement Award at Cooper-Hewitt’s National Design Awards in 2009 before joining Cooper-Hewitt as director in 2010.

The MIT Press is the only university press in the United States whose list is based in science and technology, and is committed to exploring new fields and new modes of inquiry. MIT Press publishes about 200 new books a year and more than 30 journals. They are a major publishing presence in fields as diverse as architecture, social theory, economics, cognitive science and computational science, and have a long-term commitment to both design excellence and the efficient use of new technologies.

Cooper-Hewitt is the only museum in the nation devoted exclusively to historic and contemporary design. Founded in 1897, the museum has been a branch of the Smithsonian since 1967. The museum presents compelling perspectives on the impact of design on daily life through active educational programs, exhibitions and publications.

Judith Rubin
Judith Rubin (rubin.[email protected]) is a leading journalist, publicist, strategist, blogger, content marketing specialist and connector in the international attractions industry. She excels at writing about all aspects of design and technical design, production and project management. Areas of special interest include AV integration and show control, lighting design and acoustics, specialty cinema, digital video and world’s fairs. Judith has ties to numerous industry organizations. From 2005-2020 she ran communications, publications and social media for the Themed Entertainment Association (TEA). In 2013, she was honored with the TEA Service Award. She was development director of IMERSA, and co-chair of the 2014 IMERSA Summit. She was publicist for the Large Format Cinema Association in the 1990s, now part of the Giant Screen Cinema Association (GSCA) and has also contributed to the publications of PLASA, IAAPA and the International Planetarium Society. Already making her mark as a magazine and book editor, Judith joined World’s Fair magazine in 1987, which introduced her to the attractions industry. Launching as a freelancer in the mid 1990s she has contributed to dozens of publications and media outlets including Funworld, Lighting&Sound America, Sound & Communications, Urban Land, The Raconteur and The Planetarian. She joined InPark in 2010. Judith earned a Bachelor of Fine Arts from Pratt Institute. She has lived in New York City and the San Francisco Bay Area, and now makes her home in Saint Louis, where she is active in the local arts and theater community.
Share
Facebook
Twitter
Linkedin
Email
Print
WhatsApp
Pinterest
ReddIt
Tumblr
Previous articleSHARK REEF WATER PARK SELECTS SPLASHTACULAR TO SUPPLY WATERSLIDE AND WATERPARK ATTRACTIONS
Next articleAcademy of Natural Sciences will Offset Energy Use

In the global pandemic, should you be making ventilators?