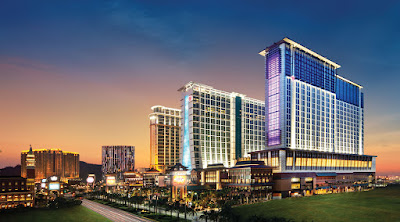 Foremost among the new facilities is the opening of the first of two hotel towers from Sheraton Macao Hotel, Cotai Central, with a second tower opening in early 2013. The hotel is the world’s largest Sheraton at 3,896 guestrooms, as well as the largest hotel in Macao. The hotel’s Kashgar grand ballroom will offer nearly 53,000 square feet (4,900 square metres) of pillarless meeting and event space. And Shoppes Cotai Central adds a second level of duty-free shops, plus additional restaurants and an international food court.

The opening is the most recent benchmark in Sands China’s push to firmly establish Macao as one ofAsia’s leading business and leisure destinations. The opening will further expand the diversity of choices on the Cotai Strip® with additional accommodation, dining, entertainment, retail, gaming and meeting and convention offerings. The company’s Macao investment toward that goal is in excess of US$8 billion to date, and will soon bring Sands China’s combined Cotai Strip offerings to over 9,000 rooms across five international hotels, 1.3 million square feet (120,000 square metres) of meeting and exhibition space, over 600 luxury duty-free shops and more than 57 international restaurants, bars and lounges.

“The opening of the Sheraton Macao Hotel at Sands Cotai Central represents another milestone in my vision for the Cotai Strip,” says Las Vegas Sands and Sands China Ltd. Chairman Sheldon Adelson. “I’m very happy to see Sheraton join our growing family of integrated resorts on the Cotai Strip. Sands China remains committed to establishing Macao as a world centre of tourism and leisure, and Asia’s number one business and leisure destination. The addition of Sheraton Macao Hotel, Cotai Central and its impressive array of luxury accommodation is an important development towards reaching that goal.”

Sands China Ltd. President and Chief Executive Officer Edward Tracy says, “Our team members worked incredibly hard to launch Sands Cotai Central back in April; they’ve worked equally hard to introduce the expanded facilities of Sands Cotai Central to Macao this September. All of us are excited to unveil this latest development and we are already looking forward to serving our visitors with the opening of our next phase in early 2013.”

The opening ceremony will take place on September 20, with exciting entertainment highlights to be announced. More information on Sands Cotai Central is available at www.sandscotaicentral.com.

The Venetian® and The Palazzo®, Five-Diamond luxury resorts on the Las Vegas Strip, and Sands®Bethlehem in Eastern Pennsylvania are the company’s properties in the United States.

In Singapore, the iconic Marina Bay Sands ® is the most recent addition to the company’s portfolio.

Through its majority-owned subsidiary Sands China Ltd., the company also owns a collection of properties in Macao, including The Venetian® Macao, Four Seasons Hotel Macao, and Sands Cotai Central, a 13.7 million square foot 6,400-room complex opening in early 2012 at the company’s COTAI STRIP®development. The company also owns the Sands® Macao on the Macao peninsula.

Las Vegas Sands is also committed to global sustainability through its Sands Eco 360º program and is an active community partner through its various charitable organizations.

About Sands China Ltd.
Sands China Ltd. (HKSE: 1928, Sands China or Company) is a subsidiary of global resort developer Las Vegas Sands Corp. (NYSE:LVS), and a listed company on the Hong Kong Stock Exchange. Sands China is the largest operator of integrated resorts in Macao. The Company owns and operates The Venetian®Macao-Resort-Hotel, The Plaza™ Macao and Sands® Cotai Central at the Cotai Strip® and Sands®Macao on the Macao peninsula. The Company’s integrated resorts contain a diversified mix of leisure and business attractions and transportation operations, including large meeting and convention facilities, a wide range of restaurants, shopping malls, world-class entertainment at the CotaiArena™ and the Venetian Theatre, and high-speed CotaiJet™ ferry service between Hong Kong and Macao. The Company’s property development projects on Cotai have the goal of transforming Cotai into Asia’s premier entertainment and business destination.