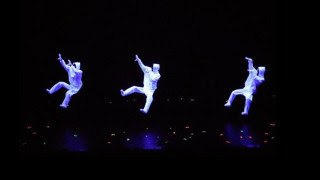 In both cases, Wildfire worked closely with lighting and show designers to help them choose the product that would achieve their creative vision within the unique requirements of the presentation format. “The use of Wildfire UV lighting and effects in these two live TV performances shows their versatility for broadcast and theatrical events, and some of the many ways they can be used in lighting, costume, set and production design,” says Wildfire president John Berardi.

VMA Awards: large and bright
As part of the VMA Awards lighting design mix, 30 Wildfire 400 watt Long Throw floods were employed for their power to illuminate large areas (The 7,100-seat Nokia Theater stage is 180 x 80 feet, said to be the largest in Southern California) and hold their own as a distinct visual element in the brightly lit television environment. “The VMA Awards designers put together an impressive stage, achieving vivid color and surreal effects with an equipment package that included moving lights, projection and the Wildfire Long Throws,” says John Berardi. 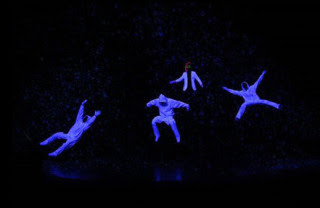 Wildfire products are essential to Fighting Gravity’s living up to its name. Says Berardi, “The performers seem literally to fly and float through the air through coordinating their actions with the interaction of UV lighting and Wildfire UV paints – used on fabrics, props and scenics in a way that highlights certain elements while making others invisible.” Although it did not win the America’s Got Talent competition, Fighting Gravity was selected as a favorite act and starting Oct 1 has embarked on a 25-city tour across the nation with other favorites of Season Five.

Other recent Wildfire projects include Ferrari World Abu Dhabi and the Glow Festival in Santa Monica.

Wildfire Inc. will exhibit at two upcoming trade events: the LDI show for the lighting and theater industry in Las Vegas Oct 22-24 (booth 2406) and the IAAPA show for the themed entertainment and amusement park industry in Orlando Nov 15-19 (booth 671).

Judith Rubin
Judith Rubin ([email protected]) is a leading journalist, publicist, strategist, blogger, content marketing specialist and connector in the international attractions industry. She excels at writing about all aspects of design and technical design, production and project management. Areas of special interest include AV integration and show control, lighting design and acoustics, specialty cinema, digital video and world’s fairs. Judith has ties to numerous industry organizations. From 2005-2020 she ran communications, publications and social media for the Themed Entertainment Association (TEA). In 2013, she was honored with the TEA Service Award. She was development director of IMERSA, and co-chair of the 2014 IMERSA Summit. She was publicist for the Large Format Cinema Association in the 1990s, now part of the Giant Screen Cinema Association (GSCA) and has also contributed to the publications of PLASA, IAAPA and the International Planetarium Society. Already making her mark as a magazine and book editor, Judith joined World’s Fair magazine in 1987, which introduced her to the attractions industry. Launching as a freelancer in the mid 1990s she has contributed to dozens of publications and media outlets including Funworld, Lighting&Sound America, Sound & Communications, Urban Land, The Raconteur and The Planetarian. She joined InPark in 2010. Judith earned a Bachelor of Fine Arts from Pratt Institute. She has lived in New York City and the San Francisco Bay Area, and now makes her home in Saint Louis, where she is active in the local arts and theater community.
Share
Facebook
Twitter
Linkedin
Email
Print
WhatsApp
Pinterest
ReddIt
Tumblr
Previous articlePGAV Destinations Honored by Southeast Construction Magazine with “Best Cultural Project” Award
Next articleSarner provides AV integration for revamp of Science Museum’s biomedical gallery (South Kensington, UK)