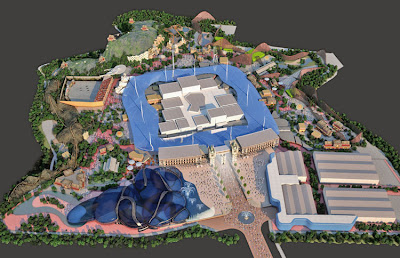 London, UK (October 8, 2012) — Plans to develop a new £2 billion world class entertainment destination on the Swanscombe Peninsula, North Kent, have been unveiled by a consortium of leading UK and international companies.

The new development will transform the 872 acre brown field site into one of the largest regeneration projects in Europe, creating up to 27,000 jobs and integrating the development into the local communities of Dartford and Gravesham.

LRCH has assembled a development team which includes Development Securities plc, a leading development and investment company, the principal land owner Lafarge, and super scale construction company Brookfield Multiplex. The team is supported by a host of leading consultants and operators who will help deliver the scheme.

An independent feasibility study has suggested that the entertainment destination will draw in many additional tourists to the UK each year, making a significant contribution to the economy. The site is on the doorstep of Ebbsfleet International station, which will provide a 17 minute journey time into London, and a two hour journey to Paris.

Tony Sefton, project leader for LRCH, said: “Our vision is to create a world class entertainment destination, the first of its kind in the UK. We are at the start of a long journey, but have been encouraged by the support and buy-in we have had to date. We are particularly pleased with the appetite we are seeing from investors, who consider this a compelling investment proposition.”

He continued: “Post Olympics, this is Britain’s next major regeneration opportunity. Over the next 12-18 months we will be progressing the planning application, while embarking on a wide-reaching programme of community consultation, while securing further commercial agreements with third parties. Our timetable for delivery, including the planning application process and construction timetable, is geared towards completion and opening in 2018.”
LRCH have been working closely with both Dartford and Gravesham Borough Councils, who have both offered support for the project.

In a joint statement, Jeremy Kite, Leader of Dartford Borough Council and John Burden, Leader of Gravesham Borough Council, said: “This development represents a tremendous economic growth opportunity for the region. We have been impressed by LRCH’s commitment to integrating the development with the local community, recognising the many economic and social benefits it promises to deliver.”

Joe Kleimanhttp://wwww.themedreality.com
Raised in San Diego on theme parks, zoos, and IMAX films, InPark's Senior Correspondent Joe Kleiman would expand his childhood loves into two decades as a projectionist and theater director within the giant screen industry. In addition to his work in commercial and museum operations, Joe has volunteered his time to animal husbandry at leading facilities in California and Texas and has played a leading management role for a number of performing arts companies. Joe previously served as News Editor and has remained a contributing author to InPark Magazine since 2011. HIs writing has also appeared in Sound & Communications, LF Examiner, Jim Hill Media, The Planetarian, Behind the Thrills, and MiceChat His blog, ThemedReality.com takes an unconventional look at the attractions industry. Follow on twitter @ThemesRenewed Joe lives in Sacramento, California with his wife, dog, and a ghost.
Share
Facebook
Twitter
Linkedin
Email
Print
WhatsApp
Pinterest
ReddIt
Tumblr
Previous articleExploratorium Partners with Canyon Cinema for Exploration of How How Filmmakers See the World
Next articleFormer Cosmosphere IMAX Becomes Single Projector Digital Dome Theater