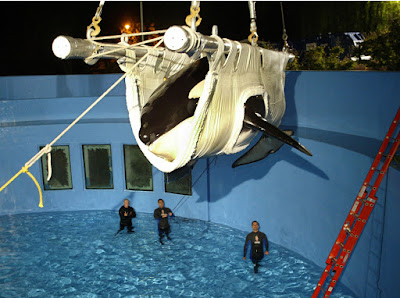 (November 5, 2012) — 2012 has been a contentious year for marine life parks, defending themselves and their animals against increasing attacks, both legal and in the media, from animal rights groups.  IPM News looks at four of this year’s major cases:

PARK: SeaWorld San Diego, SeaWorld Orlando
GROUP: Peta
ACTION: In October, 2011, Peta filed suit in U.S. Federal Court against the parks on behalf of SeaWorld’s captive killer whales, claiming they “were forcibly taken from their families and natural habitats, are held captive at SeaWorld San Diego and SeaWorld Orlando, denied everything that is natural to them, subjected to artificial insemination or sperm collection to breed performers for Defendants’ shows, and forced to perform, all for Defendants’ profit. As such, Plaintiffs are held in slavery and involuntary servitude.”
OUTCOME: On February 8, 2012, U.S. District Judge Jeffrey Miller dismissed the case, stating “the only reasonable interpretation of the Thirteenth Amendment’s plain language is that it applies to persons, and not to non-persons such as orcas.”

PARK: Six Flags Discovery Kingdom
ACTIVIST: Wendy Brunot
ACTION: Brunot documented living conditions for the park’s sole orca, Shouka, and created an online petition for the whale to receive an Orca companion. Over 7,000 signatures were received on the petition. Brunot also led leafleating campaigns and protests at the park between 2010 and 2012.
OUTCOME: Shouka was moved overnight and in secrecy to SeaWorld San Diego on August 20, 2012

PARK: Marineland Canada
GROUP: Ontario Society for the Prevention of Cruelty to Animals
ACTION: The OSPCA made the decision to inspect the park after eight former Marineland employees reported poor animal welfare conditions to the Toronto Star based on continuing water issues and inadequate staffing.  The Canadian Association of Zoos and Aquariums also inspected the park after the Star published its piece on Marineland.  Neither organization found any animal welfare issues of note during their investigations.  On October 7, 2012, five hundred protesters gathered at the entrance to the park, with one hundred fifty of them working their way into the park and interrupting animal shows.
OUTCOME: On October 10, 2012, the Ontario provincial government announced plans to develop and implement new regulations for captive animals throughout the province.

PARK: Resorts World Sentosa’s Marine Life Park
GROUP: Animal Concerns Research & Education Society (ACRES)
ACTION: ACRES petitioned a court in the Philippines to prevent the transport of 27 dolphins from Ocean Adventure Park on Subic Bay to Singapore for the new park, opening December 7, 2012.  The dolphins were caught in the wild off the Solomon Islands between 2008 and 2011 and sent to Ocean Adventure Park for training.  ACRES’ filing with the court illustrated how they believe the dolphins would suffer unnecessary duress in transit and how the export itself may not meet international standards.
OUTCOME: On October 12, 2012, a Phillipine court issued a 72-hour Temporary Environment Protection Order preventing transport of the dolphins, however the order was lifted by another judge shortly after.  On October 29, following appeals from ACRES and other animal welfare advocacy groups, Judge Fernando Sagun, Jr. rescheduled the hearing to reconsider the export ban until November 12, 2012, allowing additional time for the Bureau of Fisheries and Aquatic Resources, Department of Agriculture, and Resorts World Sentosa to receive and review the plaintiffs’ motion.

Joe Kleimanhttp://wwww.themedreality.com
Raised in San Diego on theme parks, zoos, and IMAX films, Joe Kleiman would expand his childhood loves into two decades as a projectionist and theater director within the giant screen industry. In addition to his work in commercial and museum operations, Joe has volunteered his time to animal husbandry at leading facilities in California and Texas and has played a leading management role for a number of performing arts companies. Joe has been News Editor and contributing author to InPark Magazine since 2011. HIs writing has also appeared in Sound & Communications, LF Examiner, Jim Hill Media, and MiceChat. His blog, ThemedReality.com takes an unconventional look at the attractions industry. Follow on twitter @ThemesRenewed Joe lives in Sacramento, California with his fiancé, two dogs, and a ghost.
Share
Facebook
Twitter
Linkedin
Email
Print
WhatsApp
Pinterest
ReddIt
Tumblr
Previous articlePHOTO ESSAY: Damage From Sandy
Next articleInvestindustrial Purchases Remaining Interest in Port Aventura