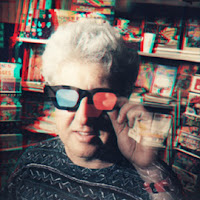 Los Angeles, CA, USA — Ray Zone, considered the “3D King of Hollywood” passed away Tuesday at his home in Los Angeles.  In addition to being a practitioner of the stereographic arts, Ray was a historian and author, as well as advocate for 3D productions for large format theaters, attractions, theme parks.  Eric Kurland, President of the Los Angeles 3-D Club released the following statement:

Ray passed away on Tuesday at his home in Los Angeles. He leaves a long legacy as an author, publisher, historian, photographer, filmmaker and artist. A longtime advocate of stereography as an art form, he earned the title “King of 3-D Comics” for publishing or producing the 3-D separations for over 130 3-D comic books. Ray was a longtime member and past President of the LA 3-D Club, and was currently serving as the club’s Vice President.

InPark News Editor Joe Kleiman has posted his memories of Ray along with three of Ray’s articles on large format and attraction cinema at ThemedReality.com
An obit can be found at The Hollywood Reporter.

Joe Kleimanhttp://wwww.themedreality.com
Raised in San Diego on theme parks, zoos, and IMAX films, Joe Kleiman would expand his childhood loves into two decades as a projectionist and theater director within the giant screen industry. In addition to his work in commercial and museum operations, Joe has volunteered his time to animal husbandry at leading facilities in California and Texas and has played a leading management role for a number of performing arts companies. Joe has been News Editor and contributing author to InPark Magazine since 2011. HIs writing has also appeared in Sound & Communications, LF Examiner, Jim Hill Media, and MiceChat. His blog, ThemedReality.com takes an unconventional look at the attractions industry. Follow on twitter @ThemesRenewed Joe lives in Sacramento, California with his fiancé, two dogs, and a ghost.
Share
Facebook
Twitter
Linkedin
Email
Print
WhatsApp
Pinterest
ReddIt
Tumblr
Previous articleInPark 3D Cover Models Sighted at IAAPA Attractions Expo
Next articleMedialon Show Control at Heart of New "One Piece" Comic Dark Ride in Japan