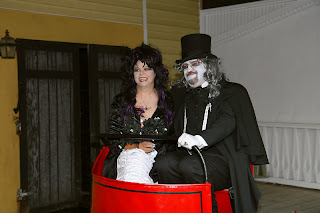 When her twentieth wedding anniversary was approaching, Sue Davis of Vienna, Ohio, knew that she wanted to renew her wedding vows and exactly where she wanted to do it; the Haunted Mansion at Knoebels Amusement Resort in Elysburg, PA

Sue Davis and her husband, Rick are two of the three founders of the Darkride and Funhouse Enthusiasts (DAFE), an organization devoted to the appreciation of “dark attractions,” so this came as no surprise to those that know the couple. Sue said “After seeing some of the fun things that couples have done for their weddings, I wished that Rick and I would have thought of it. Of course we couldn’t go back in time, but we could do something special and unusual for our twentieth anniversary.”

Since weddings on rollercoasters have become rather old-hat, Sue and Rick decided that they should renew their vows at one of their favorite “darkrides” the Haunted Mansion at Knoebels Amusement Resort.

They didn’t have to search far for a minister willing to do it, their friend and fellow amusement park enthusiast, the Reverend Cliff Herring had married more than 50 couples on rollercoasters. A haunted house wedding however, was something new so he jumped at the chance to preside.

The couple and their entourage dressed befitting their surroundings during the park’s Halloween event, Phoenix Phall Phunfest, October 4th. Sue was in a gothic vampire dress, Rick was costumed as a Victorian undertaker and the wedding party was outfitted as vampires.

Hundreds of park guests lined the midway to watch the ceremony.

Following the ceremony the wedding party boarded ride cars for a trip in the dark through the amusement ride before being whisked away in their “limousine”, a classic 1970 Cadillac hearse.

Rick remarked, “The secret to a long marriage is never taking yourselves too seriously; you have to keep things interesting and do the unexpected once in a while.”